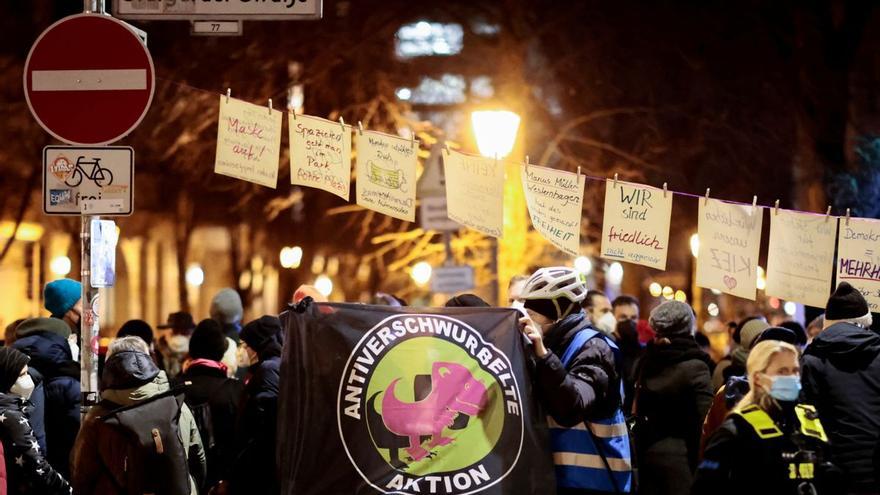 Thousands of people have gone out again this Monday at streets from several cities Germany to protest against the restrictions in the face of the pandemic and before a possible introduction of the mandatory general vaccine against the coronavirus. Some of the demonstrations have been previously registered in order to be held legally; others, however, have taken place spontaneously, as reported, for example, by the Berlin police. In the city of Magdeburg, in the federal state of Saxony-Anhalt, the police have prohibited protesters from accessing parts of the old town.

In Saxony, the far-right party has called protests in more than 150 localities of the federated state, one of the regions where the anti-restriction movement is strongest. According to German agencies, in concentrations health workers participated who oppose the compulsory vaccination already in force for professions in the health system and care for the elderly, as well as militants of the most diverse conspiracy theories.

There have also been counter-demonstrations by citizens who wanted to show their rejection of some marches that they consider unsupportive and irresponsible in the face of the advance of coronavirus infections that have been registered in the country for months. The cumulative incidence in a week has exceeded 528 infections per 100,000 inhabitants in Germany on Monday, a new record, according to data from the Robert-Koch Institute.

Slogans such as “Berlin Rises” or “Monday Walks” have been used on some channels of the Telegram messaging service to summon protesters in all districts of the German capital. Telegram has been precisely in the focus of the German authorities for being one of the main communication channels of different groups participating in the anti-restriction movements. The authorities argue that Telegram serves to coordinate groups of citizens who intend to demonstrate without respecting distance measures or wearing masks, as established by current legislation to prevent crowds of people from generating more sources of contagion.

Also Read  Spain and France intervene in the Mediterranean 4,200 kilos of hashish

The German anti-corona movement has been holding these marches for weeks on Mondays as an attempt to mimic the demonstrations that also began on Mondays in 1989 in various cities of the German Democratic Republic (GDR) and that marked the beginning of the end of the eastern socialist regime. Movements like the lateral thinker or pandemic deniers are thus attempting to draw a historical parallelism between the fall of the authoritarian regime and the current restrictions on individual freedoms introduced by the authorities of the Federal Republic of Germany.

The German secret services have been warning for months about the attempts by far-right and neo-Nazi forces to instrumentalize marches that continue due in part to the growing fatigue of German society after more than two years of the pandemic and restrictions that do not cease. In the middle of last December, the police even dismantled a denialist group that intended to attack the prime minister of Saxony.