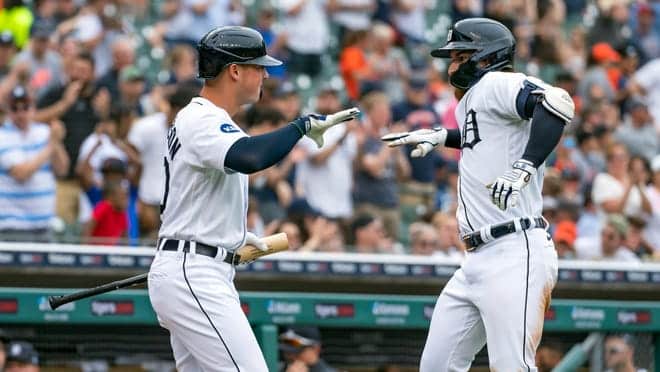 Detroit Tigers catcher Eric Haase jogged around the bases in the fifth inning. He pointed to the sky before touching second base, and, on his way to third base, he finally got to use the bow-and-arrow celebration.

It had been a long time.

His second home run of the season helped the Tigers to a 3-0 victory Saturday in the second of three games against the Baltimore Orioles at Comerica Park, though the bullpen shined brightest after starting pitcher Michael Pineda exited in the second inning.

DOWN ON THE FARM:Tigers send Casey Mize (elbow) back to Lakeland: ‘We’re going to slow him down’

Detroit improved to 11-23 with consecutive wins.

In the second inning, Willi Castro scored Jonathan Schoop with a sacrifice fly to put the Tigers ahead 1-0. Schoop led off with a double, then advanced to third on a fielding error by Orioles left fielder Ryan McKenna.

Castro collected his first hit of the game in the seventh, drilling a solo home run to left field on a first-pitch slider to chase Baltimore left-hander Bruce Zimmermann after 80 pitches.

Miguel Cabrera and Eric Haase notched two-hit performances, as the Tigers’ offense posted three runs on seven hits and one walk with four strikeouts. Schoop, Castro and Javier Báez each produced one hit.

Cabrera finished 2-for-3 with one walk.

The Tigers weren’t expecting a bullpen game, but manager A.J. Hinch didn’t have a choice after the first out in the second inning. Pineda departed with a right hand contusion.

The ball, hit by Ramon Urias with a 105.9 mph exit velocity, deflected off Pineda’s right middle finger. The right-hander walked off the mound and into the clubhouse after a conversation with Hinch and athletic trainer Doug Teter.

Pineda threw 14 of 20 pitches for strikes, retiring all four batters he faced. The 33-year-old has a 3.22 ERA with four walks and 12 strikeouts across 22⅓ innings in five starts this season.

In Saturday’s outing, Pineda used 14 fastballs, three sliders and three changeups. He logged two swings and misses and three called strikes, all with his 91 mph fastball.

The Tigers made three strong defensive plays in the first inning to help Pineda take care of Cedric Mullins, Trey Mancini and Anthony Santander. Those plays, in order, were made by Schoop, right fielder Robbie Grossman and third baseman Jeimer Candelario.

Peralta picks it up

The unexpected departure led Hinch to his bullpen.

Peralta recorded the final two outs in the second and completed 2⅔ scoreless innings. He has a 0.59 ERA with 11 walks and 15 strikeouts over 15⅓ innings in nine games.

He worked around two walks and a second-inning throwing error by Báez, who pulled first baseman Spencer Torkelson off first base. Peralta responded to the mess by striking out McKenna with a slider to end the inning.

Peralta walked the leadoff hitter in the third and fourth innings. Both runners were wiped out by double plays. He completed the fourth to conclude his outing at 37 pitches, 23 for strikes.

He fired two scoreless innings and threw 20 of 26 pitches for strikes. Foley, in his second MLB season, registered his first strikeout this year with an elevated 96.2 mph four-seam fastball against Rougned Odor.

Chafin navigated Candelario’s inning-opening fielding error at third base. He punched out Anthony Bemboom with a fastball and Chris Owings with a slider before Mullins grounded into a force out.

Lefty Gregory Soto, the Tigers’ closer who struggled on Friday night, delivered a scoreless ninth for his fifth save in 2022.