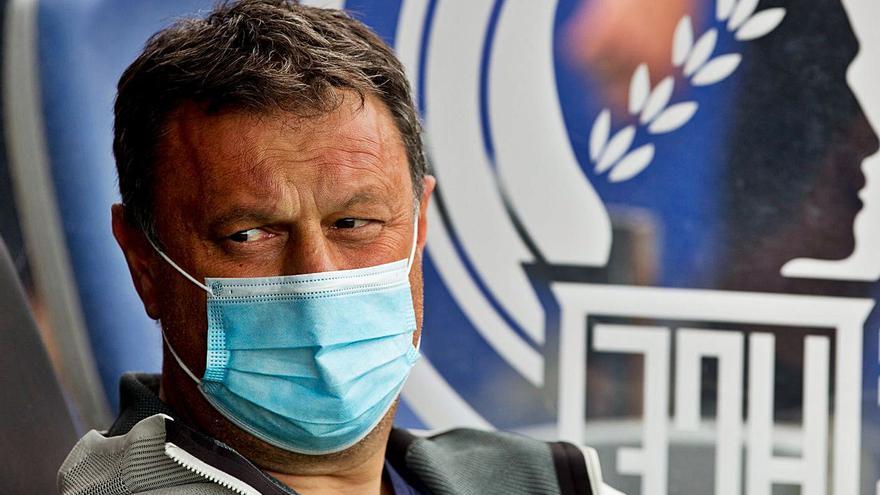 Two months can be an eternity. And in the Hercules even more. Coach Manolo Diaz He completed 60 days yesterday at the blue and white club since his debut on the bench in Orihuela (1-1) on February 14 and has already experienced conflicting and changing situations and sensations, so typical of this club. In just eight weeks, the Madrid coach has gone from the illusion after the victory against the leader Ibiza in his second game to the blow that meant the four subsequent and consecutive defeats to now grab the “burning nail” of the win last Saturday against Badalona (1-0) that has to do well this Sunday (7.30pm) in the difficult visit to the leader Cornellà to continue aspiring to the Pro League and avoid relegation to the fourth category of Spanish football.

Rather tight and reserved by character, Manolo Díaz has managed to keep calm in the worst moments in which the storm and the threat of descent were raging strongly (“Nobody lowers their arms here”, he stressed), but their numbers are disappointing: two wins by the minimum at home (Ibiza and Cornellà), a draw at Los Arcos and four defeats (in their outings to Lleida, La Nucía and Villarreal and at home against Atlético Levante) . Under his direction, the team has always competed (except in La Nucía, where it offered its worst version although it could well score), but it does not govern the games due to its lack of forcefulness in the areas: it continues to miss very clear opportunities and has made defensive errors Unfit for a team aspiring for promotion. On the tactical level, the group improved the pressure on the rival, although it is difficult for them to maintain that level throughout the matches, and their most prominent bet was seen last Saturday with a line of three forwards made up of a debutant in the Rico Pérez, the Uruguayan Pastorini, and two theoretically secondary actors: the young Abde and Manu Garrido.

Díaz was presented on February 10 as an emergency solution after the crisis opened by sports director Carmelo del Pozo with the dismissal of coach David Cubillo and the failed replacement of his second, Alejandro Esteve. Four days later he made his debut in Orihuela with a draw that knew little, but it was a lesser evil because the team played almost the entire second half with one less due to the clumsy expulsion of Erice. His best moment came the following week with the victory at Rico Pérez against the leader Ibiza (1-0) in a remarkable game of the team by intention and winning mentality from the beginning, with the pressure very high and many minutes of play in the game. opponent’s field.

Manolo Díaz in the background in his first match with Hercules in Orihuela on February 14 (1-1). | TONY SEVILLA

But the Hercules roller coaster, with Diaz on board, began to plummet the following week. And not only because of the deserved defeat in the visit to Villarreal B (2-1) in two new defensive mistakes (as in the Orihuela goal), but also because of the serious mishap at the start of the second half of Toro Acuña, which he broke his knee and fibula in his third serious injury of the season, which left the team in “shock” that game, dislodged him from third place and marked a negative inertia for the entire following month.

With Hercules already out of the top three spots in the Pro League, things got worse the following day with the defeat at home (0-1) against Atlético Levante in the penultimate date of the first phase that left them without any mathematical option to fight for the return to professional football and condemned him to the galleys of the fight against the fourth division. The team, greatly diminished by injuries, was thick and failed again the few chances it created.

The descending line was further accentuated at the close of the first phase in La Nucía (2-1), in the worst match of the “Díaz era” at Hercules, with two rude errors by central Teo in the two local goals and a worrying sense of permanent and irreversible defeat. Luck did not accompany the team either in this tough phase of the competition and saw how in La Nucía an apparently legal goal to Abde was annulled with 1-1 and a week before to Manu Garrido for the tie against the Granota subsidiary.

The bad drift of the team forced Del Pozo the following day, March 16, to call the squad to chapter and warn with dismissals in the locker room if commitment was lacking, while reinforcing a downcast Diaz: “The coach is going to finish the season even if he loses all eight games in the second phase.

The rapapolvo had no consequences in the results because the team lost in Lleida (1-0) in the first game of the second phase, with several opportunities again wasted, but the attitude did improve. With no margin for error, Díaz’s roller coaster came back last Saturday against Badalona and this Sunday (7.30pm) he needs a victory in the difficult visit to leader Cornellà to avoid a new ups and downs that could be definitive and totally sinister.