The PP of the Community of Madrid encourages citizens to go to the polls in these regional elections.

Madrileños, to the polls.

Attentive to arithmetic. All the polls give the victory of Isabel Díaz Ayuso for sure, the key is how he wins. Three scenarios in the event that the PP revalidates its dominance and the left fails to surprise.
-Ayuso achieves an absolute majority (69 seats) unlikely but not impossible. It is the idyllic setting for the PP and it could turn national politics upside down.
-Ayuso adds more seats than the three left parties (PSOE, Más Madrid and Unidas Podemos), assuming that it would minimize the influence of Vox.
-Ayuso wins, but needs Vox’s ‘yes’ in the investiture to overcome the left. It is the assumption that they do not like anything in Genoa. And nothing is nothing.

The polls will decide today in Madrid which of the two governments that have maintained the pulse has convinced after the most polarized and dirty campaign in remembrance. This time all the polls except one advocate a comfortable victory for the former president and candidate of the PP. We will see if the ‘Ayusismo’ is capable of capturing a transversal vote, beyond the initials.

The candidate of United We Can, Pablo Iglesias, is already at the La Navata school in the town of Galapagar, waiting for his turn to cast his vote; Edmundo Bal, for his part, is also waiting at the Alfredo Kraus cultural center. 09:3896 million ballots
The acting Minister of the Presidency of the Government of the Community of Madrid, Eugenia Carballedo, has affirmed that 20 candidates have been presented for these regional elections, which has meant the printing of 96 million ballots.

Narciso Michavila, president of the demographic company GAD3, has predicted this morning in RNE a record of participation in some polling stations in Madrid, with determined changes in behavior among voters. “There is no choice without emotion,” he said.

Pedro Sánchez’s PSOE has three challenges in today’s elections. Regaining the presidency of the community, which he has only held from 1983 to 1995. Winning the elections, which he has only achieved in three of the eleven calls held, the last time in 2019. What all the polls discard. Or, at least, not be overtaken as the first force on the left by the union of Más Madrid and Podemos, something that has never happened.

09:25More than 11,000 members of the Local Police and Civil Protection will work in these elections
The Madrid 112 Emergency and Security Agency (ASEM112) will coordinate the work of the 110 Local Police forces of the different municipalities of the region, made up of more than 11,000 personnel, including those of the Municipal Police of the capital, as well as the more than 3,000 volunteers that are part of the 96 Civil Protection groups that will be deployed throughout the territory.

The typical participation in the Madrid regional governments is around 65%. The left trusts everything to a massive mobilization in the southern districts that far exceeds 70% and thanks to the vote of habitual abstentionists it managed to surprise. But, at the same time, the PSOE is already preparing the speech to fit in a great victory for the PP: that the Ayuso phenomenon is not exportable to the rest of Spain and would not imply an extra boost for the popular ones in the face of the next general elections. 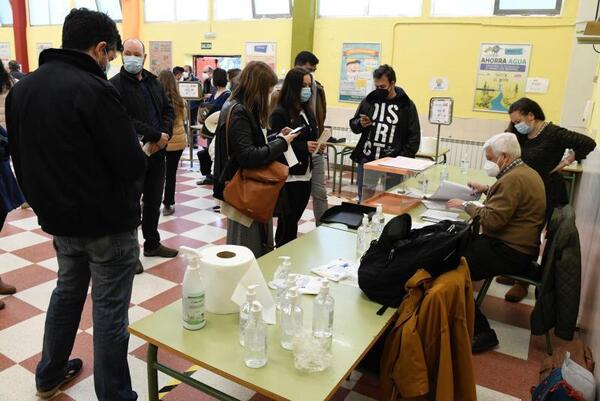 Preparations at the Roma school, in Madrid, for voting in the regional elections / EFE

The proxies of the parties are already prepared in the electoral colleges of the Community of Madrid.

08:59Atypical elections in the Community of Madrid
Just two years later, the Community of Madrid once again holds regional elections. The regional president of the PP, Isabel Díaz Ayuso, decided to break the alliance she had with Ciudadanos last March and now part as the rival to beat. More than five million voters are called to the polls who, as happened in Catalonia last February, are exercising their right to vote in the midst of the pandemic. Covid-19 is very present in elections that, by force majeure, are not just another due to the coronavirus. By Ander Azpiroz.

08:54Pandemic elections
If any person from the polling station or voter begins to have symptoms related to covid, the person in charge of health security who will be in charge of each electoral college will be notified. This will accompany you to a room where you will remain isolated and, if necessary, will contact 112. 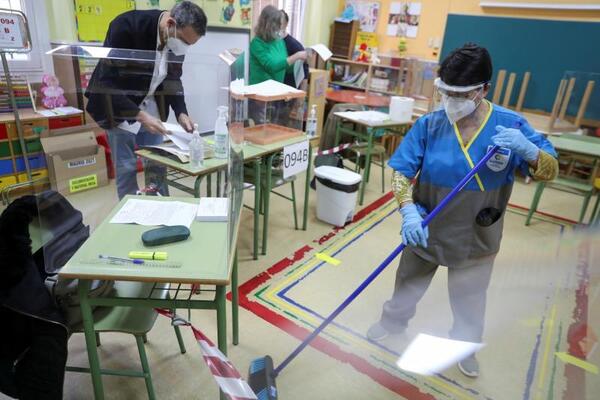 A worker dressed in protective gear sweeps the floor of an electoral college before the start of the Madrid regional elections, in Madrid / REUTERS

Mónica García (Más Madrid) is the only candidate who has already voted by mail. However, he will accompany his father at 10.15 am to vote at the Montserrat school, in the Retiro district. Ángel Gabilondo (PSOE), for his part, will go to Joaquín Turina school at around 11:30 am, in the Ciudad Lineal district.

Pablo Iglesias (United We Can) will be the earliest candidate and will vote around nine in the morning at La Navata school in the town of Galapagar; half an hour later, Edmundo Bal (Cs) will do it at the Alfredo Kraus cultural center; Isabel Díaz-Ayuso and Rocío Monasterio will do it around 10:00.

The members of the electoral tables will have FFP2 masks, a face protection screen and gloves, although they will not wear protective bibs.

Madrilenians vote this Tuesday in polarized regional elections and raised in a national key, where the right hopes to preserve one of its main bastions.

08:18Pandemic electionsThe Health Department of the Community of Madrid has recommended that voters take the vote prepared from home and remain inside the school only for the time necessary to cast their vote.

Good Morning. We started the direct of the regional elections in the Community of Madrid on 4-M. The citizens of the region are called to the polls and must choose between the current regional president Isabel Díaz Ayuso (PP), Ángel Gabilondo (PSOE), Mónica García (Más Madrid), Edmundo Bal (Cs), Rocío Monasterio (Vox) and Pablo Iglesias (We can).