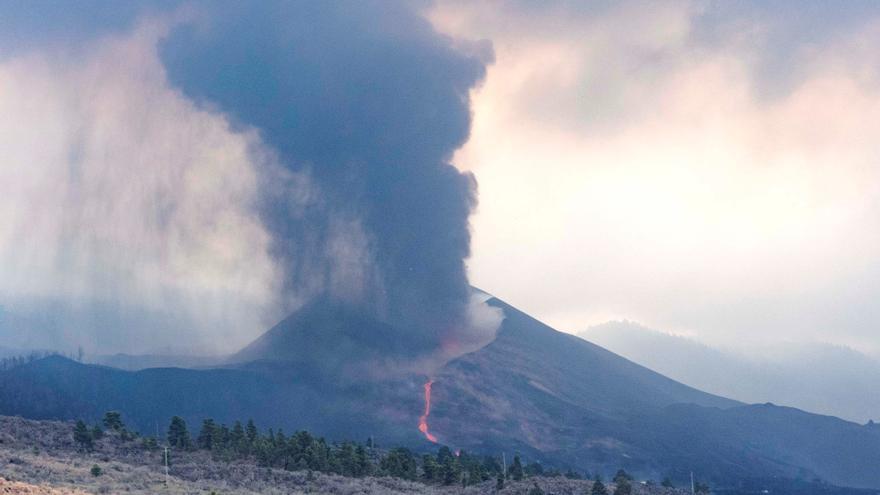 The scientific committee that advises the Canary Islands Volcanic Emergency Plan (Pevolca) foresees that the two fingers of the most active stream of the La Palma volcano come together, go towards the sea and do not go further into the La Laguna neighborhood, that it has been evacuated in its entirety.

The Pevolca technical director, Rubén Fernández, explained that these branches of the northernmost stream of the original one is approximately one kilometer from the coast and the forecast is that if they reach the sea they will form a new strip, although this will depend on the orography of the area and its final trajectory.

Fernández has indicated that in the short term new evacuations are not considered, although everything is conditioned to the evolution of the coladas.

The director of the National Geographic Institute (IGN) in the Canary Islands, María José Blanco, has pointed out that unlike previous days, when they considered that the rest of the washes were “practically stopped”, the latest thermal images have made it possible to verify that there is lava input in all of them.

It is not a “great contribution” of material, but there is “a flow that feeds them slowly”, so it “cannot be ruled out” that these other flows undergo a short-term evolution.

Rubén Fernández has pointed out that some castings reached speeds of up to 250 meters per hour last night, although at the moment it has been lowered to between 20 and 30 meters per hour.

What’s more, The island once again registered an earthquake of 4.5 degrees in the municipality of Mazo this Friday, the largest since the volcano erupted.

This earthquake, located 36 kilometers deep and which was registered at 7.02 in the morning, has the same magnitude as another registered yesterday in the same area and at a similar depth, according to the National Geographic Institute (IGN).

Both went senses with greater or less intensity in practically the entire island of La Palma.

The IGN places the intensity of this earthquake between III and IV on a scale from I to XII, in the range between weak and widely observed.

In less than 24 hours, the authorities have had to evacuate two areas of La Laguna with 400 registered residents, although many of them had already left their homes

So that, Laguna empties. The threat of the wash that runs north of the soccer field of the palm town and that has been swallowed, in part, by the heat of the lava from the Cumbre Vieja volcano, has forced the rest of the neighborhood to be evacuated in a preventive manner. 1,600 residents are registered. On the day of this Thursday there were 300 more who had to leave their homes to their fate – 400 with those on Wednesday night -, taking with them their belongings, animals and last memories.

Images were repeated, for the fifth time since the eruption began, to which the palm trees, unfortunately, are getting used to. The rush, the trucks full of furniture and the collaboration of the security forces and bodies to deal with that the residents of La Laguna could collect all the possible belongings in a short time, was again the keynote of the day in Los Llanos de Aridane.

Under the intense roar of a volcano that has no signs of stopping expelling materials in the short term, the scientists showed a glimmer of hope regarding the area most affected in recent days: “The stream that runs through the north is losing strength as it gains viscosity.”

This was stated by the technical director of Pevolca, Miguel Ángel Morcuende, who stressed, however, that they were forced to make the decision to evacuate all of La Laguna because “We cannot depend on whether the viscosity of the casting is higher or lower”. Its objective: to guarantee the absolute safety of the people who live in that area. The newly displaced in this fifth evacuation order now number 6,400 residents who have had to abandon their homes to the fate of a volcano that is unpredictable. As confirmed by the technical director of Pevolca, at the moment there are 287 people housed in the Fuencaliente hotel and the rest are in other residences or accommodation of family and friends.

The stream that runs further northwest, however, has no signs of stopping. The town of Los Llanos de Aridane is challenging the lava flow that timidly began to fork in the north last Sunday. This eventuality coincides with the change in the morphology of the volcano that, when falling, caused the lava to begin to flow through a different area than it had done until then. This lava, moreover, is much more liquid than the one that emanated in its first weeks of life – it comes from a deeper magmatic reservoir – so it has also flowed down the slope with a much greater speed.

A total of 287 residents of the affected areas are in the Fuencaliente hotel. The rest of the 6,400 evacuees are in other residences or houses of relatives

So much so that in the last 24 hours, according to data provided by the Copernicus satellite yesterday morning, destroyed 90 buildings and buried 24 more hectares. This means that since it erupted, the volcano has destroyed a total of 1,548 buildings and left another 86 in serious condition. It has also destroyed 674 hectares.

The General Directorate of Cadastre, for its part, records a total of 992 buildings affected, of which 809 are homes, 95 tool rooms, 47 industrial buildings, 22 catering and leisure centers and 8 facilities for public use. The lava flows are affecting three municipalities: El Paso, Los Llanos de Aridane and Tazacorte. However, the one that has taken the worst part, in material damage, has been Los Llanos. The lava has buried more than 637 buildings of all kinds in this municipality. It is followed by the destruction in El Paso, which adds 226 buildings affected, and Tazacorte, with 120. As for the area of ​​crops, the 179 hectares destroyed are already exceeded. Of these, 92.97 are banana trees, 50.17 hectares are vineyards and 12.21 are avocados, among other crops. The roads have been affected so far in 43,185 meters of which 65% correspond to Los Llanos, 20% correspond to the municipality of El Paso and 14.68% to Tazacorte.

The affected crop area amounts to 179 hectares, more than a quarter of the total area destroyed by lava flows (26%). Most are banana trees

Air quality will get worse

Meanwhile, concern is growing about the quality of the air near the cone, as it can again lead to home confinement for the inhabitants of the areas surrounding the volcano. When the height of the ash and gas column reaches 2,600 meters – a little lower than on other occasions – the meteorological situation, with high winds, has improved air quality on La Palma. This happens because the wind moves the plume to the west.

Thanks to this change in wind direction, the island’s airport, located in the east, has been able to operate with a certain ease. However, María José Blanco, the director of the National Geographic Institute (IGN) warned that this may change in the next few hours. And the fact is that the island, like the rest of the Archipelago, will experience a new intrusion of Saharan air that will prevent harmful particles from dispersing. Therefore, a worsening of air quality is expected, which in these days has been below the limits imposed by current legislation. Hence, experts insist on the need for the population to wear FFP2 masks in certain most affected areas, such as Los Llanos de Aridane.

The lava has so far buried 43,185 meters of road. A large part is meters from the main highway LP-2, of which the lava has washed away 1,842 meters