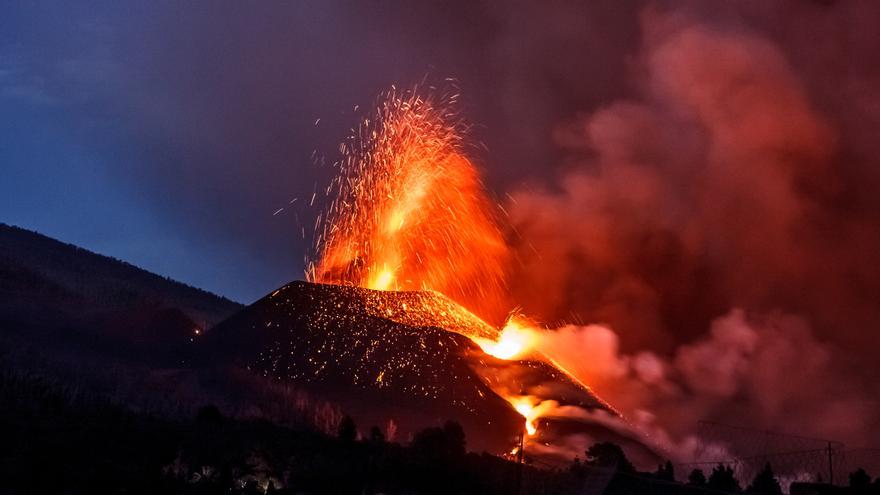 The volcano that last September 19 erupted in The Palm maintains strong ash and lava emission, which in the first case affects the air quality in the Aridane valley and in the second to one of the two access roads to Puerto Naos, in the same municipality.

At a press conference after the meeting of the scientific committee of the Canary Islands Volcanic Emergency Plan (Pevolca), the person in charge of the Volcanic Surveillance network of the National Geographic Institute (IGN), Carmen Lopez, explained that the strong ash emission covers the west and northwest of the island.

Regarding the emission of lava, he has commented that the rate remains high, so that there is a new flow, the one that heads west after flanking the Cogote mountain, and approaches the LP211 highway, which is one of the two through which you now enter and leave Puerto Naos.

The ash goes to the northwest but tomorrow it could reach the rest of the western islands (La Gomera, Tenerife and El Hierro), and affect the operation of the La Palma and La Gomera airports.

Heat waves on a lava flow yesterday, caused by the refraction of light that passes through the air heated by the temperature of the lava pic.twitter.com/sc63nJljkR

Carmen López has stated that the issuance of sulfur dioxide (SO2) continues to decline for the seventh day in a row, and 4,990 tons were recorded on Sunday, while that of carbon dioxide (CO2), which has been 1,500 tons.

As for air quality, he has declared that it remains good and reasonably good in almost the entire island, although last night it worsened in the municipalities of Fuencaliente and Puntagorda, where it became “extremely unfavorable.”

Regarding particles of less than 10 microns, it has indicated that the levels have been acceptable except in Los Llanos de Aridane, where “very high” levels have been reached and the air quality has been “extremely unfavorable”, something that “is maintains”.

The technical director of the Canary Islands Volcanic Emergency Plan (Pevolca), Miguel Angel Morcuende, explained that laundromat 3 has moved until a spill has formed that has constituted lane 11, which threatens to cut off one of the access roads to Puerto Naos.

It is about 200 meters from that road and there is a “clear” probability of reaching it “shortly” if circumstances do not change, which would be an added difficulty for irrigation work and for desalination plants, as well as for the transfer of machinery.

The affected area amounts to 967.85 hectares, 4.2 more than on Sunday, and in terms of people housed, he has stressed that 395 are in a hotel in Fuencaliente and 70 in one of Los Llanos, while 43 dependents are in centers health care on the island.

The number of earthquakes continues to be high although their number has decreased, and in terms of crops affected by the lava, it has been pointed out that there are 281.99 hectares, of which 158.79 correspond to banana trees, 58.76 to vineyards, and 23 , 82 to avocados.

Those affected may request online aid

The Minister of the Interior, Fernando Grande-Marlaska, has advanced during his visit to the island of La Palma that those affected by the eruption of the volcano From this Tuesday, November 2, they will be able to apply online for the aids enabled by the central government for the economic and social reconstruction of the island.

The Minister of the Interior, Fernando Grande-Marlaska greets the scientists of the National Geological Institute. EFE

All this, after Interior and the Government Delegation in the Canary Islands have activated the telematic system. Grande-Marlaska has indicated that the victims can submit applications online through the electronic office available on the Ministry’s website.

➡️Grande-Marlaska explained this Monday during his visit to La Palma the system that allows online application from the electronic headquarters of @interiorgob pic.twitter.com/opOpaY3obP

This has been indicated by the minister in statements to journalists after visiting the Civil Protection device deployed on the island accompanied by the Government delegate in the Canary Islands, Anselmo Pestana, the undersecretary of the Ministry of the Interior, Isabel Goicoechea, and the General Director of Protection Civil and Emergencies, Leonardo Marcos, where he stated that he wants to make it easier for the victims to manage the requests in order to speed up the processing process and “speed up as much as possible” the receipt of aid.

In this sense, he stressed that as they said weeks ago, the Government “will not” leave “anyone behind”, pointing out that the emergency on La Palma “will not end with the extinction of the volcano, but when the palm trees affected by the eruption recover their life before September 19”.

Subsequently, the Minister of the Interior has traveled to the Advanced Command Post, located in the municipality of El Paso, where he greeted the deployed units and received the latest news on the situation of the volcano and the evolution of the lava flows.

Grande-Marlaska has also met with part of the 271 agents of National Police and Civil Guard integrated into the Civil Protection device in assistance tasks to the civil population of La Palma, to whom he has shown his gratitude and the recognition of Spanish society for their work during these weeks.

🗣 “It is a pride to see your effort and dedication, you have the recognition of the whole society” pic.twitter.com/ItggYauIqk

In this meeting, Grande-Marlaska has been especially interested in agents who have lost their homes by the advance of the lava.

Grande-Marlaska is expected to visit parts of the area affected by the volcano and meet with several of the residents affected by the eruption who have had to be relocated to a hotel on the island.