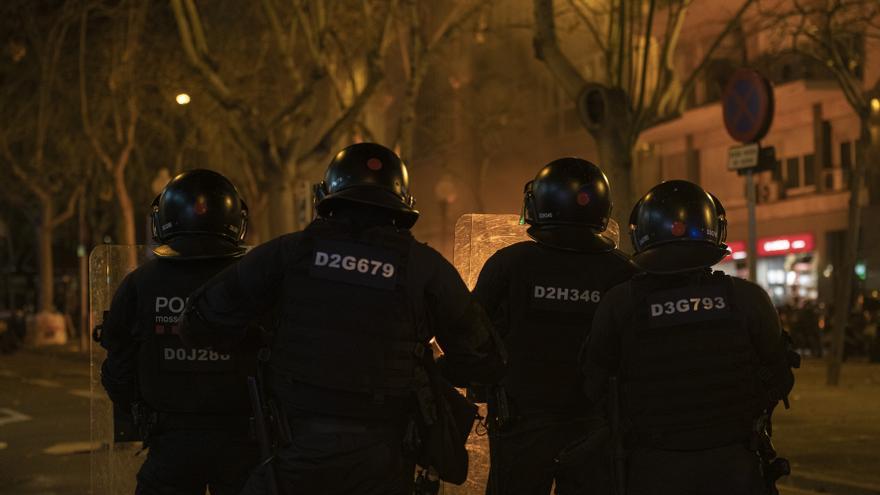 The dome of the Mossos d’Esquadra has been conspired to isolate itself from the “noise” surrounding its management of the riots in the pro-Hasél protests, despite the upset in the Catalan police by the criticisms of JxCat, that rebound have strained the relations of the body with the Minister of the Interior, Miquel Sàmper.

Three nights in a row of riots in Catalonia in the protests against the prison of rapper Pablo Hasél have put the Mossos back into focus, after a young woman lost an eye supposedly by a precision projectile, to the point that Sàmper has urged the Parliament to review the public order model and his party, JxCat, has censured the “unacceptable police response”.

It’s about the first public order crisis in Catalonia since Major Josep Lluís Trapero was reinstated at the head of the Mossos on November 12 and, as happened in the October 2019 riots after the condemnation of the procés leadership, he has brought to light tensions between the Catalan executive – and the groups that support him – and the police autonomic.

In fact, Ciudadanos (Cs) has announced that they will report the Ministry to the Prosecutor’s Office of Interior for prevarication “for the non-defense” of the security forces themselves, whom they have placed “at the feet of the horses.”

Like every Friday Major Trapero has brought together the leadership of the Mossos in the Egara complex, although this Friday in an exceptional way to deal exclusively with the incidents of this week in the protests to demand the freedom of Hasel, which have resulted in 59 detainees, dozens of wounded, including the young woman who has lost an eye, hundreds of burned containers, assaults on the police and damage to urban furniture and shops.

At the meeting in the dome, about forty commanders have defended and praised the actions of the agents on the street during the riots and they have conspired to isolate themselves from the “noise” that sometimes surrounds their interventions, but also from “silence”, in reference to the lack of institutional support.

In addition, the commanders have stressed that the public order model in Catalonia will be decided by the Parliament, the Government and society, and, meanwhile, they will continue working with the tools available to continue providing their service to society, fleeing from corporatism and maintaining self-criticism.

They have also found that the violent actions have clearly targeted the police, with the attack on the Vic police station and the constant throwing of stones at the agents, although they have made it clear that this will not condition the actions of the agents, who will continue to work professionally.

The commands of the Mossos they have lamented that a girl lost an eye in the protests on Tuesday and they have insisted that they are the most interested in clarifying the facts and determining if he was injured when receiving the impact of a precision projectile.

Unlike what has happened in the meeting of the dome, those who have publicly shown their discomfort have been the command unions, who have regretted that the minister Sàmper has not come to his defense in the face of criticism from his party, JxCat.

Speaking to Efe, the general secretary of the Mossos d’Esquadra Command Union (SICME), Jordi Silva, has regretted that the Mossos are in the focus of the political battle whenever there are disturbances in the street, as this week or in the protests against the condemnation of the procés leadership.

The head of the command union, who has asked that the Mossos be left out of the political battle, has denounced that, due to the current post-electoral political context, they are talking more about the police and public order model than about the riots, “as if the problem were the police.”

In this sense, he recalled that there are some parties -in reference to the CUP- that ask for the dissolution of the anti-riot unit (Brimo), before which he has warned that if this measure were agreed they could not guarantee that an intruder could enter the Parlament or in the Palau de la Generalitat, because there would be a greater “lack of protection”.

In the same vein, the Professional Association of Commands of the Police of Catalonia (COPCAT) has spread a very critical message on the networks to denounce his feeling of helplessness towards politicians, simulating an advertisement on a sales website in which they are looking for “professional politicians to be adopted”, with one condition: “clowns and irresponsible, abstain”.

For his part, the Minister of the Interior met this Friday, in a meeting scheduled in advance, with representatives of the Iridia collective and Amnesty International, with whom he regularly meets.

Half a million in damages

The Barcelona City Council estimates that more than half a million euros the cost of the damage caused in public space in the three nights of riots this week in the city, 315,000 of them due to the burning of hundreds of waste containers.

Of the 59 arrested in the riots in Catalonia, so far only one has entered preventive detention, while the duty judges of Lleida, Barcelona and Tarragona released 18 of the last arrested on Friday.

Some 300 people, most of them university students, have demonstrated this afternoon in Barcelona to demand Hasel’s freedom and against what they have described as “the repressive rage against freedom of expression.”