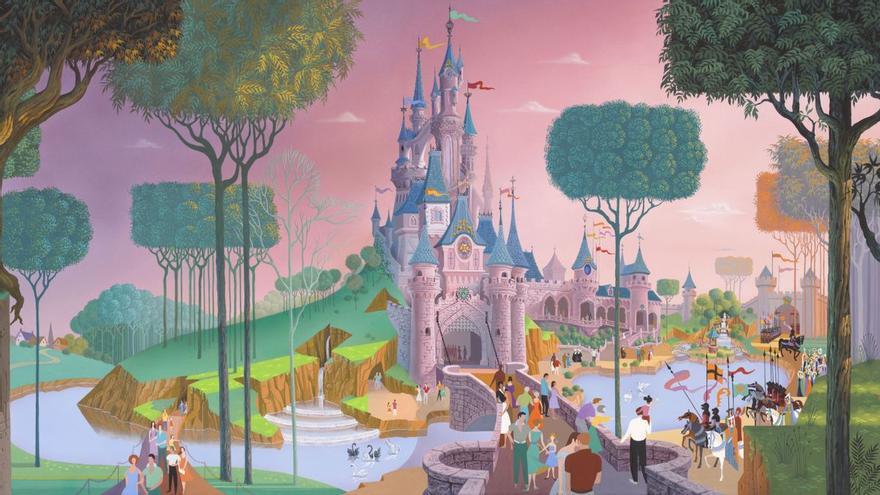 “It’s Disney but is it art?” The question that can be read these days on one of the walls of the Metropolitan Museum in New York is not new. It appeared in one way or another in headlines and articles in ‘The New York Times’ back in 1939 and 1940, shortly after the premiere of ‘Fantasia’ and the art gallery added one of the images from ‘Snow White and the Snow Whites’ to its collection. seven dwarfs’, the animation studio’s first feature, specifically a celluloid gouache with the image of two vultures awaiting the end of the evil queen.

As the New York newspaper wrote at the time, with that donation Walt Disney joined “the immortals.” And although since then the question about whether creation is art remains unresolved for some, and the iconic and at the same time amorphous figure of Disney flows between definitions of artist, entrepreneur and ‘entertainer’, there are no doubts for the Metropolitan. Long after MoMA in the 1930s and the Whitney in the 1980s dedicated exhibits to Mickey Mouse’s father, for the first time in its history the Met has decided with its own sample: ‘Inspiring Walt Disney: the animation of the French decorative arts’, open in the encyclopedic temple of art until March 6.

The exhibition puts the spotlight on Disney’s personal fascination with France and with French culture, which fu for the first time to Paris in 1918 when he was just 17 years old to drive an ambulance after the First World War and he returned with his family in 1935, bringing back to Los Angeles 300 illustrated books that would become, before the internet, the library and documentary archive of the studio he founded with his brother Roy in 1923.

First of all, however, the exhibition explores how the artists of the animation studio had in the art of the eighteenth century a source of influence and inspiration, putting 60 pieces from the Met (and borrowed) in a dynamic dialogue with 150 from the studio. And it is clear how the Disney artists have drunk from the French rococo, that movement that responded to the baroque with ornamentation, a pastel palette, dynamic asymmetry, a sense of movement and irony and joy; how they were also imbued with medieval art and the early style of the Netherlands for ‘Sleeping Beauty’ or Gothic Revival architecture for ‘Cinderella’.

Also Read  Fanta Bility: 3 police officers accused of the shooting death of an 8-year-old girl in the US

In the exhibition they appear together with images and cells from films or shorts from 1931 and 1934 that were the first to animate objects the delicate porcelains from Sèvres and Meissen, the clocks by André-Charles Boulle, chandeliers, furniture…

And it is learned. The clothes that were designed for ‘Beauty and the Beast’, for example, did not follow the models of the time not only because they were too complicated to animate (something that computer techniques would now allow) but because Disney executives thought that the public would not identify with wigs and lace and too effeminate a style.

And it wasn’t just Disney a pink enhancer. Color was exceptionally popular in the Rococo, driven by Madame de Pompadour, lover of Louis XV and patron saint of the arts. And centuries ago Jean-Baptiste Marie Pierre, the king’s main painter, expressed his frustration with artists who returned from training in Italy “with color and vigor, which they lose little by little, driven by the need to satisfy a nation that wants everything pink”.

“It is not a promotional exercise,” says Wolf Burchard, its curator, about the exhibition in a telephone interview. He had the idea for the show five years ago when he was in the UK. He realized that the books and exhibits made up to then by Disney were done by film historians and not art historians, and thought “that the material would benefit from being viewed from that art historical perspective”. He initially proposed it to the Wallace Collection in London (which collaborates in the organization and will host the exhibition from April to October) and then, when it arrived at the Met, he ended up proposing and mounting it in New York.

The curator also emphasizes that “it is not an exhibition about Walt Disney the company and not even about the man, but about the artists” that the studio used. And the truth is that at the Met you can see, for example, the work of Mary Blair, the woman who was the driving force behind the visual style of ‘Cinderella’; that of Eyvind Earle, the stylist of ‘Sleeping Beauty’ who emulated the style of Jan van Eyck or the cinematographic scale of the tapestries; Glen Keane’s, fundamental to the image of ‘Beauty and the Beast’, three of the fundamental films in the exhibition itinerary.

There are more proper names without which Disney would not be Disney: Bianca Majolie, Mel Shaw, Kay Nielsen… And precisely the large number of artists who worked in animation creates another parallel with these European decorative arts. Separated by two centuries, the artists, craftsmen and entertainers shared an ambition: to breathe life, personality and charm into the inanimate, but beyond the visual, both functioned with similar practices.

“At the beginning of the 18th century in Europe, in the great French and German porcelain workshops, hierarchies were created and developed, talent was identified… And the same thing happens with hand-drawn animation”, explains Burchard, who also finds in this operation an argument to challenge those who question the appropriateness of Disney being at the Met now. “We would not necessarily call from our point of view of 2022 artists the people who made that other art that is exhibited in the exhibition, the porcelain, the furniture… We would call them artisans, potters, furniture makers… In the end, it does not matter ; what they produced are powerful and inspiring works of art.”

There are many who agree with Burchard and the Met. In articles about the exhibition qualifiers such as “fascinating” and “magnificent” have been read. On a recent morning, visitors of all ages walked by, stopping and carefully looking at pieces that might not otherwise have taken their time in a visit to the vast museum.

There have also been negative reviews. In ‘The New York Times’ Max Lakin has considered “whether a great institution dedicating programming to a multi-million dollar corporate giant is what best serves the public”. And even harsher has been in ‘The Wall Street Journal’ Eric Gibson, who believes that the exhibition “indicates the problematic new direction that the museum has taken”, that with the exhibition, in his opinion, “breaks with its illustrious past and puts him on the path to an unworthy future.” “It’s another example of postmodernism’s project to eradicate all hierarchies, distinctions, and parameters by establishing false equivalences between opposites,” he writes.