Novak Djokovic has lost. The world number 1 will not be able to start defending this Monday the title he won last year in Melbourne, ninth in his collection of Australian Grand Slams, and you will not be able to re-enter Australia for the next three years. The three judges of Australian High Court, chaired by James Allsop, unanimously decreed the expulsion from the country and without possible appeal.

For almost four hours, Nick Wood, head of Djokovic’s legal team, tried to prevent the deportation of the Serbian tennis player after the Australian government’s Immigration Ministry denied him a second visa, considering that his presence in Australian territory represented a public health hazard and the order by contradicting the regulations decreed against covid-19 in the country.

The 268-page file, in which Djokovic submitted affidavits in which he accepted the errors made on his first visa, upon arrival in Melbourne on January 5 and skip your trip to Marbella last December 30It was not even taken into account. At 10:50 p.m. on Sunday night in Australia, Djokovic took a plane to Dubai, appearing “hugely disappointed”. The world number 1 will now take “a little time to rest and recover before making any further comments on the situation”.

After 11 days of a soap opera that has had half the world in suspense, Djokovic leaves Australia with an off-court defeat and with the insecurity of an uncertain future in sports against his refusal to be vaccinated.

The expulsion of Djokovic leaves the tournament headless without the world number 1, something that has not happened in any Grand Slam for 13 years, and opens the expectations of his greatest rivals for the title.

The replacement of the Serbian tennis player by the Italian Salvatore Caruso (150th in the world) leaves the upper part of the table unbalanced in which the tennis players The most benefited will be the German Alexander Zverev (3) and Rafael Nadal (6), one of which should theoretically cross the champion in the semifinals. Without Djokovic on court Daniil Medvedev (2) will be the big favorite for the title that eluded him last year in the final against the Serb.

The season gets tough

The problems do not end with deportation in Australia. The 2022 season is very complicated for the Serbian tennis player who You also do not meet any requirements to currently enter the United States and Canada., where in March he was going to play the Masters 1,000 in Indian Wells and Miami, as well as the Masters 1,000 in Canada, Cincinnatti and the US Open next summer.

Djokovic’s tennis calendar will also be reduced in the rest of the circuit. If you want to play in Wimbledon must pass before 10 day quarantine in Great Britain. Roland Garros is also studying how it will allow unvaccinated tennis players to enter, although initially, if Emmanuel Macron does not say otherwise, the Serbian tennis player will be able to defend his title in Paris and play the 1,000 clay Masters in Monte Carlo, Madrid and Rome, although In Italy, he will have to be subject to strict restrictions, leaving the hotel only to train or play.

to their 34 years, the still world number 1 will have a harder time achieving the records for which he says he continues to play. for now misses the chance to win the 21st Grand Slam of his career and run danger of losing world number 1 where it will have been installed this Monday for 351 weeks and was chasing Steffi Graf’s absolute record with 377.

Daniil Medvedev could take the number 1 spot from him if he reaches the final in Australia (1,200 points) or wins the title (2,000 points). Djokovic currently leads the ranking with 11,015 points, ahead of the Russian tennis player, with 8,935 points.

Serbia is outraged by the treatment

Aleksandar Vucic, president of Serbia, considers the expulsion of his compatriot a purely political decision and complained this Sunday of “a Witch hunt” and a mistreatment against a person and a country“. The Serbian prime minister spoke personally with Djokovic to convey his support: “I told him that I can’t wait for him to come to Serbia.” 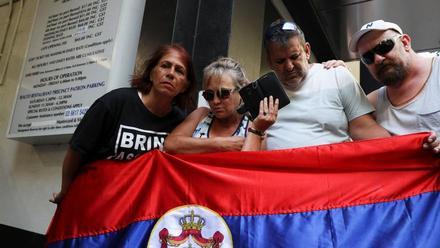 In contrast, the Australian Prime Minister, Scott Morrison, expressed satisfaction with the court ruling by justifying that the decision responds to the “public interest, for health reasons” of the Australian government, which since the beginning of the pandemic has applied one of the toughest policies in the world against covid-19 and the fight for the rebound in infections in recent months.

The ATP avoids the conflict and speaks of the “end of a series of deeply regrettable events”, but values ​​that “the decisions of the judicial authorities in matters of public health must be respected” and asks for time to “draw lessons” from this case.