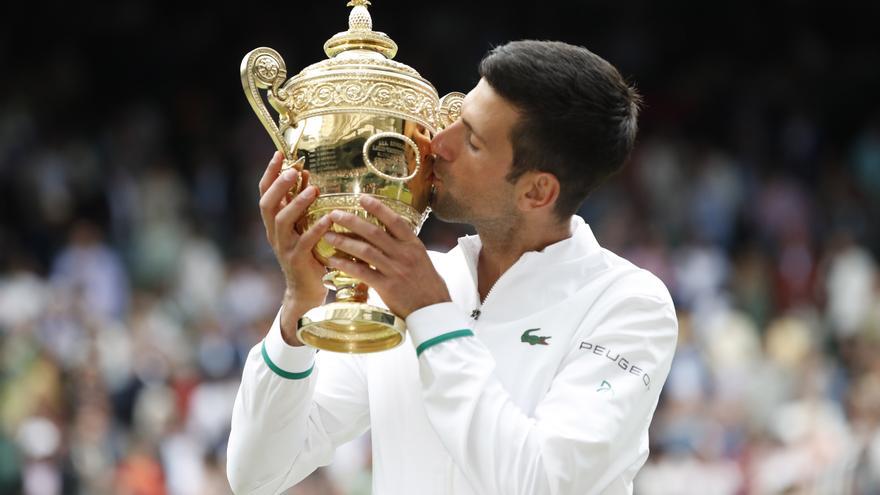 Few doubted that this Sunday was the day that Novak Djokovic would match the legends of Roger Federer Y Rafael Nadal and if there was any uncertainty, the Serbian, with all the arguments already in favor of being the best in history, disarmed the brave and fighter Matteo Berrettini (6-7 (4), 6-4, 6-4 and 6-3) and added his sixth Wimbledon, raising his Grand Slams mark to twenty.

It was the day for the Belgrade, the number one in the world, to take another step in its bite into history. The day to equalize the records of Federer and Nadal, to be the first man since Rod Laver in 1969 to win the first three Grand Slam of the year, to be the fifth of the Open Era, and the first since Nadal in 2010, to make the Channel Slam, that is, the double Roland Garros and Wimbledon, to stay just one title away from equaling the seven of Pete Sampras and William Renshaw .

It was the day for Djokovic will show that he is ready to assume the title. In front, an inexperienced Matteo Berrettini in this scenario, in this kind of finals, but ready to fight, to show pride. The first Italian to reach a final here, the first Italian to lose it. No one would have bet on his triumph in a square where Djokovic has only delivered one of the seven finals he has played, against Andy Murray in 2013, the day of British redemption, but he put up a good fight and flirted with surprise.

It took the Serbian three games to acclimatize. As soon as Berrettini opened the door of opportunities and stopped scoring first, Djokovic ate ​​the track. The first ‘break’ was fatal for an Italian whose options were to play the perfect match and pray.

He had some hesitant beginnings, in which each time the point lengthened, his options were getting smaller and that he won a trade was little more than a miracle. It was not so much the result of his nerves, but of the superiority of the one who knows best. Nineteen Grand Slams on one side, zero on the other. The pressure was insurmountable.

It took Berrettini to save a set point and a ten-minute game to figure out where he was. He neutralized the Serbian advantage and fought a key set to the end. Hence the importance of a ‘tie break’ that Berrettini sealed with an ‘ace’. Djokovic had a 6-2 ball and was suddenly set down.

He reacted, he had no other choice. He took the second set 6-4, but after giving up his serve again when he was able to close it 6-2. Berrettini was a limpet on the track, a man who had faith, who believed he could give the big surprise. With swords raised high, the Italian began to give in to the opportunity of his life.

In the third set, the one that would define the match, Djokovic took advantage again. He got 3-2 and served and that’s where Berrettini’s last options went. Two deadly break balls, one of them stopped at the net in an easy a priori passing, put him on the verge of losing it. As much as the fans were in his favor and a poster of “It’s Coming Rome” appeared in one of the funds, an omen of such an important day that it was for Italy.

But Djokovic already had it. In very few parallel universes this escaped him. The one from Rome did not lose face. He watched the third set go and held Djokovic at bay until the seventh game of the fourth. When the pressure is maximum, it is impossible to bring down the Serbian. He sped up just enough to break, take the last four games and reign in London for the sixth time.

Djokovic is already man with 328 weeks as number one, more than anyone in history, the only one to have won all four Grand Slams in the Open Era at least twice, the only one who has the nine Masters 1,000 and the one who has more of them (36), along with Nadal.

He is two tournaments, the Olympics and the upcoming US Open, from being the first man in history to achieve the Golden Grand Slam, matching Steffi Graf’s legendary 1988. Even if he only succeeded in New York and not in Tokyo, he would succeed Laver as the first tennis player to win all four Grand Slam in the same year.

Your arguments like the best in history are almost immovable, but their thirst does not cease.