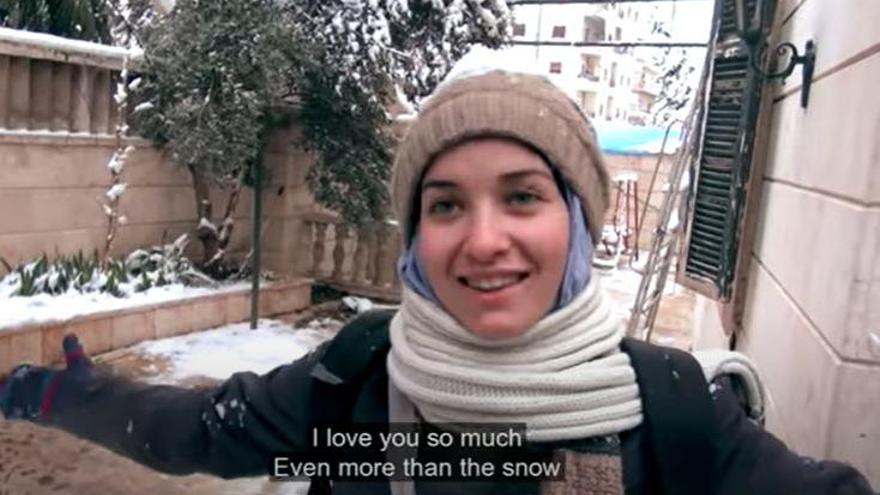 Some of the best documentaries of the year monopolize the billboard of the weekend: ‘For Sama‘, a vision of the Syrian war nominated for Oscar, a surprising movie by Luis López Carrasco on the industrial reconversion of the 90s in Murcia and ‘Words for an end of the world’, with historical revelations about the figure of Unamuno.

To degrease, Spanish comedies like ‘Stay away from me’, inspired by the quarantine ‘covid’ and ‘Not a joke’, on couples therapy, along with international premieres such as ‘The year we stopped playing’, by the German Caroline Link, or ‘La Llorona’ by the Guatemalan Jayro Bustamante.

Oscar nominee, ‘For Sama’, the war in the first person

A string of recognitions -Award in Cannes, a BAFTA, a nomination – endorse this documentary that narrates the epic and intimate journey of a woman in the middle of the Syrian war in the form of a love letter to her daughter.

Co-directed by Waad Al Kateab y Edward Watts, the film narrates the life of the first throughout five years of war in Aleppo, five years during which she falls in love, marries and gives birth to Sama. Stories of loss, laughter and survival as Waad decides whether or not to flee the city to protect his daughter’s life.

‘The year of discovery’, the recent history of Spain

The director from ‘The future’, the Murcian Luis Lopez Carrasco has excited critics with his second feature film, a documentary that starts from a little-known fact: the year 1992 is remembered for two events that exported the image of a developed and modern Spain, the Olympic Games and the Seville ExpoBut that same year, in Murcia, a workers’ revolt set the regional Parliament on fire.

The film is a 200-minute diptych with testimonies that revolve around that historical episode, the climax of a traumatic process of industrial reconversion that defined the economic model of today’s Spain.

Finding about Unamuno in ‘Words for an end of the world

The official story tells that the Spanish writer and philosopher Miguel de Unamuno died suddenly at home on December 31, 1936, but this documentary by Manuel Menchón questions that story and reveals manipulations that sow doubt about a possible murder.

The film, presented at the last Seminci in Valladolid, is the result of years of research and has had the collaboration of Unamuno’s heirs and dozens of experts, and also reveals the maneuvers of the Nazi government to avoid being awarded the Nobel.

The Colombian Fernando Ayllon directs this comedy about four marriages in crisis that decide to attend couples therapy in the Caribbean to try to save their relationship. There they will meet love gurus whose unorthodox methods will turn their worlds upside down.

Nathalie Seseña and Goyo Jiménez lead the cast. Ayllón has an extensive career in the genre with films like “He wasn’t dead, he was on a party”, “He who falls in love loses” or “Ugly but tasty”.

“Welcome to the new abnormality” Pray the poster of the new movie Norberto Ramos de Val, a comedy inspired by the confinement derived from the current health crisis caused by covid-19 that invites us to reflect and connect with laughter through situations experienced in quarantine.

A young writer decides to work as a guard at the Hotel Balneario de Ariño (Aragon), a mining area where his novel is set and where he plans to finish his book, until the pandemic and quarantine erupt in the world.

‘The year we stopped playing

Based on Judith Kerr’s ‘bestseller’ ‘When Hitler stole the pink rabbit’, this film directed by the German Caroline Link chronicles the escape of a Jewish family from Nazi Germany in 1933 from the perspective of a 9-year-old girl.

It was seen by more than a million viewers in Germany. Link, winner of an Oscar for Best Foreign Language Film for ‘In a place in Africa’ (2001), it features the interpretations of the newcomer Riva Krymalowski in the role of the young Anna, along with Marinus Hohmann, Oliver Masucci and Carla Juri.

Jayro Bustamante examines the history of Guatemala in ‘The weeping woman

Jayro Busdamente combines suspense and magical realism in his portrayal of the well-known Hispanic legend that talks about crimes of the armed conflict in Guatemala (1960-1996), the impunity of those responsible and the racism present in the country.

Busdamente has been one of the cinematographic revelations of this year in which he has also released another film, “Tremors”, in which he addressed the taboo of homosexuality in Guatemala.

‘Under the silence’, ETA from another point of view

A young journalist travels to the Basque Country to approach those responsible for the murders of the terrorist group ETA and its ideological accomplices. During his trip, he meets with repentant terrorists, with those responsible for crimes currently integrated in their towns, with those convicted of terrorism occupying positions of mayors, parliamentarians or university professors.

‘Do you know Tomás?

The actor Leonardo Ortizgris He hardly knew anything about autism when the director María Torres told him about shooting ‘Do you know Tomás?’, a film that immerses himself in this personality disorder.

His character in the film is called Leo and he promises his girlfriend Fer that he will be more responsible and take care of his brother Tomás while she performs surgery. But Leo and his friend Chris break the promise and decide to take Tomás to the wedding of a famous producer where they will play together with his eccentric choristers and discover how special Tomás is.

‘The fixies against the crabots

From Russia comes this animated film that through tiny beings show children the importance of companionship and encourages the use of intelligence before force.

Rebeca, Professor Eugenio’s girlfriend at university, has discovered that he won an award thanks to some secret little assistants, the Fixies, and threatens to reveal the existence of beings to the world. But first he challenges Eugenio so that the world finally knows who the best inventor really is.