The Dodgers manager had never been to the Negro Leagues Baseball Museum before, not in his 10-year career as a player or his years as a coach or front office member. But as Kendrick, the president of the museum, mused and regaled some of the Dodgers’ players and coaches with tales of Bud Fowler, Cool Papa Bell, Jackie Robinson, Roy Campanella and Henry Aaron in an hourlong tour, one image caused Roberts to perk up.

Roberts is the first minority manager in the Dodgers’ history; his father is Black, and his mother is of Japanese descent. It’s a role that Roberts, by his own assessment, has settled into since assuming the post in 2016. As the Dodgers made their first visit to Kansas City to play the Royals since 2014, celebrating the 75th anniversary of Robinson’s debut breaking the color barrier, it resonated. Particularly as Kendrick turned a corner and pointed out a photograph.

It demonstrated the 50-year-old manager’s biracial heritage: an image of a 1927 goodwill tour of a selection of Negro League players called the Royal Giants, who arrived in Japan.

“(They) kind of helped them move the game forward,” Roberts said. “I didn’t know that.

Years before the Babe Ruth and Lou Gehrig barnstorming tour took them overseas, Black baseball was making its presence known.

“As we look at our game today,” Kendrick said to a crowd of Dodger players, “there are so many ethnicities that make up a major-league roster on any given day. At the heart of it were the Negro Leagues. They helped make the game the global game it is today.”

Kendrick told the stories of players like Raleigh “Biz” Mackey, the man who taught Campanella how to catch at age 15 — years before he’d reel off three MVP awards playing alongside Robinson for the Dodgers. He spoke of the women in the game, the likes of Connie Morgan, Mamie Johnson and Toni Stone, who broke the gender barrier in the Negro Leagues.

“They dared to dream of playing baseball,” Kendrick said. “They had no idea that they were making history.”

And he told the stories of those kept out, like Buck O’Neil, whose induction into the National Baseball Hall of Fame came just last month. O’Neil’s plaque were put on display in the home and visiting clubhouses at Kauffman Stadium on Saturday for the Royals’ annual Salute to the Negro Leagues. Kansas City donned Monarchs uniforms celebrating their Negro League heritage, while the Dodgers wore throwbacks honoring the Brooklyn club Robinson made history with in 1947.

The Dodgers at the Negro Leagues Baseball Museum. pic.twitter.com/kVVhBAIPgm

As he spoke, the group of Dodgers that included players such as Clayton Kershaw, Trayce Thompson, Alex Vesia, Yency Almonte, Hanser Alberto and Tyler Anderson reflected upon the history they were experiencing. Kershaw walked over and glanced at the tombstone of Satchel Paige. Almonte posed alongside a life-size statue of Paige in the museum’s “Field of Legends.” Alberto squatted behind the statue of Hall of Fame catcher Josh Gibson and pretended to be an umpire as his teammates snapped photos.

Evan Phillips was in awe during his first visit. Years ago, while Phillips was in spring training in the Orioles organization, Kendrick came and made a presentation similar to the one he gave on his personal tour Saturday. But this was different.

“To get that full experience… that was really cool,” Phillips said.

And as Kendrick spoke of Paige, reeling off the nicknames Paige gave his pitches, he asked Dodgers left-hander David Price if he had similar monikers for his repertoire. Price is a member of the “Black Aces,” one of 15 Black pitchers to win 20 games in a season in the major leagues.

“To be a part of that group,” Price said, “that’s something that I’ll always have, and it’s very special.”

Saturday marked Price’s 10th trip to the museum, dating back to his days as a star at Vanderbilt and continuing with trips with his teams in the American League. 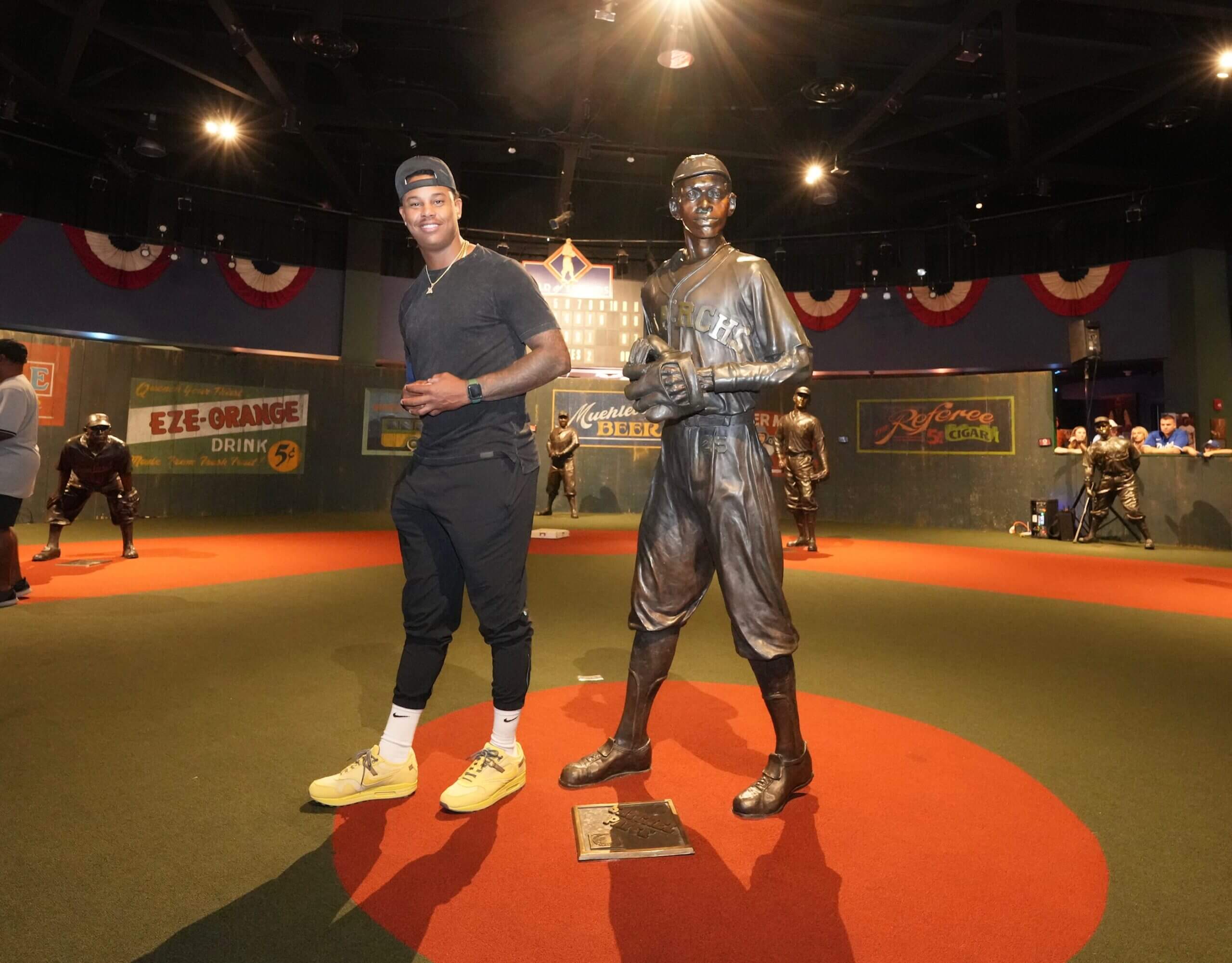 Roberts marveled as Kendrick talked about the likes of Hall of Famers — such as Aaron, Campanella and Willie Mays — who got their starts in the Negro Leagues over its 40-year history.

“It is mind-blowing to put it in perspective as far as recency and just thinking that those guys had opportunities in the middle of their careers… there were so many players of that caliber that didn’t have the opportunity to play in the major leagues,” Roberts said. “To see a picture of a 17-year-old Hank Aaron, with a ham sandwich and two pairs of clothes to change in and $1.50 in his bag from him, it’s crazy. It’s a history lesson that we all needed.”

Said Price: “That’s why we go, so we can expand our minds and just learn a little bit about the past of what the Negro League guys went through.”

And for some, it was extra personal.

When the group weaved through some exhibits of the early years of the league, Kirsten Watson, the club’s sideline reporter for SportsNet LA, began searching. Ella’s face lit up as she spotted it: her great-grandfather, Frank Miller, smiling as part of a team portrait for the Cuban Giants in 1888. 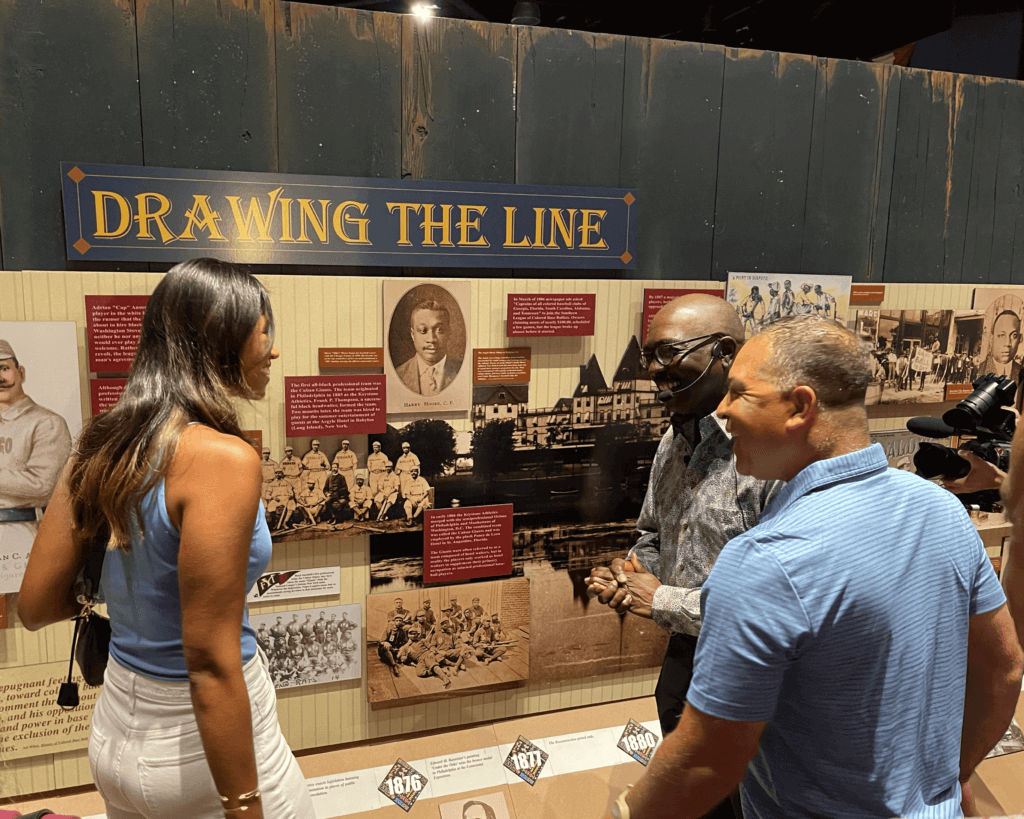 Kirsten Watson points out a photo of her great-grandfather to Dave Roberts and Bob Kendrick. (Fabian Ardaya / The Athletic)

She called Roberts over and pointed her great-grandfather out, and Roberts smiled.

“Come on,” Roberts said in disbelief. “Are you serious? No way. That is unreal.”

“Isn’t that amazing?” Watson said, and even Kendrick was speechless.