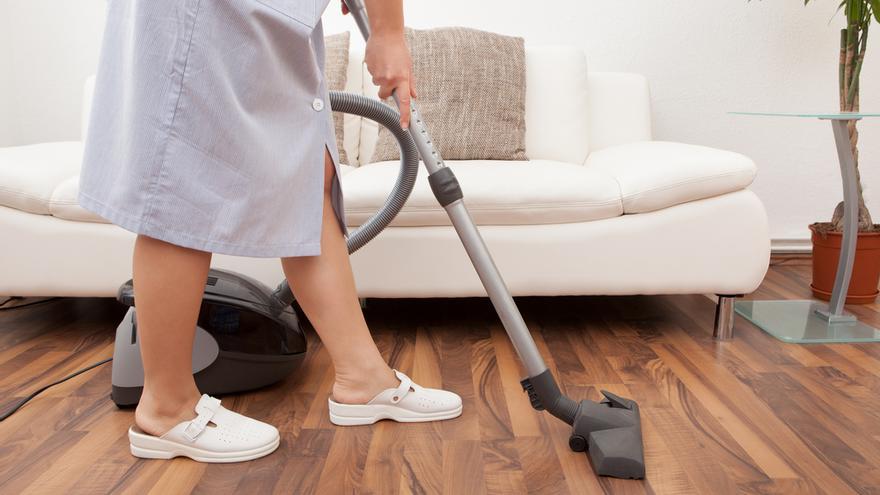 Ten years after the approval of the special system for domestic workers, this group, women and foreigners to a large extent, still do not have the same rights that the rest of workers in Spain, fundamentally the one to collect unemployment, a gap that could end up closing from Europe.

In Spain there was in September of this year, the latest data available, 380,102 people affiliated with the special system of domestic employees, located within the general Social Security regime and created at the end of 2011 -although it came into full force in 2012- as a kind of “transit” to equalize all the rights of a group marked by submerged employment.

Ten years later, cleaning or care work paid by the hour “in the black” continues to have a relevant weight as reflected in the data from the Labor Force Survey (EPA), which counts 584,700 people who claim to do domestic work, that is, at least two out of three are not registered.

“They are a group without visibility,” the labor lawyer Javier de Cominges, from the Vento office, complains to Efe, who has brought before the European justice the claim of a domestic employee who was denied her request to contribute by the General Treasury of the Social Security to receive unemployment.

Her employer, explains Cominges, was willing to pay the contribution that the worker requested, but the Treasury rejected it because the special system for domestic employees does not include unemployment protection.

A CJEU ruling may entitle 400,000 female employees to unemployment

This rejection has led the General Counsel of the Court of Justice of the European Union (CJEU) to consider that Spain contravenes Community regulations by excluding these workers from unemployment benefit.

View of the entrance of the Court of Justice of the European Union in Luxembourg. EFE

“The rule in which it relies may be neutral but it indirectly discriminates against a group as the majority are women,” explains Vento’s lawyer, who recalls that seven out of ten times, the CJEU fails in the same way that the lawyer does. general.

“Before the end of the year we can have a binding sentence for Spain”, adds De Cominges, which would force to give the right to the collection of unemployment to these nearly 400,000 employees after a decade in which the different governments have been postponing their recognition, which for now is postponed until 2023.

For the person in charge of the Migrations area of ​​UGT, Ana María Corral, a social dialogue table is necessary that “will necessarily be complex” to address changes in both the employment relationship and Social Security.

The affiliates in this special system still do not contribute for unemployment, neither for the Fogasa (wage guarantee fund) nor for professional training, so they do not have the right to benefit from these contingencies either.

The provision for unemployment remains the main stumbling block so that Spain can sign Convention 189 of the International Labor Organization (ILO) on domestic employment, which has already been ratified by 30 countries such as Germany, Italy or Portugal and which is a demand from trade unions and sectoral associations.

The Minister of Labor, Yolanda Diaz, has been willing to work in this line, as stressed when the decision of the EU General Counsel was known: “That domestic workers do not have the right to unemployment takes us away from the Constitution, Europe and Convention 189 of That is why we continue to push for its ratification and working to put an end to this discrimination as soon as possible. ”

Extraordinary help in a pandemic for 45,000 workers

One of the clearest evidence of this lack of protection was seen during home confinement by the pandemic, when the Government had to approve an extraordinary unemployment benefit for domestic workers and that finally, according to the figures provided to Efe by the Ministry of Labor, they received 45,000 workers.

A Caritas report from the beginning of the year assured that 75% of the domestic employees could not even apply for this subsidy, Most of them because they are not contributing, but also because of the difficulties with the administrative procedures, which increase when you are a foreigner.

“Many women domestic workers have not been able to work during the period of confinement, which has pushed them into serious precarious situations, taking into account that the sector still does not have unemployment benefits that can provide them with eventual social protection in situations of hardship. cessation of activity or, as has happened with the pandemic, extraordinary circumstances, “lamented Caritas.