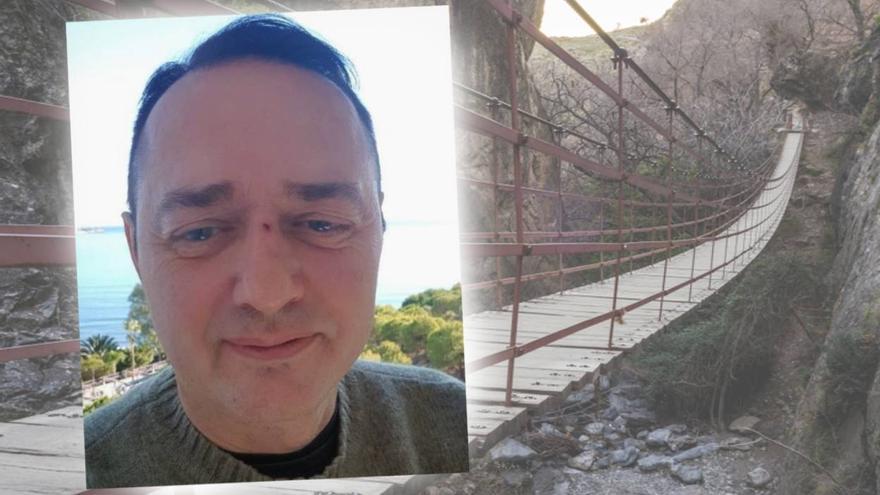 “Look for my body in Los Cahorros -an extensive Natural Park located in Monachil (Granada)- if you want to find me”. It was the last message he left for his wife. He did the same with his children, to whom he announced that he was going to commit suicide. After that, his cell phone was turned off. It hasn’t turned back on. Domingo Benítez, the 53-year-old man who disappeared on December 29 in Granada, He hasn’t contacted anyone again.

His family searches tirelessly for him, but there is no trace. The beats become endless, endless, “it’s like looking for a needle in a haystack,” they lament. They beat blindly, they do not start from any point. They dont have it. They don’t know because The Court of Granada has denied the request to access its geolocation. They have requested it, together with the National Police, on two occasions. Both have said no.

Domingo, with psychological problems and addiction – chronic alcoholism – becomes vulnerable. His disappearance, disturbing in police terms, hits a wall. The days pass and the search is blocked. A cry, that of the family, “knowing where he was for the last time would be key”, together with SOS Disappeared, asks that they let them search.

The extension of Los Cahorros is wide. The Natural Park surrounds the Sierra Nevada National Park, 86,208 hectares. Searching blindly is impossible. Geolocation is key. “If we have it, we have an approximate point where Domingo’s phone stopped working“, explains Joaquín Amills, president of the Association SOS Disappeared and voice of the family of Domingo Benítez. “From there you can set some beats, go marking a territory, and trace searches in a diameter of 4 or 5 km. If not, it is to be all with the tied hands”.

The court alleges that providing the data would be an attack on the freedom and privacy of Domingo. Call your case a voluntary disappearance. “He threatened to kill himself, what more do we need?” Amills laments.

In November the stability of Domingo diminished. It was a difficult month. His wife informed him of her intention to divorce. Legal proceedings began.

Sunday threatened to commit suicide three times in the last few days. In all of them he contacted his family to announce his plan. sent photos with three different scenarios in which he warned of his intentions: a hose connected to the car to breathe gas, a rope tied to a tree and a burning barbecue to set the house he was in on fire. Two alerts turned out to be false, the third did try. The Civil Guard, notified by his still wife, he saved Domingo’s life by appearing at the house. The fire had started.

After the messages, the last ones on December 29, the complaint for disappearance was filed and the National Police began the search. His phone, switched off since then, has no signal. His car, with which he left – a red Seat Ibiza with license plate 9957 DFR – does not appear. “It has been beaten by air, with the National Police helicopters, there has been Civil Protection, but it is looking for a needle in a haystack.”

“Yes it’s in psychiatric treatment, if you take medication, if you have an alcohol problem, which is chronic… If apart from the two times he threatened to take his own life, you have a third in which the Civil Guard intervenes. If the mobile has been turned off since December 29… What else is needed in this country for them to give you the geolocation? “, laments Joaquín Amills.

After the first raids, the National Police asked the Granada Court No. 4 to facilitate the geolocation of the mobile phone, “the Granada Court responded after a week or eight days saying no,” says Amills, who has already denounced in several times the problems that researchers face when they request this information through the courts.

“The family, their lawyer and the National Police they ask the court again for geolocation with the seriousness that is demonstrated. At the end of last week, when everyone was counting on it, the court and the prosecution say that not because it is a voluntary disappearance”. Domingo’s profile, his latest messages, speak for themselves. “We are talking about a disappearance of a vulnerable person.”

The protocol for the search for disappeared persons of the Ministry of the Interior establishes that involuntary disappearances include those who have mental health problems. Problems with cognitive impairment, mental disorders, neurodegenerative diseases, people with disabilities, etc. The search for the missing person is generated for reasons of their own safety or at the request of relatives or close associates, and for social interest.

Domingo, with medication, in shock, with depression and suicidal thoughts, contradicts the definition of voluntary disappearance. “That someone leaves their house on their own feet does not mean that the act is voluntary, their mental state means that decisions are not made freely, but in a conditioned way,” Amills emphasizes.

“When the police ask you for a geolocation, it is because there is evidence that that person is vulnerable”

The Granada Court bases its decision on the fact that there is no criminal evidence to access the contents of the telephone, so doing so could threaten the freedom and privacy of the disappeared person. Family, association and researchers clash. “When the police ask you for a geolocation it is because there is evidence that that person is vulnerable. The police have to have resources. The police are not going to look for a geolocation of a person who has simply left and possibly gone to a party weekend”.

The investigators do not advance, the investigation is entrenched. “We are making progress in protocol, in acting faster and faster and in training the police, but not in other key actions,” denounces Joaquín Amills.

Domingo’s is not an isolated case. Last October, SOS Disappeared presented a formal request to the Ministry of the Interior to expedite said process (time is key in many searches), establish an authorization protocol, and/or authorize investigators access – under police criteria. of the geolocation of their phones. The data is necessary to start searching.

Sunday, for a month, is not. “The logical thing is to think that he has committed suicide, but the sooner we find him, we are going to give the family that rest.” We must not forget, recalls the president of SOS Disappeared, that “what has to prevail is locating the person. We want to find her in good condition, find her alive, but if not, we have to find her even if she is deceased.”