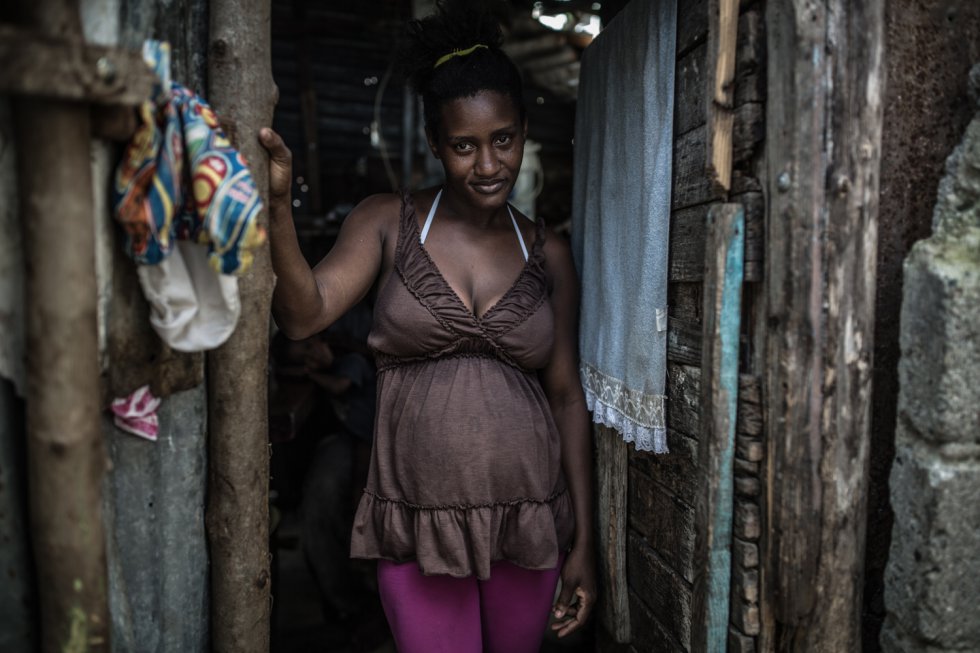 Yamileth, 14, is five months pregnant. He lives very close to his mother, Sugenys, in a humble little house in the Zurza, a marginalized neighborhood in the northern part of the city of Santo Domingo (Dominican Republic). Three large ravines, El Diablo, Los Dulceros and Las Tres Cruces, delimit this community with garbage and waste that, despite having made significant progress in its development from Strategic Plan of the National District 2030, suffers from proper urbanization, sanitation systems and management of basic services in most of the homes. Sugenys’s, like most, is built with very fragile materials: old zinc, tin and wood.

Inside, Yamileth answers her old-fashioned cell phone. At 16 weeks gestation, she has a hard time hiding her pregnancy. “Stop putting your mind on the cell phone and get into a rush and trapea your house a little before you arrive Mario”, His mother instructs him. In addition to the teenager, Sugenys has two boys.

“For me it is normal that he has become independent. I got married when I was 16 years old. In my house we were six brothers. There were many mouths to feed asín that my mother did not mind that she put me in love soon ”, says the mother naturally. Despite her young age, Yamileth has lived with Felix for a year. Plumber by profession, he has turned 50 years old. “He started visiting me at my mother’s house. He brought me gifts, clothes and one day he gave me a cell phone. This is how we got to know each other, until we became boyfriends ”, says the teenager.

Felix lost his job at the end of March last year, just before Santo Domingo went into quarantine in an attempt to prevent the spread of the new coronavirus. “Before we would go to the movies, eat pizza or go for a walk through the Zonal Colonial. There is no now na”Laments the teenager. The couple also live with Felix’s eight-year-old son, the fruit of a previous relationship. They have no steady income, so they survive on odd jobs. “You eat with what appears. There is no other, ”Yamileth resigned.

The ban is a milestone, but it is symbolic because it is limited to formal marriages registered in the Civil Registry

Alba Rodríguez, executive director of Save the Children Dominican Republic

The experts from Save the Children and Plan International consulted for this report affirm that the biggest gap in the country is that of inequality and poverty. “If we add the covid-19 crisis to that, we do not know what scenario we are in, but girls and adolescents who have been married or united with an adult suffer even more inequality,” says Alba Rodríguez, executive director of Save the Children in the country.

In the Dominican Republic, child marriage was not penalized until January 2021. It was of little use that the legislation classifies relationships with minors as sexual abuse when there is a difference of five years or more, according to article 396 of law 136-03. The previous legal framework actually legitimized child marriage, since adolescents over 15 years of age and adolescents over 16 could legally marry if they had the authorization of their parents. Below these ages, parental permission was necessary and, in addition, a judicial dispensation. In these cases, the judge did not take into account any age limit to approve these marriages. “It was about opening a more favorable path, it was necessary to deconstruct the sexist patterns that had accepted marriage with minors. This could only be done starting by prohibiting its practice ”, explains Rodríguez.

“Traditionally, motherhood was prioritized over any other advance, and that is deeply ingrained. It has been passed down from generation to generation, as an option for girls living in poverty ”, emphasizes Rodríguez. So, the country’s traditional gender patterns, in which girls were to marry early, must be transformed through education. “All actors have to be participants,” he stresses.

Traditionally, motherhood was prioritized over any other advance, and that is deeply ingrained

In January, President Luis Abinader enacted law 1-21 that prohibits child marriage in the country. In its first article, the law establishes that “its purpose is to prohibit persons under 18 years of age from marrying by modifying and repealing various provisions of the Civil Code”, and sanctions the practice with between five and one hundred minimum wages (of 1,500 to 30,000 euros), two to five years in prison and the annulment of the marriage. As part of this commitment, the Cabinet for Women, Adolescents and Girls has also been created, under the direction of the Ministry of Women. The measure is in line with the signing by the Dominican Republic of different agreements, such as the Children’s rights convention, ratified by the country in 1991.

“The ban is a milestone, but it is symbolic, because it is limited to formal marriages registered in the Civil Registry. There is still a gap in early (informal) unions, which are not regulated by law, ”says Rodríguez. “Teen pregnancy, child marriage and unions at an early age have a preponderant role in the agenda of priorities of our government management. There is a firm and determined political will to implement social, economic and educational plans and policies. We are fully aware that the sustainable development of the country will not be possible if the adolescent and young population faces structural barriers that limit their personal, educational and professional development ”, Mayra Jiménez, Minister of Women, responds by message. However, it does not mention unregistered marriages.

Aurelina Payano is an educator and works in a support program for married, united and at risk girls and adolescents in Save the Children. “The girls are between 12 and 17 years old. Most have been united [de manera informal]. There is only one married. First, she was united as a minor and ended up marrying the same partner when she was of legal age. They all share that they come from authoritarian and restrictive family environments, so many feel the need to escape from that reality, “he explains.

Nicole Luciano is also a worker for the NGO Save The Children and has daily contact with girls and adolescents in danger from this type of practice. “The work that has been done through talks and workshops on the prevention of child marriage has been very good. The biggest obstacle is that, sometimes, the parents do not cooperate ”.

The key for the future, these experts say, is to find a new masculinity in the behavior of children and adolescents and to continue a global work to look at others with empathy.