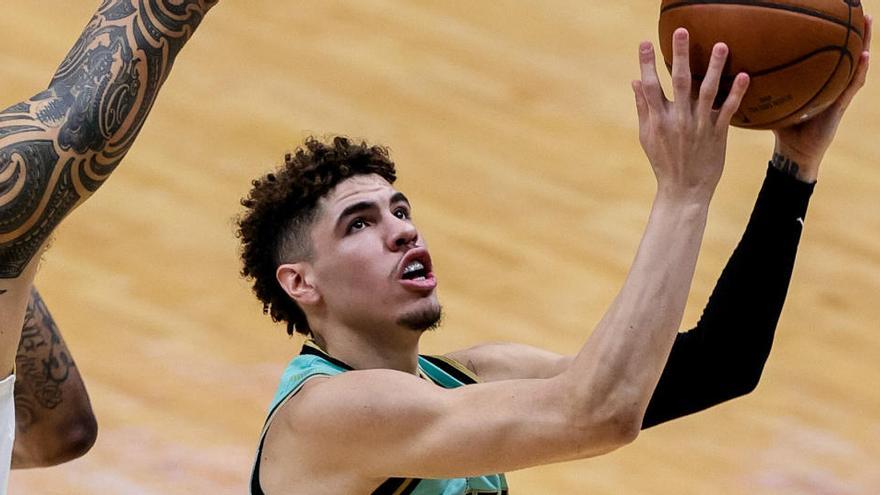 Young rookie LaMelo Ball He already has a professional brand to his credit, while the Slovenian point guard Luka Doncic achieved his second triple-double that left them as protagonists of an NBA day in which the casualties due to coronavirus also monopolized the news.

Ball, 19, contributedor 22 points, 12 rebounds and 11 assists, and surpassed point guard Markelle Fultz as the youngest player in NBA history to get a triple-double with which his team, the Charlotte Hornets, also beat the Atlanta Hawks 113-105.

The base, selected with the number three in the past college giveaway, surpassed Fultz (177 days younger).

Ball also became the fifth rookie in NBA history to record a triple-double and is the first Hornets player to reach that number off the bench.

Doncic, 21, contributed a triple-double of 20 points, 11 rebounds and 10 assists that helped the decimated Dallas Mavericks, with three casualties due to the coronavirus, beat the Orlando Magic 112-98 for the third straight win.

Dallas (5-4) reached a winning mark for the first time this season, despite having casualties from starters, forward Josh Richardson and power forward Dorian Finney-Smith, next to the reserve base Jalen Brunson, quarantined by the covid-19 protocols.

The Milwaukee Bucks showed that, as a team, despite having the loss of the star power forward, Greek Giannis Antetokounmpo (back spasms) can also win. Forward Khris Middleton contributed 27 points as the leading scorer that led them to 100-90 win over the Cleveland Cavaliers.

Middleton, an All-Star the last two seasons, continued his habit of scoring big numbers every time Antetokounmpo is out, and this time it served him well. his team could surpass the double-double (26 points and 22 rebounds) of center Andre Drummond, of the Cavaliers.

Guard-forward Gary Harris scored 21 points and led the Denver Nuggets’ balanced attack on the road 103-115 against the decimated Philadelphia Sixers, who played the game without four starters and with only seven players available.

Sixers coach Doc Rivers had asked the NBA not to play the game due to losses of four starters per injury problems and covid-19 cases.

However, the NBA refused Despite the constant increase in covid-19 cases that are occurring within the teams’ rosters, the league has only suspended the opening game of the season that the Houston Rockets and Oklahoma City were going to play at the Toyota Center due to the coronavirus from the Texas city.

Guard Tyler Herro contributed 31 points –best professional record – and nine rebounds for the Miami Heat to defeat the Washington Wizards on the road (124-128).

The team from the nation’s capital was one of those affected by the coronavirus pandemic as its top scorer, guard Bradley Beal, continues to be quarantined.

Who did play and led his team to victory was guard DeMar DeRozan, contributing 38 points as the best scorer for the San Antonio Spurs who won at home and after an overtime (122-125) to the Minnesota Timberwolves, who suffered the seventh defeat in a row.

The base DeJounte Murray achieved a double-double of 22 points and 14 rebounds and Australian point guard Patty Mills contributed another 21 points, including five triples and the basket that ensured the victory of the Spurs (5-4).

The guard CJ McCollum added 37 points as leader of the Portland Trail Blazers (5-4) that prevailed (99-125) to the Sacramento Kings and achieved the second consecutive victory.

With a triple midway through the third quarter, McCollum surpassed the exala-pivot Rasheed Wallace (9,119 points) andn tenth place on the Trail Blazers’ list of best scorers in history. The next to overcome will also be a tall man, the expivot Mychal Thompson (9,215 points).

The Suns tied with defending champion Los Angeles Lakers, the best mark in the Western Conference (7-3) and they achieved their first win at Indianapolis since 2016.

Despite the defeat, Lithuanian power forward Domantas Sabanis He was once again the figure of the Pacers by contributing a double-double of 28 points and 22 rebounds – he tied the best professional record.