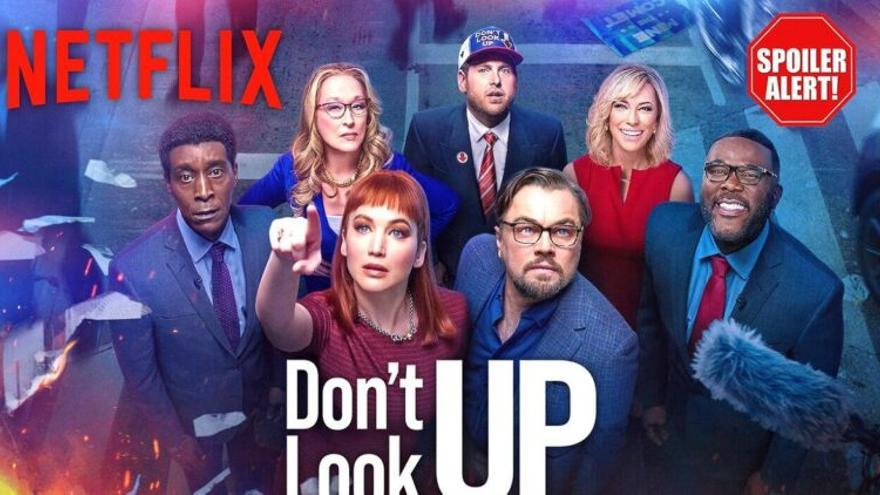 In the film “Don’t look up” From Adan McKay, scientist Kate Dibiasky (Jennifer Lawrence) discovers a comet on a collision course with Earth.

His boss, Professor Randall Mindy (Leonardo DiCaprio), checks that these calculations are accurate.

There are only six months left before the comet hits our planet, and the crash will produce a mass extinction like the one that wiped out the dinosaurs 65 million years ago.

It will be the end of the human species.

It may interest you: Is it possible that omicron is the last SARS-CoV-2 variant of concern?

An argument to weigh in on what we’re doing

In the movie “Don’t look up” it is clear that we could save ourselves, because humanity has the technological capacity to deflect the comet.

The only thing is that to achieve it the world would have to dedicate a huge global effort. And it’s easier to do nothing.

If we don’t look up we won’t see how the comet is approaching. And then we can continue as normal.

Janie Orlean (Meryl Streep), the president of the United States in the movie “Don’t Look Up,” clings to the slim chance that the comet won’t eventually hit Earth.

It may interest you: When do I stop spreading if I am positive in omicron?

A parody of our foolishness

For many, “Don’t look up” is a parody of our foolishness in the face of the threat of climate change.

But it also faithfully reflects our irresponsible attitude towards the coronavirus pandemic.

The objective reality is that after two years of the pandemic, in Europe we are at the peak of a wave that is breaking all records of infections and reaching levels never seen before.

However, as time goes by we feel more and more tired of Covid-19.

We have pandemic fatigue Y coronaphobia.

And fed up with no end in sight in the short term, we prefer to stop looking at the problem.

Relaxing to stop suffering is a good idea?

In the attempt to return to the old normality as soon as possible, we establish reductions in quarantine and isolation.

And now we plan to stop counting the number of total infected, limiting the statistics of the pandemic only those admitted to hospitals and ICUs.

The ultimate goal is to stop treating Covid-19 as a pandemic, instead considering it endemic.

It seeks to turn it into a relatively mild common disease, like the flu, which will be with us forever and with which there is no choice but to live.

But facing Covid-19 considering it to be endemic means that we are going to further relax measures that have been insufficient to control the disease.

It could work out fine.

But it could go disastrously wrong.

Do we want to make a “don’t look up” decision?

What we are doing with this strategy of relaxing the preventive measures of social distancing, massive tests, tracers, quarantines, use of FPP-2 masks and not vaccinating absolutely everyone, is allowing a large population of circulating viruses to remain where mutations will occur that will give rise to new variants.

Those who make this “don’t look up” decision, letting the evolution of SARS-CoV-2 itself decide the outcome of this pandemic, assume that the coronavirus will evolve into much less harmful forms than the current ones.

They believe that the new variants will be less and less harmful. But…

When and how will this pandemic end?

The pandemic will end when a new highly contagious variant appears but causes little damage, so that in a relatively short time Covid-19 becomes a simple cold (unfortunately this is not the case with omicron and its thousands of deaths).

But if we trust that the solution to the Covid-19 pandemic will come about because SARS-CoV-2 will become a barely harmful virus, we should be sure that there is a reasonable probability that it will turn out that way.

In essence, it is a problem of population genetics, the scientific discipline that allows us to understand how organisms evolve in the short term.

And, unfortunately, what population genetics predicts regarding the ability of SARS-CoV-2 to evolve is anything but reassuring.

Since the SARS-CoV-2 outbreak in Wuhan, new variants appear from time to time.

– Some turned out to be more damaging than previous variants.

– Others were more contagious, although less harmful.

Unfortunately, there is the possibility that a variant will appear that is much more infective and at the same time much more harmful than any that have appeared so far.

And not only is it possible, but the probability of it happening is not necessarily low.

The main problem when predicting what the new SARS-CoV-2 variants that appear in the future will be like is that they all originate from the accumulation of mutations that occur randomly during the replication of the coronavirus RNA within the cells. cells they infect.

It is a random problem.

In 1943, the doctor Salvador Luria and the physicist Max Delbrück published fluctuation analysis, a procedure that makes it possible to study whether the new mutations that appear in microorganisms occur by chance or occur as an adaptive response to selection pressure.

With this, they not only won the Nobel Prize, but part of the epistemologists of science consider that both carried out the best designed scientific experiment in the history of humanity.

Today Luria and Delbrück’s experiment (and others like it) was repeated tens of thousands of times in the most diverse organisms, from the simplest viruses to human cells, both normal and cancerous.

Thanks to this enormous effort, we know that each and every one of the mutations that occur in any organism on Earth, including SARS-CoV-2, occurs randomly.

What would seem logical to us, but it is not

Although Luria and Delbrück’s experiment is extremely complex, much of it can be understood intuitively.

And as we will see, the worst thing about it is that the result seems to go against what we think is logical.

To try to explain it in a simple way, let’s imagine that we treat pathogenic bacteria with an antibiotic, for example amoxicillin.

Similarly, we could think that SARS-CoV-2 is struggling to find a vaccine-escape mutant.

But although all this seems very logical to us, the reality is not like that.

Luria y Delbrück They showed that mutations occur in organisms and that they always happen randomly, due to random errors when their genetic material replicates.

The vast majority of these mutations never serve any purpose. But there are exceptions.

Imagine a population of bacteria that are replicating.

Approximately one in 100,000 bacteria will make a random error (mutation) when replicating their DNA.

It is a probability similar to that of a person winning the “jackpot” in the Christmas lottery.

Of all those bugs, most will be lethal to the virus itself. Others will be of no use to you, even if they are not lethal.

But a few might be of some use to you under certain circumstances.

By chance, a mutant could appear that is resistant to the antibiotic amoxicillin.

– It could appear at any time throughout the more than 3,000 million years that there were bacteria on Earth.

– It could appear even if amoxicillin did not exist, in which case it would have been useless at that time.

But if in the future we want to combat this bacterium with the antibiotic amoxicillin, that mutation will be very useful, even if it has achieved resistance through a totally random process. Luck question.

Of course, it could also be that the mutations that allow resistance to amoxicillin had never appeared.

Mutation is a process full of uncertainties.

This is why leading scientists of the 20th century said that “God plays dice.”

Chance has its rules.

The simplest game of chance, like tossing a coin in the air betting on whether it comes up heads or tails, generates great uncertainty about its outcome.

Probability theory tells us that if the coin is not rigged we can expect to win half the time.

But I couldn’t make sure we’d be right by betting on tails on the next toss.

Moreover, let’s imagine that to have a greater probability of winning we play with a rigged coin in which, for example, tails come up 10 times more than heads.

The probability of winning by betting on tails is 10 times higher, but in a single roll bet even an unsuspecting person betting heads against the rigged odds of such a rigged coin can win.

The chance linked to this process means that our forecast has a high degree of uncertainty.

But science allows us to trick the coin so that we have the best chance of winning.

And for this we have to try to produce as few mutations as possible in the SARS-CoV-2 population.

We have already written that during the replication of the RNA of the coronavirus, random errors are made that cause mutations at a rate of approximately 1 in 100,000.

And while most of these mutations are harmful or useless…

– Some of them could allow, for example, the virus to be resistant to an antiviral drug that has not yet been invented.

– It could also give rise to a vaccine escape mutant.

– Or produce a very infective strain but almost nothing harmful.

– Or a very infective and extremely harmful strain that initially shows no symptoms but after several days or weeks is often lethal.

The only sure thing is that if few viruses replicate, it is unlikely that new mutations will originate.

But if we let too many replicate, a huge number of mutations will appear.

The accumulation of several of them is what could lead to a strain with disastrous effects.

That is why any strategy that does not contemplate reducing the number of coronaviruses that are reproducing implies leaving it to chance that things turn out well or completely wrong.

Since these mutations may or may not appear at any time and anywhere in the world, we should not buy too many tickets for this insane lottery.