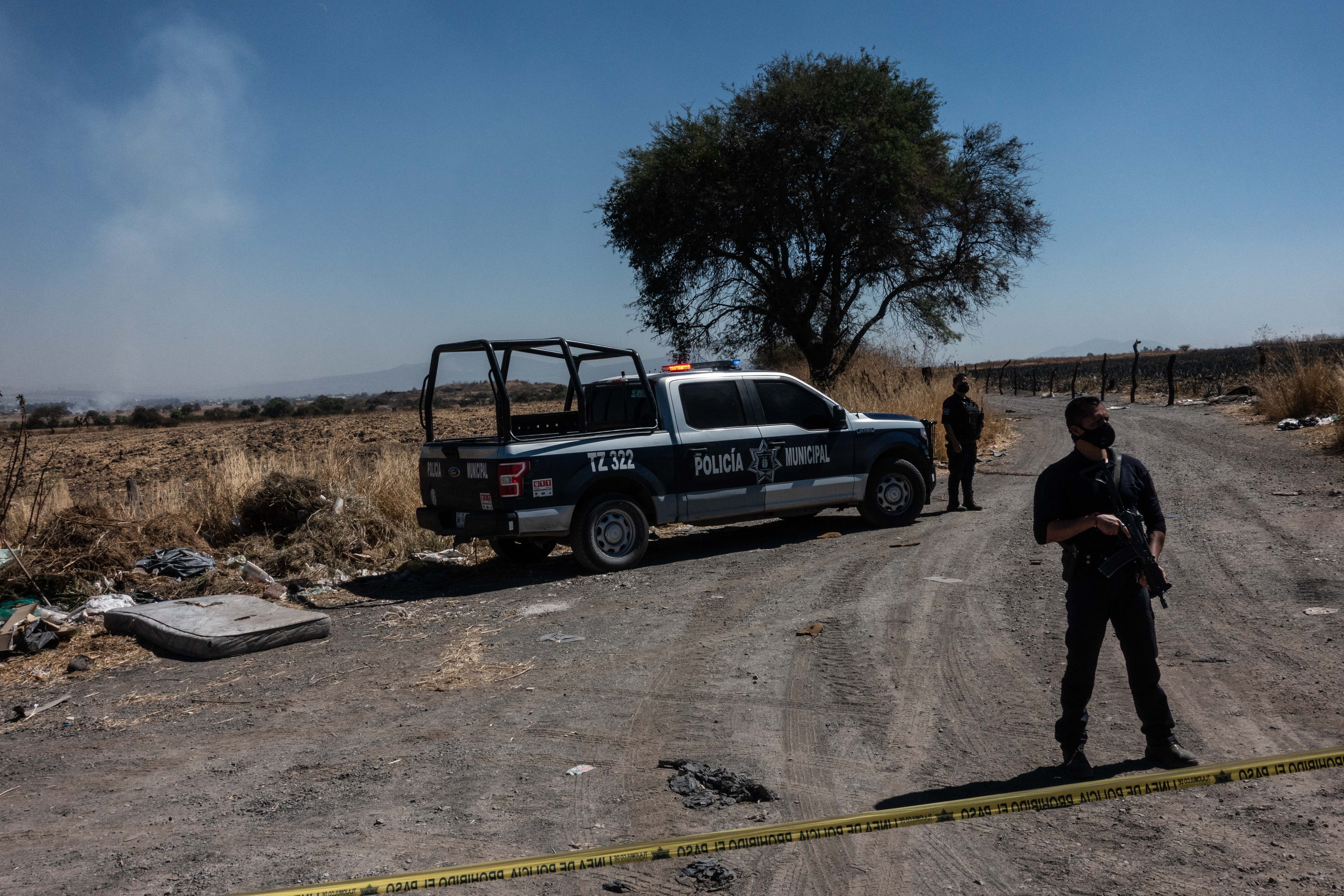 His hands were gray and huge the morning they found him. They were tied behind their back by a rope and half of their body covered by a garbage bag. His underwear and pants were exposed, almost the same color as his cuffs, dragged down to his knees. Nobody knew anything else about the dead. He was not the only one this Wednesday. Ten minutes later, at the other end of one of the most important capitals of the country, they found two others. Death and savagery are discovered early on in ditches and shoulders, on dirt roads and sometimes on the sidewalk. Daily, anonymous and unpunished crimes that shake viciously from the periphery to the exclusive areas of Guadalajara, Mexico’s cultural and tourist headquarters.

About three kilometers from where the first body was located, a group of men dressed in white and sky blue polo shirts were talking around a golf hole in the luxurious Las Cañadas residential area in Zapopan, within the metropolitan area of ​​the capital. A spotless golden retriever ran gracefully escaping from the cleaning lady of one of the huge houses built in front of the field of freshly cut grass. Pools, parks and even a shopping center, so that none of its residents leave this complex if they do not want to. If they do, they run the risk of finding a garbage bag with a tortured corpse, the executioners of which did not even bother to hide.

Guadalajara, like most of the country, has lived with these two realities for years. For a long time it was like this, trusting that death would stay in the poor neighborhoods, that it would not reach the well-paved sidewalks where thousands of people from Guadalajara circulate, while just a few minutes by car there is a war and thousands of disappeared are buried under the ground. . That the bullets do not reach the suburban.

It is the third most important city in the country, with five million inhabitants in its metropolitan area, after Mexico City and Monterrey (Nuevo León). It is the headquarters of the most important book fair in Spanish in the world – the Guadalajara Book Fair -, the main urban nucleus for the central and northwestern states of the country. And for a long time, a promising campaign was promoted by the Government to attract the most relevant technology companies in the world: the Mexican Silicon Valley, they called it.

Besides being the cradle of mariachi and tequila, it is also the land of the most powerful cartel in Mexico, that of Jalisco Nueva Generación. Whose leader, Nemesio Oseguera Cervantes, The Mencho, has become one of the most sought after by the DEA. From this point in the country, it has extended its tentacles to take control of organized crime in Mexico. And here he also has his own war open, against a split of his, now financed by the Sinaloa Cartel, called the Nueva Plaza Cartel, which keeps most of the municipalities surrounding the capital under siege: quartered, bagged and tortured appear every day from early in these areas.

Every now and then, the war that the marginalized endure bursts through the fragile territorial seams and reaches into the financial and political heart of the capital. Just a week ago, one of the horror scenes that one observes as an exaggeration in Hollywood movies or the worst years of the battle against drug trafficking, knocked on the door of one of the richest entertainment centers in the city.

At the entrance of a restaurant in Andares (Zapopan), an armed commando, which moved with the synchronicity of a military battalion, burst into one of its most traditional restaurants at the point of bullets from assault rifles. While a group entered the premises to allegedly take a man away, others fired from outside, as if the restaurant were just another military objective and not a family establishment that offers Mexican snacks.

The men in bulletproof vests withdrew after a monumental shooting, loading a dying man at the top of a truck pick up. And they fled. They deposited their mortally wounded partner at the door of a clinic where he died before they tried to save his life. And during the entire journey, almost 10 kilometers, plagued by surveillance cameras and police presence, no one blocked their path. There is not a single detainee. A scene of war that resulted in one death, two wounded waiters, a missing person – of which the Prosecutor’s Office has not provided any details – and more than a dozen armed men who left for nothing. Until the next intervention.

Facade of the Los Otates restaurant in the commercial district of Zapopan. | In Video, the confrontation and kidnapping captured by the diners of the place. Photo César Rodríguez | Video: EPV

The owner of the shot-down restaurant, Los Otates, Bernardo Padilla, tells from the deserted premises of customers six days later how an event like that has affected them: “This creates fear. Too bad the guy they were coming for was here. Luckily we have received the solidarity of the business and hospitality sector and they have supported us in these difficult days ”. The businessman, suffocated like many others by the temporary closures derived from the coronavirus health crisis, now faces a new challenge: “In addition, now we have to add insecurity, the bad image of a fact that had nothing to do with our business”, laments Padilla, CEO of this family restaurant founded by his grandmother 71 years ago.

In the metropolitan area of ​​Guadalajara, which includes, in addition to the capital of Jalisco, eight other municipalities —Zapopan, Tonalá, Tlaquepaque, Tlajomulco, El Salto, Juanacatlán, Ixtlahuacán and Zapotlanejo— 1,553 murders were committed in 2019, more than four a day. And in 2020, in the midst of the pandemic, this figure dropped slightly to 1,369, almost 200 fewer deaths. The state government, led by Enrique Alfaro – a staunch opponent of Mexican President Andrés Manuel López Obrador – celebrated the drop in homicides that year, leaving aside a macabre pattern: bodies often do not appear and therefore are not counted. To those two years there are at least 406 other bodies found in clandestine graves.

Also just a week ago, shortly after the Zapopan shooting, up to 18 garbage bags with human remains were found in front of the Chivas soccer stadium, in the same municipality. Until eight days later, forensics were still putting together that human puzzle of arms, heads, legs. This Thursday, the authorities have confirmed that there were six victims, although they have only been able to identify two, who had a disappearance complaint. Neither of them figure in the death figures for Guadalajara.

With less showcase than the Zapopan shooting, the Flores family witnessed another scene of war that has been forever marked on the humble facades of their houses, now perforated by high-caliber bullets, in Tlaquepaque. A week before the restaurant shooting, a pickup truck loaded with rifles, grenades and wads of bills was snaking through the labyrinth of unplanned streets in the Lázaro Cárdenas neighborhood. Inside, four men ready to die killing soldiers. On their heels, every possible National Guard force trying to catch up.

“The gangsters didn’t count on that street being closed. And when they got there, bang! That the soldiers fall on them ”, Luis Manuel Flores, 57, told this newspaper. Flores points to a point that is no more than five meters from the room where he slept that night with his wife. From the window that overlooks his room, he observed how the soldiers of the National Guard – the new military and civil body created by López Obrador – ran, who had just surrounded the hit men right outside his house. On the corner of a street no more than 10 meters wide.

Right there, three of the four members were riddled with bullets of a caliber that left their bodies unrecognizable. “I tell him that they shot from so close, that their heads were open in flower,” says Sagrario Pérez, 32, Flores’ daughter-in-law, who shows horrified photographs from her cell phone. From under the beds, behind the closed doors of their rooms and with fear running through their bodies, the family heard how the last of these men was killed.

“He was all shot and laughed, he couldn’t stop laughing. He looked like the devil, ”adds Pérez. “They peel my cock!”, Says Flores, who was yelling at the agents. “He didn’t stop shooting, I think he had a rifle in each hand. As the soldiers charged, he didn’t stop. Like crazy, ”says another neighbor, Jessica Guadalupe Rivera, 26. That night of February 3, he was also shot. And the neighbors had to sweep the remains of brains and some bones from the doors of their houses.

Flores’ sugar rose to 500 and he has not seen through his left eye since then. They dream of that maniacal laugh. The children play with a broom to shoot their neighbors: “Stop! National Guard!”. And no one from the Government has approached this poor neighborhood in the metropolitan area to attend to the damage of a brutal confrontation between the drug traffickers and the authorities. Neither the Prosecutor’s Office nor the federal government has provided any information about that operation. In this corner of Guadalajara, its neighbors are living with a crisis that overcomes the pandemic, not a single mask is observed.

From the car of José Luis Escamilla, a police note reporter for Notisistema, the radio frequency of the State Police is heard. Escamilla has learned, like all the journalists of events in the Jalisco capital, to decipher the police codes that warn of the cruel face of this city. 11:54 am on Wednesday February 17: “57-13 in Gigantes and Doctor Pérez Arce”, a man injured by a firearm. “A 97”, they are asking for an ambulance, he is serious. A 69 is dead and a 39-93 is a “suspicious object.” “They are always bagged or cowering bodies,” explains Escamilla.

The reporter says that it is not that there is more work now than before, the dead have not stopped piling up for at least four years, when the internal war between the local cartels began: “What is surprising is that nothing happens,” he says . There is one of the most important cities in the country, faced with almost absolute impunity for its crimes.

At 9.46 am on Wednesday, February 17, the police alerted by radio of a suspicious package. “Male. Tied hand and foot, covered with a plastic bag from head to waist ”. There it was, on the highway to Saltillo, a few minutes from the golf club. If the criminals had wanted to at least hide the body, they would only have to have pushed it a few meters towards a rocky ravine towards the mountains.

But the body of the huge gray hands lay visible in the gutter. Only a day before and on that same curve, two other bodies were found there: a man tortured and bagged, and another who was dying with a bullet in the skull. Not even the assassins had to think of another location. Any corner of the Guadalajara metropolitan area is safe for them.