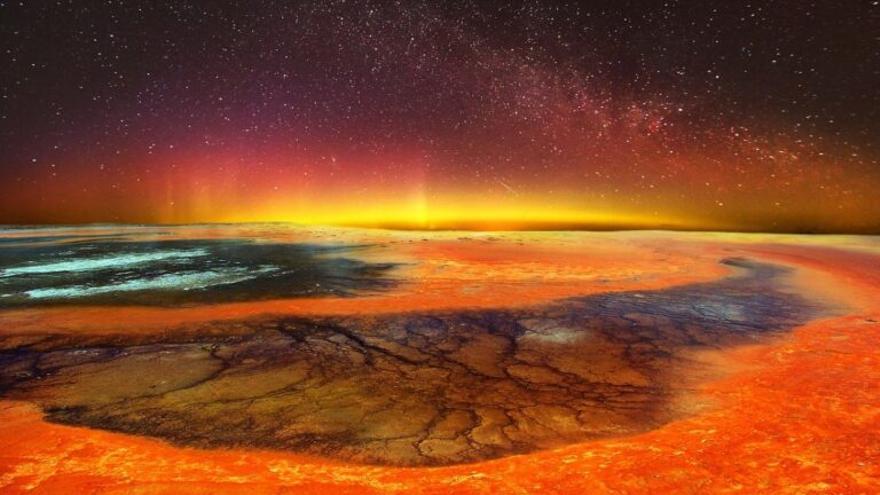 Earth is approaching the strange worlds it knew tens of millions of years ago, warns the legendary magazine The Atlantic Monthly in a documented report, compilation of different studies.

Remember that throughout the Phanerozoic eon, when living organisms took complex shapes 500 million years ago, CO2 was the main driver of Earth’s climate.

He also points out that all known human history has so far played out in the most stable climate window of the last 650,000 years, but adds that that moment is coming to an end.

“We are heading towards a planetary state that has not been seen in tens of millions of years, a world for which Homo sapiens did not evolve,” says the magazine.

New CO2 storm Today, and once again in Earth’s history, we are in the midst of a CO2 storm, with concentration levels in the atmosphere higher than at any time in the last 800,000 years, informs la National Oceanic and Atmospheric Administration (NOAA) de Estados Unidos.

It is a new situation in human history, but not in the history of the planet: when so much CO2 was reached in the atmosphere in the past, the oceans were 21 meters above current levels.

And even if we managed to maintain current CO2 levels (413.2 parts per million in 2020, according WMO), it will take centuries, even millennia, for the planet to fully find its new base.

The future becomes the past: “the transition will be a punishment in the short and long term, and when it is over, the Earth will look very different from the one that cared for humanity,” the magazine writes.

This is the sad lesson of paleoclimatology: The planet appears to respond much more aggressively to small provocations than many of our models have projected, The Atlantic concludes.

50 million years Paleo-climatologist Jack Williams, from the University of Wisconsin, points out about it in The Daily Galaxy: “we can expect that in the coming decades the climates will look more like those of the warm Pliocene, approximately three million years ago, or perhaps even the greenhouse Eocene, 50 million years ago”, which closed with a mass extinction.

In the last 540 million years, the Earth has undergone five mass extinction events, each of which involved processes that disrupted the normal cycle of carbon through the atmosphere and oceans, as is occurring today.

These globally fatal carbon disturbances unfolded over thousands to millions of years, and coincide with the widespread extermination of marine species around the world, recalls The Daily Galaxy.

The big question, still unanswered, is whether the current carbon cycle could cause a sixth mass extinction, which could last 10,000 years.

Do we go back to the past?

Do we go back to the past? Although it is risky to link ancient carbon anomalies, which occurred over thousands or millions of years, with current carbon cycles, which have occurred for little more than a century, we do not know whether humans, flora and fauna, they will be able to adapt to new situations, the scientists emphasize.

According to a study Conducted in 2017 by Daniel Rothman, a geophysicist at the Massachusetts Institute of Technology (MIT), in 2100 we will pass the critical threshold that triggered previous mass extinctions in the past.

That means that we could go back to the past in shorter time cycles than those that took place in the geological past.

We are already noticing

We are already noticing Species and ecosystems are indicating this: they are very sensitive to changes when global temperatures rise (the annual average for 2020 is an increase of 1.02 ° C, according NASA) and we are already noticing this on all fronts: species change their distribution areas, forest fires intensify and natural disasters have multiplied by 5 in the last 50 years, according the WMO).

The scenarios of the past that we are evoking do not affect only terrestrial ecosystems, but also different aspects of society, something that the United States authorities have revealed before the next COP26 meeting on climate, which begins this next Sunday. in Glasgow.

The Wasgington Post stand outIn this regard: The White House, intelligence agencies and the Pentagon warn that climate change exacerbates the threats that already weigh on the security of the world. Not only geology, but also human civilization, trembles.

The Atlantic sums up the situation like this: a small population of our particular species of primates has, in just a few decades, unlocked a huge pool of old, dormant carbon on Earth, accumulating since the dawn of life, and has started a slaughter. global history of the Earth to drive modernity.

As a result, up to half of Earth’s tropical coral reefs have died, 10 trillion tons of ice have melted, the ocean has become 30 percent more acidic, and global temperatures have skyrocketed.

If we continue down this path for one more geologic nanosecond, who knows what will happen? The next fleeting moments are ours, but they will echo through hundreds of thousands, even millions, of years in Earth’s history, the magazine report concludes.