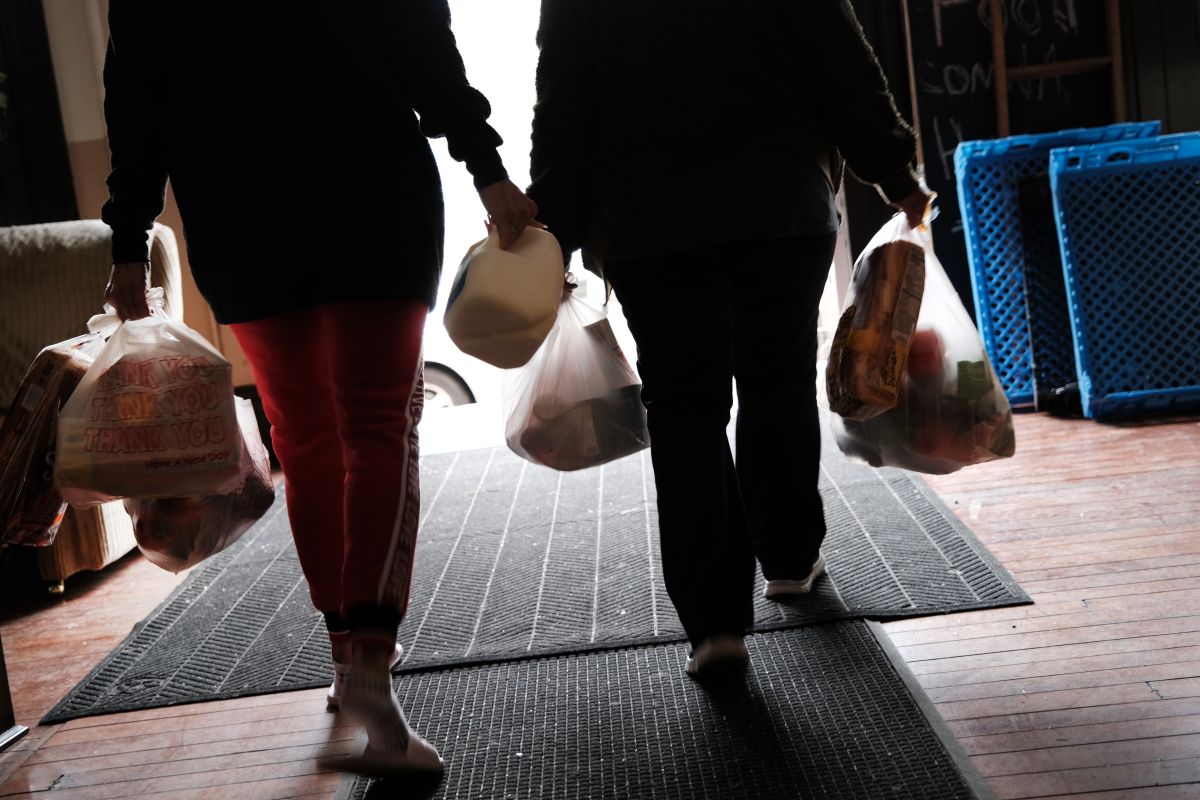 Beneficiaries leave a food bank at the West Kensington Ministry of the NGO Small Things in Philadelphia.

The non-profit organization “Economic Security Project” joined the voices that pressure the Biden Administration for the approval of a fourth stimulus check for coronavirus.

The main reason, the group puts forward in a report, is to lift millions of Americans out of poverty.

Last March, the United States Congress approved the “American Rescue Plan” that included a third round of checks for $ 1,400, as well as an extension of $ 300 a week in unemployment assistance, among other provisions to rescue individuals and families who they continue to suffer the economic impact of the pandemic.

However, for some political leaders of the more liberal wing of the Democratic Party, and organizations like the previous one, the third check is not enough to alleviate the economic crisis that the coronavirus unleashed.

“Let’s do this again. We are going to make this automatic ”, supported the entity through its director Adam Ruben. “We are going to tie this to economic conditions so that people are not at the mercy of stagnation in Washington.”

Data on the group’s website earlier this month citing the results of the Census Household Pulse Survey confirmed that most Americans are using the money from the most recent round on basic necessities such as food and paying bills, among others.

“The numbers show that stimulus checks have been the most powerful tool the government has to help Americans survive this crisis, and they are desperately needed by low-income families for basic needs like food, rent and money. gas”, Ruben indicated about the data.

“For low-income workers and Latinx communities, the crisis is not over – we need more checks to make sure that the recovery reaches everyone, and put lifeguards in place as automatic stabilizers that keep families from falling into trouble. poverty when the next crisis hits, “added the spokesman.

The impact of these direct transfers is greatest in so-called minority communities such as Blacks and Latinos, who would receive twice the economic boost compared to white families in the United States.

The previous call adds to that of several Democrats in both the House of Representatives and the Senate for new direct payments to Americans for the duration of the pandemic.

In January, 50 representatives (the majority from the Progressive Caucus) and 11 senators sent letters to the new president to insist on recurring or monthly payments as part of a new stimulus package.

While in early March, a group of Democratic senators and the independent Bernie Sanders indicated in a letter to President Joe Biden that the crisis is far from over and the Government must opt ​​for recurring payments.

“This crisis is far from over, and families deserve the certainty that they can put food on the table and keep the roof over their heads,” states the senators’ letter that also advocated for the weekly extension of $ 300 aid for unemployment that in the most recent approved package it was extended until September.

So far neither the presidente Joe Biden nor have their representatives mentioned the inclusion of a fourth check as part of a new stimulus bill.