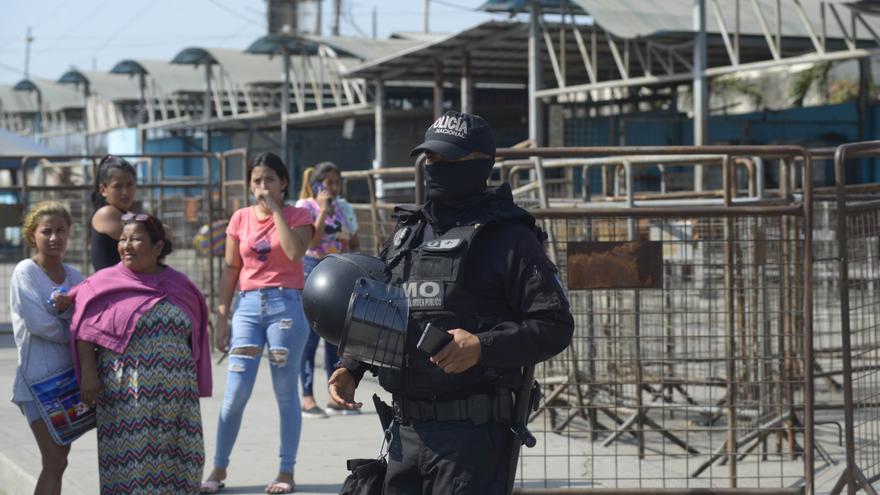 More than a thousand policemen and soldiers they intervened this Thursday in the operations and raids of the Police and the Armed Forces in the prison number 1 of Guayaquil to seize weapons from inmates and avoid tragedies such as those that, on Tuesday, left at least 118 dead and 79 wounded.

In total, more than 900 police officers from different units took part in the search and control operation inside the so-called Litoral penitentiary center, according to the general commander of the Police, Tannya Varela, to which an indefinite number of military and various tanks. “Our presence here is due to legal support, which is the most important thing, given these circumstances and these situations that we are going through,” said the commander-in-chief before hundreds of agents concentrated in a surface near the prison.

So far, the forces of order have launched an operation in the early morning and another around noon. But they will not be the only ones. “The operations in the last hours on the part of the military and the police are constant. In the early morning they entered several pavilions, and at noon to others,” the spokesman for the Government of Guayas, Jefferson Merchán, confirmed to EFE.

According to the latest police report, the forces seized 3 pistols, 435 bullets, 25 knives, three explosive devices and several doses of drugs.

In the operations, the tactical units Intervention and Rescue Group (GIR), Special Operations Group (GOE), Anti-Narcotics Mobile Special Group (GEMA), Order Maintenance Unit (UMO), and Criminalistics took part, while a helicopter flew over the entire area. So did agents of the preventive, investigative and intelligence axes, confirmed the Police.

Also Read  The mobility of the future reaches MAPFRE policies

The interventions aim to search the entire center to seize weapons from the inmates who on Tuesday staged the bloody brawl, the third this year with dozens of victims, although account settlements are weekly.

The action of the police and military forces occurs under the exception decree promulgated by President Guillermo Lasso to deal with the crisis, and will last two months on a national scale, that is, in all the centers of the penitentiary system, commonly referred to as SNAI. And it is that Tuesday’s incident has once again highlighted the severe crisis that has afflicted the Ecuadorian prison system for three years. So far in 2021 alone, more than 230 prisoners have died in this type of event., with its epicenter in that prison in Guayaquil, a city where criminal activity in the country is also concentrated due to its port nature and where more than 430 people have been murdered in the streets until August.

The incessant clashes in the prisons reflect the power struggle between gangs such as ‘Los Choneros’ and ‘Los Lobos’, there are others less important, for the control of crime and drug trafficking, according to the authorities.

The hard work of identification

Along with the operations and the militarization around the prison, the Government of the province of Guayas has established a center for support and “social and psychological accompaniment” for family members, who have been roaming the city since Tuesday in search of answers. . The center works in the Samanes Park, in the Abel Jiménez Parra Coliseum, although as EFE has found at the moment it is not offering information, but rather collecting data from family members to later identify victims. The vast majority of the bodies, many of them torn to pieces according to the daunting images that have circulated on social networks, and with at least five beheaded, are in the morgue pending identification.

Also Read  Oltra: "Confinement is not a scenario that can be ruled out"

Henry Coral, in charge of Criminalistics, explained to EFE that as they do not have “any type of information, they asked for the help of relatives”, either with identification numbers or distinctive that allow “individualization” of people. For his part, Manuel Cucalón, mayor of the Guayas province Police, regretted that “the process takes time due to the circumstances of the misfortune we have suffered.” “Many bodies have to be identified at the site. However, there have been people here who have been able to hear from their relatives,” he said at the gates of the Coliseum.

The new massacre has generated the condemnations of human rights organizations inside and outside the country. In its Twitter account, the Inter-American Commission on Human Rights (IACHR) warned that so far this year in Ecuador “more than 200 people” have died as a result of violence in prisons, and urged the Ecuadorian State to “investigate ex officio and with due diligence the facts. ”

For its part, the Alliance for Human Rights Ecuador has demanded that the prison system be declared a humanitarian emergency and that urgent international technical assistance be requested. “The State does not have the technical capacity to be able to solve the structural problems of the crisis,” this Alliance, which brings together 18 organizations, said in a statement. “The only response of the State has been to apply a securitist approach, fueled by stigmatizing and reductionist discourses, which seek to dehumanize people deprived of liberty,” he denounced, rejecting the “militarization” of prisons.