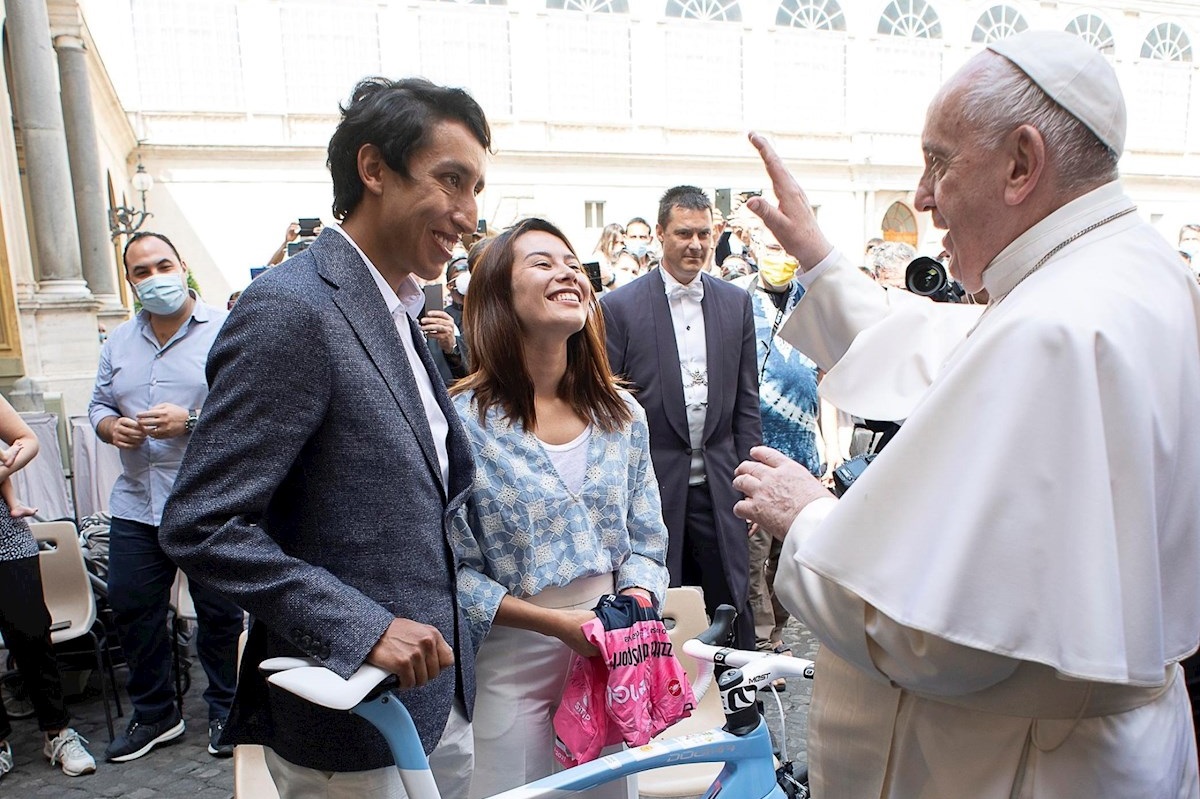 The recent winner of the Tour of Italy, the Colombian cyclist Egan Bernal, gave the pope the pink jersey and a bicycle with the colors of the Argentine flag on behalf of “all Colombians” and assured that this experience has been “more important for him than winning the Giro and the Tour.”

“I think I have had many experiences in my life, but this one is unique. It is the most beautiful I have had in my life. My family is Catholic and I am Catholic and I did not expect your presence. This moment was incredible. I am very happy with this that I just experienced. It is the most important experience of my life, more than winning the Giro and the Tour. It is unique, ”the INEOS team cyclist told the media after his meeting with the pope.

🇨🇴The Colombian gave him a bicycle and the ‘pink jersey’

🗣️ “It is the most beautiful experience of my life,” said Bernal. pic.twitter.com/mnTOQAfXQM

The 24-year-old champion from Zipaquirá, also a winner of the 2019 Tour de France, went to the Vatican accompanied by his girlfriend, María Fernanda Motas, and the Colombian ambassador to the Holy See, Jorge Mario Eastman.

After the meeting, he was still nervous about seeing the pope. He assured that being in front of such an important person “is almost more stressful” than a great stage-

“This is a thousand times more stressful because I didn’t know what I was going to say. I had some words ready, but I was very nervous, although once we started talking it was easier ”, said the cyclist.

After receiving the bike and the Giro leader’s shirt, the pope, Bernal explained, began to joke and asked him “how many reds (coffees)” did he drink “to go up so strong.”

For his part, the champion told the Argentine pontiff that the gifts were from him “and from all Colombians who at this time need a blessing from him.”

And he confessed that as a Catholic he usually pray before each key stage and entrust himself to God.

Bernal will travel to Colombia this Thursday, where he really wants to rest and be with his family, before sending a message to his compatriots: “A lot of strength because it is a difficult time and you have to have faith and everything will improve.”

He anticipated that he hopes, as when he won the Tour, to have a party to “make the official delivery of the pink shirt to Colombia” and, although it will be different due to the anticovid protocols, he hoped that something can be celebrated already this weekend

When asked if he was going to race in the Vuelta, the Colombian champion stated: “I have always said it and I think about it. There are three greats and this is the Triple Crown and I hope I can win the Vuelta to complete it. I still have the Tour of Spain and I think it would be a dream. This would be really incredible for me and for the sport in general ”.

“Although it will be very difficult,” he recalled that he is only 24 years old and has time to get the Triple Crown after his Tour victory in 2019 and this year’s edition of the Giro.

He defended that cycling “has passed” its stage of doping scandals and “that it is one of the cleanest sports now, as it is very controlled.”