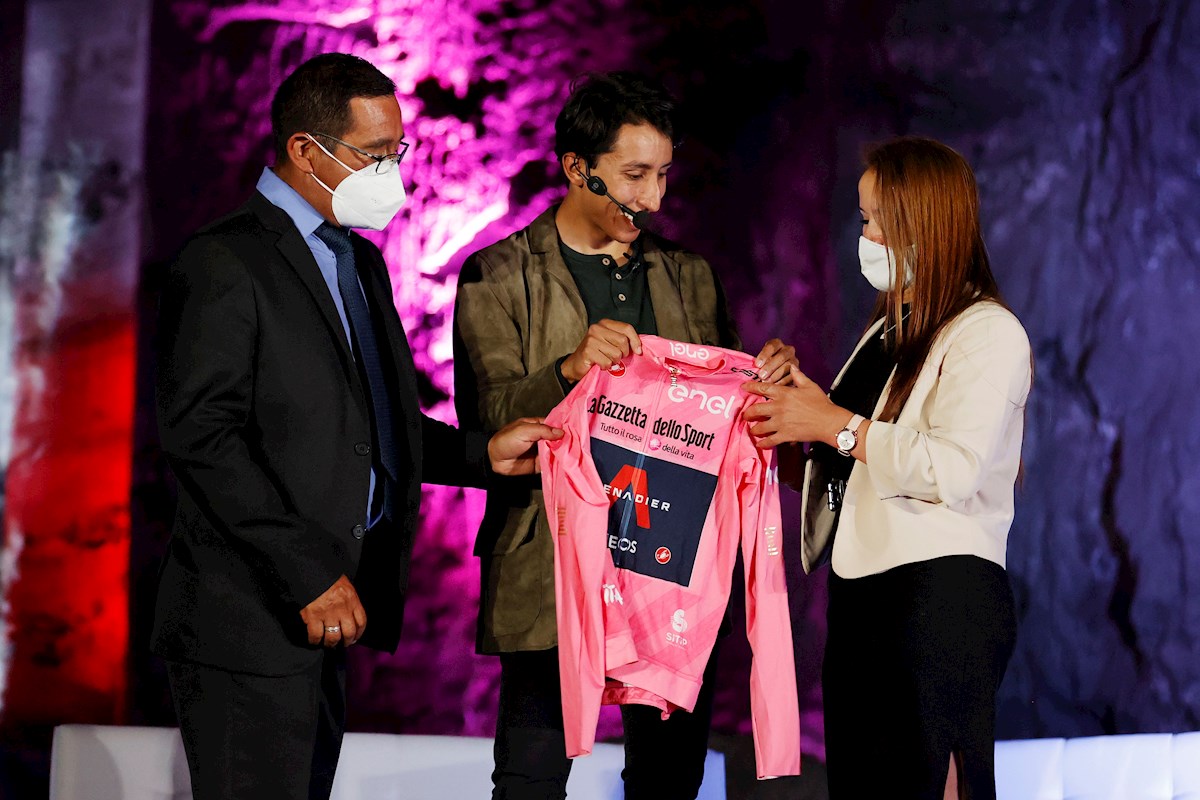 Weeks after embracing glory again, overcoming Covid-19 and being received by Pope Francis in Rome, the Colombian Egan Bernal, shared this Saturday with his country having won the Tour of Italy, which together with the Tour de France and the Vuelta a España, are the most important stage races in the world.

Bernal (Ineos), 24, was honored by his family in the Salt Cathedral of Zipaquirá, which for the occasion was dressed in pink and which only a handful of people could enter avoiding the crowds to block the way to possible infections by coronavirus.

There, in the Cathedral built 180 meters underground, about a thousand people, including a group of children from different sports schools, welcomed the Giro champion, which in 2019 also brought them the Tour de France title.

The 14 stations of the Via Crucis, as well as the three naves of the cathedral were flooded with pink, highlighting not only the cyclist’s sporting achievements, but also giving way to Egan’s deep conviction as a Catholic, in line with the visit he made. to Francisco in Rome, to whom he gave a bicycle and a mesh rosa.

Bring joy for the difficult moment

In the central nave of the Cathedral and guarded by a huge cross that was dressed in the yellow, blue and red of the Colombian flag, Bernal joked and said that he was more nervous than in the last stage of the Giro.

Next, the Zipaquireño said: “It is no secret to anyone that after winning the 2019 Tour, at only 22 years old, I had a difficult time in my life. Feeling that I was at the top of world cycling and the following year not even being able to hold the rump and having to withdraw from the Tour taking number one due to a physical problem, was really very difficult ”.

With moments of broken voice, Bernal continued and said that thanks to the Ineos team “we wrote the name of Colombia in the Endless Trophy”, which the Giro champion receives.

As of that Sunday, May 30, Egan Bernal’s name was marked on the “Senza Fine Trophy”, considered one of the most beautiful awarded to the winner of a cycling race.

It was manufactured for the first time in 1999. It weighs about 10 kilograms, is made of 18-karat gold-plated copper and measures 53 centimeters in height by 20 in diameter.

“Today I want to deliver the pink shirt to all of Colombia because we know what a difficult time we are going through and I want to contribute something positive,” said the champion.

Tens of thousands of people took to the streets of the country to protest the social and economic policy of the Colombian government.

The protests leave, according to human rights organizations, some 74 fatalities, at least 20 of them by shots from the Police, while the Prosecutor’s Office links 20 deaths to the demonstrations.

Keys to the city

During the tribute to Bernal there were several emotional moments, but he stood out when he himself gave the pink shirt to his parents Flor Gómez and Germán Bernal, of whom the champion said “they have been everything”.

There were also t-shirts for the Minister of Sports, Ernesto Lucena, for “all the support”, for the president of the Colombian Cycling Federation, Mauricio Vargas, and for the mayor of Zipaquirá, Wilson García.

Today we pay a well-deserved tribute to @Eganbernal. In the @salt Cathedral with the @MinDeporteCol @LucenErnesto and the mayor of @AlcaldiaDeZipa @wilsongarciaf We thanked him for putting the name of Colombia up high and we recognized his great talent.#PrideCundinamarqués pic.twitter.com/lZgXEfuUl2

Regarding García, his administration granted Egan Bernal the keys to the city and declared it by means of a decree “illustrious son” of Zipaquirá.

“Thanks to the people who wanted to organize this tribute for me, to my family for all their love and for being my motivation to get up to train every day. There are so many people I should thank today, but I summarize it by saying ‘thank you, Colombia,’ ”Bernal summarized.

At the tribute, one of the masters of ceremony was Víctor Hugo Peña, who is now a cycling commentator on television and who was the first Colombian to wear the leader’s shirt of a Tour de France (2003).

In the middle of the tribute Bernal recalled that to reach the title “it was not all rosy” and that much of the victory is due to his faithful squire Daniel Felipe Martínez.

On the worst day, stage number 17, Martínez rescued Bernal who, barely three kilometers from the finish line, could not find the cadence so as not to give in to the onslaught of his rivals.

That day, Bernal explained, “he was dead” but Martínez, resigning his own aspirations, slowed down, gave him voices of encouragement until he managed to save the stage and the title.

“Dani can be a boss in any team,” remarked Bernal, who explained that Martinez not only worked for him in that stage but in others and that he never abandoned him.

Also read: Egan Bernal, after meeting Pope Francis: “It is more important than winning the Giro and the Tour”