Through the windows of the office of the Naggar shipping services company, one of the oldest in Egypt, a convoy of cargo ships could be seen on Tuesday entering the Suez Canal. The workers of this agency witness the restoration of navigation through the waters of the canal after the container ship Ever Given It was refloated last Monday after six days stranded and blocking this strategic sea route that connects the Red Sea and the Mediterranean.

“I have been working in maritime transport since 1988, more than 33 years, and it is the first time that the canal has been closed like this,” recalls Sherif Gabr, shipping officer in Naggar, whose office in Suez is located in front of the southern access of the canal, in the neighborhood of Port Tawfik. “From today we have started again to give some perspectives of transit to our ships,” explains the Egyptian, adding that two of his ships are still in line to cross.

When navigation through the Suez Canal was restored, on Monday afternoon, 422 ships were waiting at both ends of the track. The first to get going were a group of 37 ships that remained in a large lake in the middle of the track, according to Leth Agencies, a service provider for the maritime industry active in the channel. Lieutenant General Osama Rabie, head of the Suez Canal Authority, advanced that they will try to clear all waiting areas in the next three or four days. 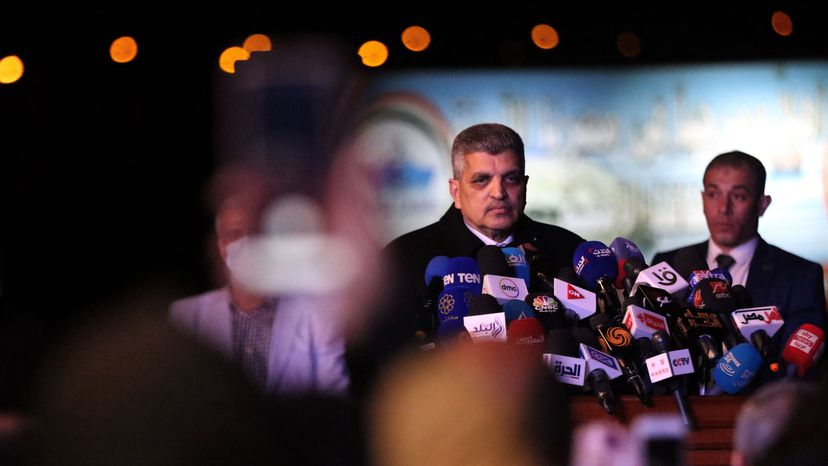 This Tuesday the canal could already be left completely free after six other ships that were also anchored in the previous large lake joined the thirty ships that arrived from Port Said, in the Mediterranean access, in the morning to finish crossing. together. Since then, the usual north and south convoys that cross the canal at the same time have been resumed, and it was planned that a total of 76 ships would cross it throughout the day, complying with initial forecasts. Under normal conditions, a convoy from the South and another from the North cross the canal every day, Gabr explains, but now the authorities plan uninterrupted convoys until the unusual queues caused by the Ever Given. This Tuesday afternoon there were still 352 ships waiting, according to Leth Agencies, as new ships are arriving.

From the peaceful cafes of the Suez promenade, ships anchored in the Red Sea waiting to enter the canal can be recognized in the distance. In a normal situation, it is a precise and calculated pause, which the shipping companies take advantage of to receive services and, in many cases, carry out crew changes, says Gabr. However, also these works have been altered until now, since the queues of ships that have formed (which reached about 100 kilometers) are too long to assist them.

“Egypt is in the center of the world and flights are cheap, so most ships prefer Suez or Port Said, since the ship will stay half a day or a day in the anchorage area anyway”, indicates the boarding officer in Naggar. ”This is all an emergency situation. Before you knew which convoy you were going to enter, but today you don’t know. So far our ships have no warning. The names of the ships that will travel in the next groups have not been given ”.

“When a ship like the Ever Given blocks the canal and you have owners and so many ships waiting to go through with such a mess, obviously the losses for everyone are enormous. Frankly, it has been very hard, ”says Mohamed El Helw, CEO of the Naggar company with 40 years of experience in the shipping industry. “But [la Autoridad del Canal de Suez] he’s working hard ”, he confides.

In the short term, the resumption of canal navigation is expected to add new pressure to supply chains. In this sense, to the congestion problems caused in ports and terminals by the arrival of a million containers that were estimated to be blocked in the queues of the canal are added trips canceled due to the general delay of ships, the deterioration of goods and a lower availability of container ships, experts note. “The dominoes have already been toppled,” writes Lars Jensen, an expert on shipping. “These side effects will take several months to fully resolve.”

Who also took advantage of the opportunity this Tuesday to navigate the canal aboard the yacht Sinai was the President of Egypt, Abdelfatá al Sisi, who, despite having claimed responsibility for the rescue operation of the Ever Given As a sample of the country’s capabilities, he assured in a speech that it is important to learn the lesson and that they will acquire the necessary equipment in case similar challenges arise in the future. “If we have to get equipment in the midst of the evolution of giant ships, we will hire it immediately regardless of cost and circumstances,” he advanced from the city of Ismailia.

Rabie, for his part, explained that the main objective will be to improve the dredgers of the Suez Canal Authority, and explained that they will soon receive two of them from Holland. His entity, he says, has closed an agreement with a Chinese company to produce five new tugs.