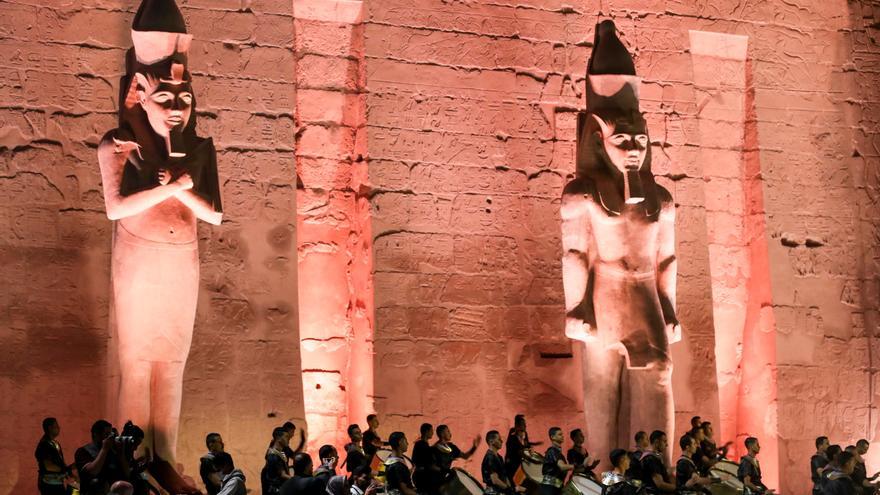 Egypt held this Thursday a pharaonic style show with a procession through the ancient Avenue of the Sphinxes, a corridor between the temple of Luxor and the religious complex of Karnak, with which he wanted to revive the splendor that maintains the monumental city, former imperial capital of Thebes.

As in the so-called “golden parade” last April in Cairo, the Government organized an event with lights, music, dance and a parade recreating a procession that was held in the Theban capital, located on the banks of the Nile in the center of the country, with hundreds of extras dressed as in Pharaonic times.

The ceremony, broadcast live on all Egyptian televisions and shared via satellite with the rest of the world, made connections with other tourist attractions such as the necropolis of the Valley of the Kings, the grandiose temple of Hatshepsut or the Luxor museum, illuminated for the occasion.

A procession from the Pharaonic era

The procession through the Avenue of the Sphinxes copied the main elements of the Opet festival, in which every year, on the 15th of the month of the floods due to the flooding of the Nile River (currently equivalent to September) statues of the gods Amun-Ra, his wife Mut and their son, Jonsu, went out in procession.

This ceremony, which represented the regeneration of Amun-Ra (the main deity of Ancient Egypt) and, therefore, of the Pharaoh himself, was carried out during some times by the Nile and in others by the avenue, which at that time ran parallel to the river, with the boats carried on litters.

As in Ancient Egypt, when the images of the three gods were carried on boats that went out in procession from the Karnak temple, the reproductions of three of these ceremonial vessels were taken to the temple of Luxor between songs, dances, the roll of dozens of drums and fireworks.

But unlike then, when this festival was one of the few occasions in which the common people could see live the rrepresentations of their gods and worship them because they were banned from entering the temples, this time the people of Luxor had to watch it on television.

Only a select group of Egyptian personalities, foreign diplomats and government ministers were present at the event, and as a guest of honor, el presidente Abdelfatah al Sisi, which before the parade traveled part of the restored road.

Recovery of the sphinxes

The excuse for the elaborate promotional event was the completion of the restoration of the Avenue of the Sphinxes, also called the Rams, the largest project of its kind that archaeologists and experts have been working on since 1949 with interruptions, according to the Ministry of Antiquities.

This avenue – 2.7 kilometers long and 76 meters wide that linked from north to south the main religious spaces of the ancient Theban capital – was marked by 1,200 sphinxes, the mythological beings with the body of a lion and the head, in general, human, although some of those of Luxor were of a ram.

The path was covered by houses for a long time, but it was cleared and recovered, as were some of the statues, although not all of them have been saved: a total of 120 sphinxes, 10% of which the route originally had, return to be in place, although many of them are incomplete.

This epic show is part of the Egyptian government campaign to boost tourism and improve the international image of the country around the image of the ancient pharaonic empire, which lived one of its most golden times in the city of Luxor, considered by the Ministry of Antiquities “an open-air museum”.

The campaign started with a spectacular parade of twenty-two pharaohs and pharaohs mummies from the Egyptian Museum in downtown Cairo to its new location, in the new Museum of Civilizations, another recently opened tourist attraction.

He continued with the tricky transfer of the funerary boat of Cheops from the foot of the pyramid that bears his name, on the Giza plateau, to the adjacent Great Egyptian Museum, currently under construction and scheduled to open in 2022.

Egypt aims to recover the number of foreign visitors it lost as a result of the 2011 revolution, which reached close to 15 million annually, and which, after a recovery in recent years, fell again due to the covid-19 pandemic .