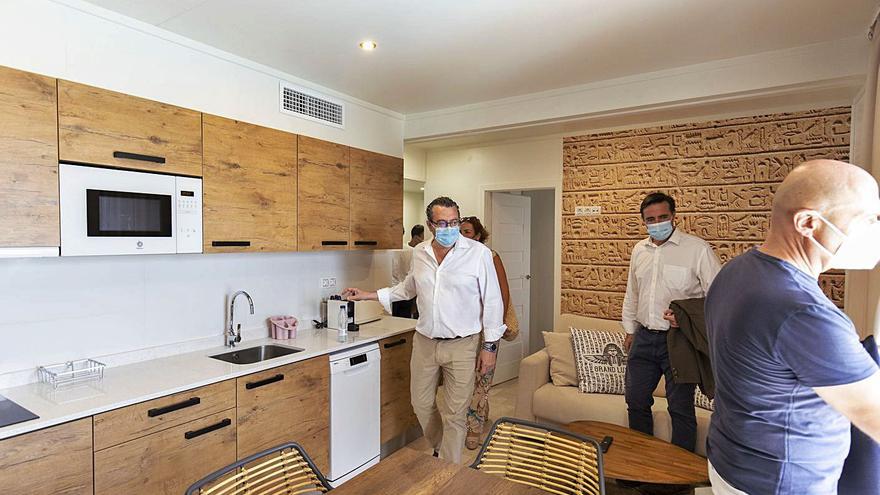 Walls full of hieroglyphs Come in obelisks, sphinxes and figures of warriors. All this simulates a trip to ancient egypt where the pharaohs reigned and where luxury covered the rooms. And some of those unique elements are now within the reach of tourists what can happen some holidays in a millenary environment where the bay of Benidorm, with his acquaintance «sky line», opens at the bottom.

The place is the new villas than the Grand Luxor Hotel, of the Terra Mítica business group, has added to its tourist offer and that are located a few meters from the well-known leisure complex. Its architecture is made so that none stands out above the others and so that visitors can “play” at being pharaohs and decipher those letters with such well-known shapes.

It is “resort»Receives the same name as its« older brother »: Great Luxor; but this time the distribution of the accommodation is horizontal, with small square-shaped buildings as a bungalows. In total, 102 themed villas with Egyptian aesthetics that give continuity to that Grand Luxor Hotel, the Terra Mítica hotel, inaugurated in 2016.

The project of villas next to one of the theme parks in Benidorm that expands the offer of accommodation. | VICENTE MARTÍNEZ

The project started just before the health crisis and saw the light for this summer season. During this time, the group of the leisure complex has conditioned the accesses to this area and built these 102 villas that are divided into several options: one or more rooms with kitchen and bathroom and several categories. And, according to the owners, half of them with a “gem”: private pools in 51 of them. What’s more, five community pools, playgrounds for children, restaurants or supermarket join the tourist offer which is complemented by the option of being able to go to the theme park a few meters away.

The environment is reminiscent of Egypt, but with a landscaping project with native vegetation. And, as explained by the business group, energy efficiency as a basis. Above all, because some of the private pools can be used in winter with a fully sustainable water heating system. Everything to expand the market to another audience and extend the season; for example, to congress tourism that already operates in the hotel of the complex since it was put into operation.

Attendees to the presentation this Friday.

The Chairman of the Group and owner of the Grand Luxor Hotel and Village, as well as the Benidorm theme parks, Georges Santa-Maria was commissioned this Friday to show this latest project together with the General Manager, Stéphane Mockels. The mayor of Benidorm, Toni Pérez; Francesc Colomer, Regional Secretary of Tourism of the Valencian Community; Herick Campos, General Director of Tourism; José Francisco Mancebo, director of the Costa Blanca Tourist Board; the president of the Hosbec hotel association and his General Secretary, Toni Mayor and Nuria Montes, joined the tour of the villas.

With the reopening of part of the leisure complex, following the closure due to the health crisis, changes have also been made in the Iberia Village area, within the Terra Mítica park.