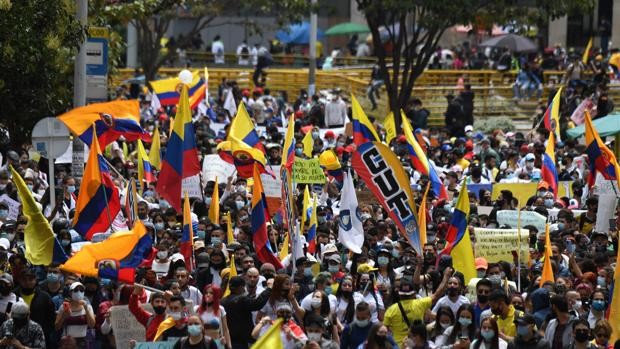 «I call on all political and social forces to direct the mobilization towards the construction of negotiating agendas with the government. It is time to transform outrage into public policy proposals and de-escalate violence. Let’s go for the Colombia we dream of! ». Rodrigo Londoño, the leader of the Comunes political party and former boss of the FARC guerrilla, began his day with those words, and who was one of the signatories of the Peace Agreement. Such an institutional statement would seem from a union leader, from some high government authority, even from President Iván Duque himself, who on Tuesday night before invited the country to participate in a broad dialogue, a roadmap that yesterday morning Wednesday was presented by its High Commissioner for Peace, Miguel Ceballos, already in a conciliatory tone and with the response of the National Unemployment Committee to meet next Monday, May 10. On Wednesday afternoon and despite the rains in many areas, the national strike continued its course. The day had peaceful sit-ins organized by students from many universities in the country. Protesters in different areas of the country continued to block departmental roads, limiting access and mobilization between cities. In the case of Bogotá, located in Cundinamarca, the department closed the day with 21 blocked points. Likewise, the marches continued in Medellín, Pasto, Cartagena, Bucaramanga, among others, where the confrontations between the protesters and the security forces also returned. In Cali, the city hardest hit by the excesses of the public force and by vandalism, at noon yesterday an agreement was reached between the regional organizers of the strike and the authorities: the creation of humanitarian corridors for the entry of food, supplies doctors and fuel to the city, where the marches continued, mostly peacefully. This was a positive step that can be expected to be replicated in a similar way in other parts of the country. Shock or dialogue? Despite the proposed roadmap, which seems to be accepted, rumors on Wednesday afternoon suggested that President Iván Duque, in the face of the public order crisis, would declare a state of internal commotion, a measure that has equally fervent followers and detractors. Is it appropriate for the government to declare the internal commotion in the context of tension and existing distrust? The professor and criminal lawyer Francisco Bernate considers it to be a mistake: «It is an exceptional situation, which allows the president to take powers such as issuing decrees with the force of law, provisionally suspend local authorities that are generating the effects by limiting the exercise of rights fundamental, among others. It is highly inconvenient to take one of these measures, since the ordinary powers that the president has today are sufficient to overcome this situation, not through the excessive use of force, as is happening, but through dialogue. In addition, it is highly undemocratic that these measures are taken without going through the sieve of Congress; it will generate even more rejection in the population and the positions will be radicalized ». The balance of a full week of violence, with looting, excess of the public force, vandalism, human rights abuses, not to mention the impact on infrastructure and private property, is negative and has not yet found a real way out to stop confrontations, nor does it still allow establishing consolidated and verified figures. According to the NGO Temblor, whose reporting platform is a benchmark for national and multilateral organizations due to its data triangulation work, between April 28 and this Wednesday there were 222 victims of physical violence, 37 homicides, 831 protesters arbitrarily detained, 10 victims of sexual violence, 110 cases of fire shots, among other data that the UN asked to verify by installing a monitoring commission, especially for cases of police violence, reported in several cities of the country. For its part, the Institute of Studies for Development and Peace (Indepaz) registers a balance of 31 deaths, 25 of them in the region of Valle del Cauca, a department that has Cali as its capital.According to Indepaz, 13 cases are due to riot squad counts (ESMAD), and four at the hands of regular policemen. The rest, no author known today. For its part, the Ombudsman’s Office indicated yesterday that the official figure is 24 deaths, five of them at the hands of ESMAD, another six due to excesses of police functions and, the rest, with no perpetrator known to date. Without clarity The issue of the figures and the authorship is not minor because, as has been recorded in countless videos contributed by citizens and also by protesters or official human rights defenders, the violence derived from the confrontation between the public force and the protesters have lost all limits, to which are added vandalism by criminals. President Duque reported 553 arrests, of these 538 in flagrante delicto and 15 by court order and stated: «We are hurt by the thousands of Colombian families who have been victims of vandalism, the lives of victims of violence hurt, we reject the acts of violence, attacks on infrastructure, on roads ”. However, the data from the Ministry of Defense, provided by Minister Diego Molano, differ as he stated that the government has detained 431 people. The Ministry has been slow to deliver information, to which was added and the closure of its website – such as that of the Presidency and the Senate – by Anonymus, which in addition to taking down these official pages, has hacked accounts of the National Police. Despite the videos and reports from citizens, international organizations and national NGOs, Minister Molano explained on W Radio that the reaction of the public force is in accordance with the law. «The action of our public force is to act in accordance with the law and human rights. There are Colombians who have remained at home and did not leave, we owe all our protection and security functions to them, “said Molano. He also pointed out that he is unaware of the 87 complaints of disappearances, many of them in Cali, one of the events that have generated the most concern and tension in this city and its surroundings.