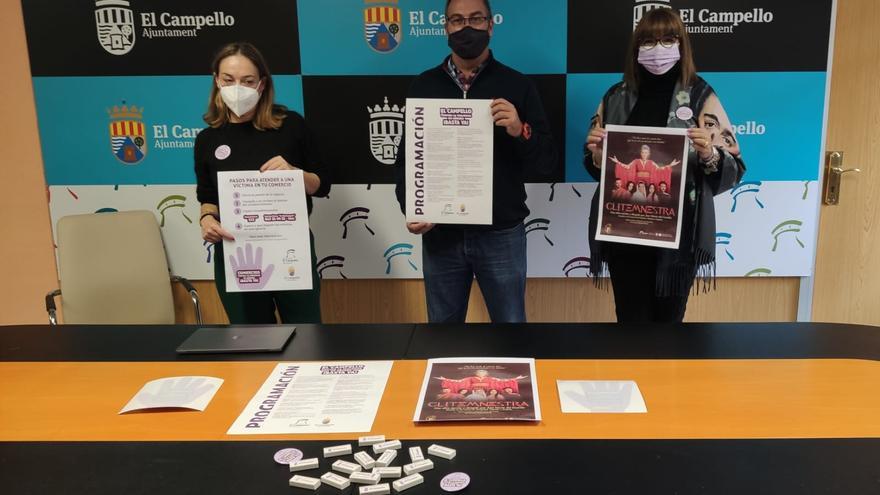 “A type of violence exerted, in most cases, on minors, although it can also be carried out on any other asset or subject that is of value by the abused woman. Terrible murders, unspeakable events, that from the Department of Women and Equality we want to make visible ”, stated Mercé Pairó (Cs).

Next, the mayor reported on the axes on which the 25N El Campello 2021 campaign is based. Four essential axes. “Presence in the street furniture of the public thoroughfare, so that everyone remembers the women who died as a result of sexist violence; advertising investment so that our message transcends our own locality; culture and education as a vehicle for awareness and hope for the future and the campaign in shops against gender violence ”.

To do this, tarpaulins and banners, 40 billboards, 200 stickers and 1000 vinyls have been placed in containers and bins with our “Throw machismo here”, increasing the number of hands to 40, the flagship of the campaign, year after year.

And, as a novelty, the adhesive vinyls that the Department of Women and Equality has supplied to the shops willing to fight against this scourge and the jacaranda that the Department of Parks and Gardens, led by the first deputy mayor, Julio Oca (Cs), who wanted to be present at the presentation of the campaign, has planted next to the central building of the City Hall, as a perpetual tribute to the victims of gender violence. Violet ties with the name of the victims will hang from it.

In addition, the council retakes the reading of the manifesto against gender violence at the doors of the Consistory, on Thursday, November 25, and the tribute march “in memory of the victims who are no longer with us and those who are, are prisoners of this cruelty ”.

Thus, at 6:00 p.m., after reading the manifesto, El Campello will march to the House of Culture where it will be deposited a flower for every fatality, on a canvas, which will sadly have the name of each of the women who died in 2021 printed on it. In the background, the chords of a violin and a sign language translator.

After the heartfelt tribute, the Department of Women and Equality, has brought free of charge to the neighborhood of El Campello the representation of the Greek tragedy “Clytemnestra”, starring Manuela Reina, who shows us the revision of the classic myth fleeing from the macho tradition of history, rescuing a woman victim of a society consolidated by and for men, a woman rebellious with the system, ahead of her time and branded, therefore, cruel and perverse in the eyes of men.

For its staging, it has had the indispensable collaboration of the Department of Culture, led by Dorian Gomis (PP), who has managed the control of capacity and the availability of access tickets to the representation.

In addition, the Women and Equality technique, Mª José García explained the training action in schools with “Erase sexist violence”, in the educational centers of El Campello starting next week, through preventive activities aimed at eradicating myths and the knowledge of the different kinds of violence.

As a culmination of this campaign, which will be present in networks and the media until Tuesday, November 30, the Social Center “El Barranquet” will host on Friday, November 26, the colloquium talk on vicarious violence that will try to make a social drama visible Of unquantifiable dimensions, so that we get out of our comfort zone, so that we realize that today I am me, but tomorrow it can be you. For them ”, ended her exhibition Mercé Pairó (Cs).