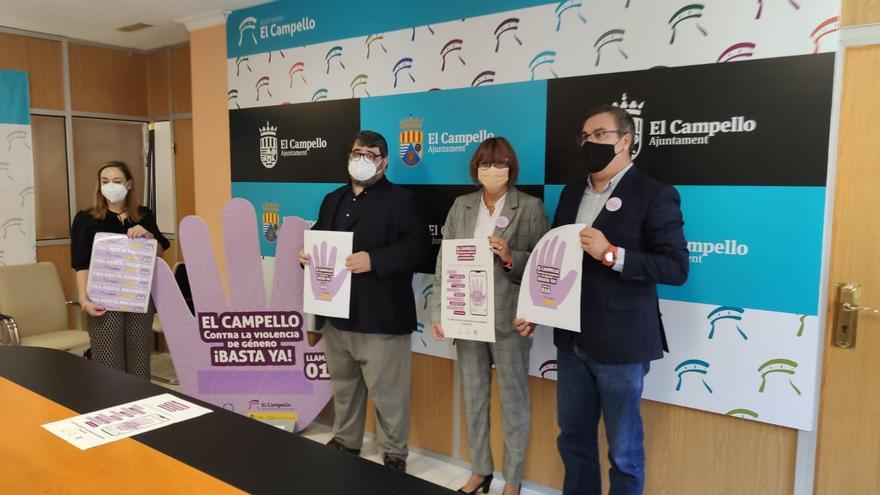 The Department of Women and Equality, led by the mayor Mercé Pairó (Cs), has presented this Monday its second campaign against sexist violence “ENOUGH NOW!”, on the occasion of the commemoration of the next 25N, the International Day against Gender Violence.

The campaign, which this year it focuses on the harassment suffered by women through social networks, will invade our public space and will be widely disseminated through the media and social networks, from Tuesday to December 14, so that “the cry ENOUGH ALREADY! from El Campello against sexist violence reaches all citizens”, they have explained from the City Council.

The campaign to make the campaign visible was attended by the mayor of Women and Equality, Mercé Pairó (Cs), the first deputy mayor and mayor of Public Infrastructure, Julio Oca (Cs) and the technician responsible for the Women’s area. All of them have agreed in pointing out that, in times of covid, there is still another pandemic today, from the origins of humanity, which only affects women and against which we must fight together: machismo.

For Mercé Pairó, “although this pandemic is there and remains over time, thanks to the national and international legal framework, to the comprehensive assistance offered to victims from the Social Welfare councils, to the security offered by the police and prevention campaigns aimed at citizens, slowly but surely, we advance on the path of its eradication.

For the maximum dissemination of the message of this campaign, the Department of Women and Equality, with the collaboration of the Public Infrastructure, has placed 25 violet hands 150×150 cm, in as many lampposts, from the North Zone to the south of the municipality, “so that everyone hears our proclamation”, Julio Oca has affirmed.

In addition, the mayor of Public Infrastructure stated “that the best of the benefits that can be obtained from the urban elements of a city is to put them at the service of any informative action that allows us to advance towards a just and egalitarian society, in this case , against sexist violence ”. In this sense, he wanted to highlight the collaboration of the CNC (Club Náutico El Campello) which has made its own infrastructure available to the Department of Women and Equality for the dissemination of the message of awareness and rejection.

For this reason, the campaign will also be present in 1,000 bins Y 100 containers that will show the motto “Throw machismo here”; 10 Mupius and in 100 shops of the town that, thanks to the collaboration of the Department of Commerce, directed by Mª Carmen Alemany (PP), have made their shop windows available to the fight against sexist violence. In them, a poster with a QR code will provide us with more information to detect signs of harassment of women, through social networks.

In addition to the traditional commemorative banner of the 25N that will hang from the balcony of the City Hall, this year, as a novelty, from the attic of the Social Center “El Barranquet”, which houses the Department of Women and Equality, will a canvas of 6 x 4 m that will show our violet hand and the helplines for the victims of this violence.

The campaign, in addition to the wide dissemination of communication, will include workshops for secondary school students and an online conference with the University of Alicante on “Covid-19, confinement and gender violence.”

But without a doubt, the act of greatest significance and symbolism will take place on November 25, at 12:00 noon, next to the Centennial Fountain of the Municipal Central Park, where public representatives, local security forces and of the women’s associations of El Campello, will pay a heartfelt tribute to all those women who are gone, who were murdered, victims of sexist violence.

At night, El Campello will wear purple in the Plaza de Saint Christol les Alez, to culminate a tribute, at all times adjusted to the preventive measures dictated against the spread of Covid19, “whose objective is to remind everyone victims of sexist violence, so that we never forget them because, only in this way, will we continue to work with responsibility and commitment so that one day, gender violence will be just a matter of the past ”, concluded the mayor.