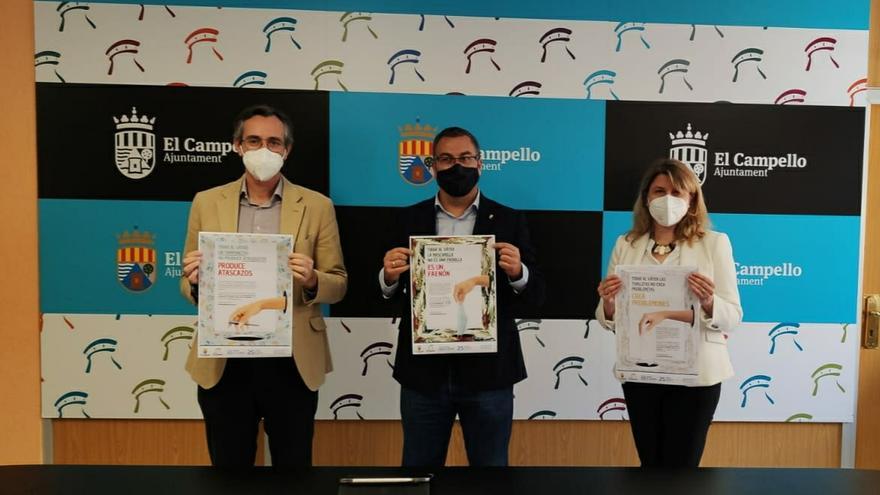 The traffic jams caused by wipes and other waste that are improperly flushed down the toilet cause in El Campello a extra expense of 150,000 euros. The Department of the Environment, led by the First Deputy Mayor Julio Oca (Cs), today presented the campaign developed by Aguas de Alicante, “Enough of diminutives”, with which it is intended raise awareness to the population of the serious environmental and economic consequences of inadequate hygiene practices.

In this way, the first deputy mayor, in the company of the managers of Poblaciones, Sergio Sánchez and Depuración, María Flor García, from Aguas de Alicante, presented a campaign with which it is intended to dimension reality and severity of a problem that it is not insignificant, it is very big, and it concerns us all, as reported by the Consistory in a statement.

Thus, the posters, radio spots and the spot produced by Aguas de Alicante and that the City Council will disseminate through social networks and different media, collects, through a series of diminutives, like “a tampon, a compress , a mask, a swab or a washcloth “, turn our sewer network into a real nightmare,” with the consequent damage not only environmental, but also economic and that, in our municipality, represents a whopping € 150,000 per year ”, Julio Oca highlighted.

The first deputy mayor, in addition, as also responsible for the Services and Maintenance of the municipality, knows first-hand how “traffic jams generate very serious damage to manholes, collectors, treatment plants and other elements of the sanitation networks due to the accumulation of fats, wipes , diapers, sanitary towels and plastics that kill our environment and represent a very important economic burden for citizens ”.

In reference to the great impact environmental, María Flor García has placed special emphasis on the misuse of the toilet. “Along with the serious problems of obstructions, there are also certain types of discharges, with a significant percentage of hygiene articles reaching the sea, increasing the amount of solid waste in the marine environment.” In addition, “to the already traditional elements, such as swabs or wipes, in recent months, other equally harmful ones have been added, such as masks that we use against covid-19 ”.

For his part, the Population Manager, Sergio Sánchez, highlighted the company’s commitment to involving citizens in mitigating this problem. “Through environmental awareness, we have the objective of involving citizens in reducing the enormous impact that the elimination of inappropriate objects has through the sanitation network of our cities” and has specified that, “at the extra cost that occurs , which at the national level is estimated by AEAS at 230 million euros per year, adds the deterioration of the service derived from the constant traffic jams and repairs ”.