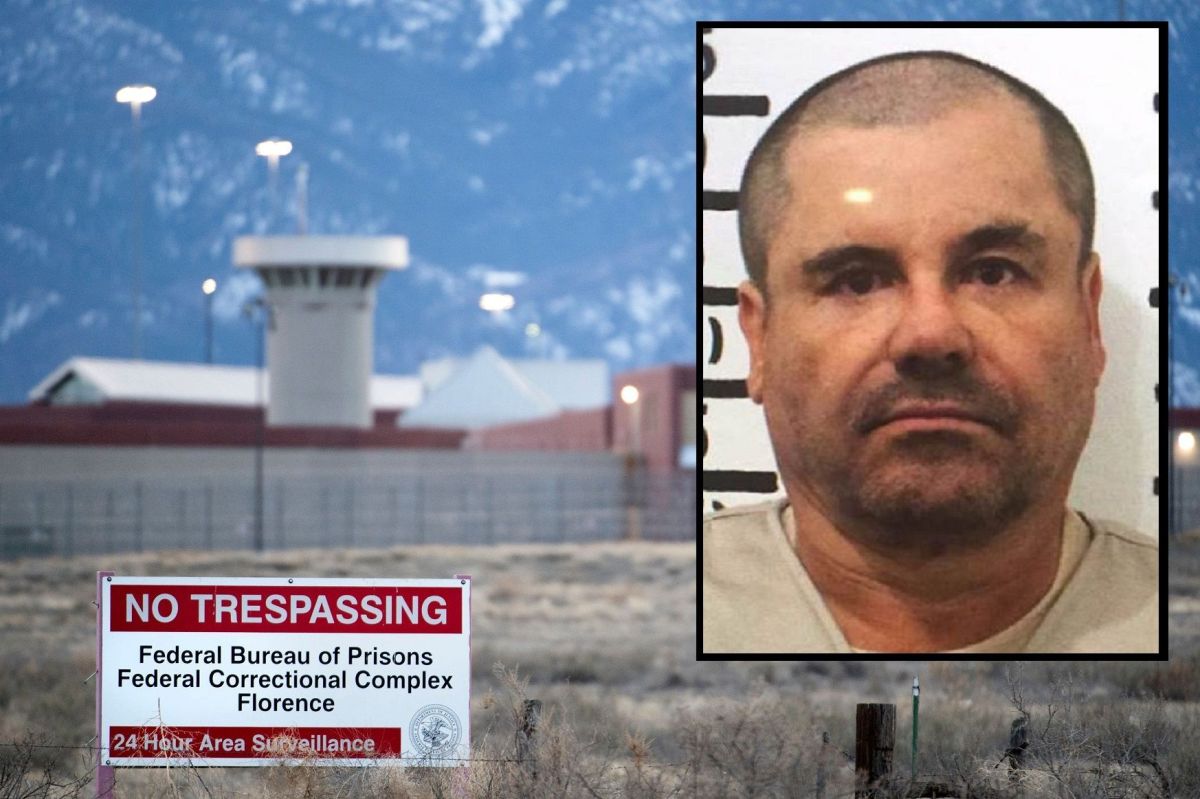 A lawyer for Joaquín Guzmán Loera, better known as “El Chapo”, presented a request to the court asking for a radical change in the conditions of his detention or, failing that, that he be extradited to Mexico.

In the document dated February 12 that was released this Tuesday, it is alleged that the former leader of the Sinaloa Cartel was detained illegally and under conditions. “Cruel, inhuman, equivalent to physical and mental torture.”

However, Judge Gordon P. Gallagher denied both requests a week later. For this reason, Guzmán will continue to be detained in the maximum security prison in Florence, Colorado, where serving a life sentence plus 30 years for drug trafficking.

“Basically he is in his cell with nothing to do, surrounded by the same four walls, in a gloomy and dehumanizing environment”, Attorney Mariel Colón wrote in the February 12 document.

Guzmán is in solitary confinement and is only allowed to go out in the open for one or two hours a week, according to the rules that govern the lives of the more than 350 inmates in the highest security prison in the United States.

El Chapo’s cell, located in the Special Security Unit, measures 7 feet wide and 12 feet long. His lawyers complain that they deprive him of natural light, sleep, clean water and exercise. They don’t give you enough food nor do they allow you to use your own nail clipperInstead, he shares one with the other prisoners for which a fungus has grown on a toe of his right foot, they allege. Even drugs for that treatment have been denied.

You are also denied access to communications and services in Spanish.

Your client cannot participate in educational programs that are only available in English. They also allege that he has applied for an English language teaching course with a teacher in person or on television, but has not been granted it. He also does not know how to put subtitles in Spanish to the programs and complains that they present him with documents that are not translated.

They allege that they violate their correspondence and that some letters have arrived up to a year late.

Additionally, the lawyer denounces that her client have not received the coronavirus vaccine nor has he been given a date for it, despite the fact that due to his age he is among the most vulnerable population.

The defender of the drug lord assures that “he only has the right to two telephone calls a month of 15 minutes each with previously authorized persons: his sister, two minor daughters, his mother” and that “he cannot receive visits other than his lawyers and sporadically his two twin daughters ”.

Guzmán has appealed the sentence handed down by Judge Brian Cogan in July 2019 and he and his lawyers accuse the authorities of not giving him a good deal.

“I expected a fair trial and that my fame was not a factor in the administration of justice, but what happened was the opposite”, Guzmán complained the day he received his conviction in New York’s Eastern District court..

The 12 members of the jury unanimously found Guzmán guilty of the 10 charges against him for drug trafficking.

Now your wife Emma Coronel, who attended almost the entire trial against her husband, even when she was linked to the drug business, She is accused of drug trafficking and awaits her detention until her next hearing.

‘El Chapo’ became the most wanted criminal in Mexico and the United States and twice escaped from maximum security prisons in Mexico before being extradited to the United States on June 11, 2015. This was one of the reasons for the US authorities to keep him in the safest and most feared jail in the country.

“In Guantánamo they were better than us”: life in and after ADX

The Maximum Security Center in Florence, Colorado, also known as ‘The Alcatraz of the Rockies’ or ADX It houses the most dangerous criminals in the prison system, around 375 inmates.

Among the prisoners confined there are Ramzi Yousef, responsible for the 1993 attack on the World Trade Center in New York; the terrorist from the Boston Marathon, Dzhokhar Tsarnaev; Ted Kaczynski, nicknamed Unabomber; or the shoe bomber, Richard Reid, who tried to set off a bomb hidden in his shoes on a plane.

Although little is known about the daily operations of this prison surrounded by secrecy, This is not the first time that an inmate has complained about the conditions there, frequently described as “inhumane”. An ex-convict who spent six years imprisoned in ADX between 2008 and 2014 for his participation in prison riots assured from anonymity that “in Guantánamo they were better than us.”

In 2019, Vice magazine published a report on the great difficulties ex-convicts of this prison have to adapt to life outside of this environment dehumanized.

Jabbar Currence, an ex-con who had spent the last 16 years of his life in a solitary confinement cell at ADX, attacked a woman at a bus stop on his first day of release. “I’m going to kill you,” he yelled as he ripped off her clothes, before being arrested again. His lawyer said he had been recklessly released.

Ernest Shaifer, a man with a mental illness, had been on ADX for 10 years. In 2015, a year after he came out, he nearly killed two women with a shovel. He is now serving a 30-year sentence in a Florida state prison.

Antonie Bruce, who was free for less than six months before stabbing a man with a knife at a homeless shelter, pleaded not guilty after arguing it was in self-defense.

Mario holmes, a 40-year-old man with schizophrenia who spent eight years in ADX for robbing a bank, on leaving in 2014 robbed another bank, was arrested and declared unfit to stand trial. In 2018 he robbed the same bank again. He is currently in a mental institution.

Dale Mitchell Lemoine, a man with a history of mental illness, was shot by police for robbing a supermarket with a pocket knife. cutter in 2008.

With information from VICE News.