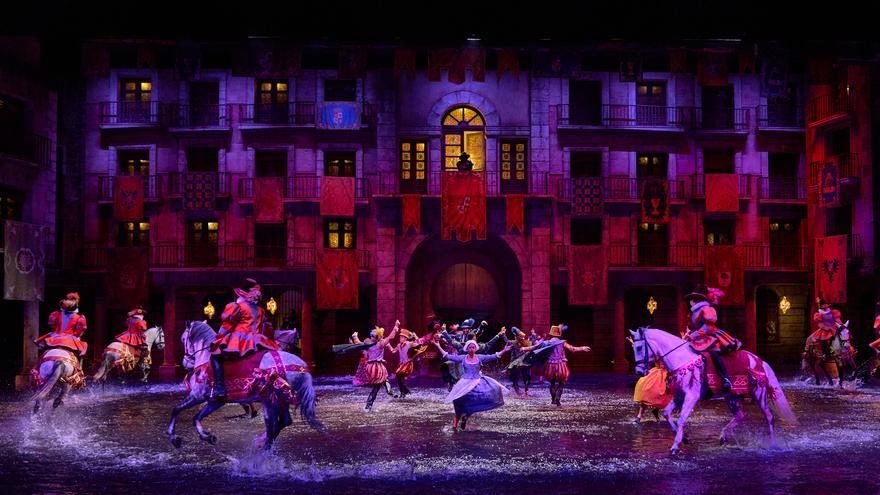 Neither the coronavirus nor the mobility restrictions imposed to stop the pandemic have intimidated Abderramán III, the Cid Campeador, Cristóbal Colón or Lope de Vega in his determined bet to star since last March 27 and until November the new artistic performances of Puy du Fou in Toledo. The show must go on.

Settled in an Andalusian ace-kar of green, gold and ostentatious tents, the Umayyad Caliph of Córdoba Abderramán III and his entourage enjoy a truce after the confrontation with the Christian troops who dispute the dominion of the rich lands of the Duero.

The battle has been bloody in a hot Simancas of the year 939, now reproduced in the entertainment park built in 2019 by the French company Puy du Fou in the heart of Toledo’s dry land. The weapons have given way to a hundred majestic birds that wage the fray in a peaceful feat commanded by the Muslim caliph and the Asturian count of Castile, Fernán González.

‘Falconry of Kings’ is one of the four new shows of the gala brand to remove interest in the history of visitors through the representation of the deeds, feats and heroes that exalt the chronicles of Spain.

“We have no desire for indoctrination,” he stresses. Erwan de la Villeon, CEO of Puy du Fou and scriptwriter for all shows from the Toledo park that gloss the wars between Muslims and Christians, the life of the Cid, the discovery of America and the great Spanish Golden Age.

‘The dream of Toledo’, released in 2019, holds its outdoor evening functions from Thursday to Friday to extol for more than 90 minutes a story that begins with the Visigoths and ends with the arrival of the railway in Spain without giving up a timid incursion into the Civil War.

“We copy the life of birds in nature”

In the early morning and late in the afternoon, when the heat is no longer pressing, the birds of Yannis You cross the clean sky of La Mancha in search of the food offered by the ‘medieval’ falconers in a giant outdoor setting. “We have 200 birds of about 25 different species”, You presume when talking about the mousetrap birds, the barn owls, the black kites, the storks, the hawks, the cranes, the griffon vultures, the royal vultures and the tawny owls that live in Puy du Fou together with raptors from outside Spain like the secretary, the marabou, the caracara and the bald eagle, symbol of the United States.

You and his team also lovingly care for two pairs destined for the breeding of the black vulture and the Egyptian vulture to be reintroduced into the country.

“We copy the life of birds in nature: they look for food in the show and the rest of the day they live comfortably in this immense 30-hectare territory,” he explains with his group of falconers consisting of six girls and seven boys, the majority Spanish, who have joined the Puy du Fou project.

Elies Claramonte, a 31-year-old from Castellón, poses with one of the birds from the show ‘Falconry of Kings’ Puy du Fou

“Being part of this show is a dream”, celebrates the Gran Canaria Julen Bara, 31, at the end of one of the rehearsals for ‘Falconry of Kings’. Bara has changed the control of the fauna of the Barajas and Lanzarote airports for this theatrical project in which he also acts confidently Elies Claramonte, a Castellon of the same age. “We want the people who come to learn to love birds,” proclaims Claramonte with a stork.

The representations of ‘Falconry of Kings’, an average of five times a day, will take advantage of the cooler hours to attend to the well-being of the birds, insists De la Villeon on the way to Puebla Real, near where the imposing Castillo de Live.

A journey through history

The actors of ‘El Último Cantar’, a play dedicated to the Cid Campeador, wander around a circular stage in which different stages alternate that more than 2,000 spectators can observe from a stall that rotates 360 degrees. “It is an honor to play Rodrigo Díaz de Vivar”, the Catalan boasts Adriá Triviño, a 26-year-old actor hardened in Netflix series such as ‘Altamar’ and other streaming series such as ‘The laws of thermodynamics’ or ‘The Baztan trilogy’.

The Catalan Adriá Triviño, in the skin of the Cid Puy du Fou

Outside the walls of the Puebla Real there is the Arrabal, full of stalls and taverns for visitors, who compete with the inns, artisan shops and inns that dot the kilometers of trails in this unusual entertainment park where one can suddenly come face to face with the ‘Monastery of La Rabida’.

Here begins ‘Beyond the seas’. It is in this Huelva place where Christopher Columbus found the help of a Franciscan monk to convince Isabel ‘La Católica’ to support him on his trip to ‘Las Indias’. The fantastic reproduction of this immersive show is signed by the set designer Pilar Revuelta, winner of an Oscar for her work in ‘Pan’s Labyrinth’.

The visitor enters the monastery, sees barely two meters away in The Alhambra to the Queen and the admiral, he toured the bustling port of Palos de la Frontera, met the Pinzones brothers and embarked on a journey full of hardships that ended in the Caribbean of San Salvador, now the Dominican Republic, when the sailor Rodrigo de Triana yells: Land in sight !, after three hellish months in the Atlantic Ocean.

Mar Alonso, head of tailoring, proudly displays the very heavy dress of Isabel ‘La Católica’ and the exact, albeit less heavy, replica of the royal crown made by a Sevillian goldsmith. “In this show, you have to take care of even the smallest detail of the costumes because the spectators are next to them,” he explains this woman who has dressed the actors and actresses of ‘El Capitan Alatriste’, ‘Águila Roja,’ Velvet ‘or’ Las chicas del cable ‘, among others.

Mar Alonso, head of tailoring, with one of the dresses that are worn in shows Puy du Fou

Alonso is now required in a 16th century corral. This is where ‘A Pen and Sword’ is represented, a comedy in the magical style of Puy du Fou where the protagonist is Lope de Vega and the white Andalusian horses that gallop or trot with elegance in the performances guided by riders or amazons such as Ana Gutiérrez, a 26-year-old from Cádiz who lives her own ‘dream of Toledo’ in ecstasy.

A Frenchman converted into Toledo

“Lope de Vega is one of my favorite characters,” acknowledges Erwan de Villeon, “Because he handled the pen as well as the sword,” he adds while observing the essays of this work that begins with an allusion to ‘Fuenteovejuna’ and through which it passes, how could it be otherwise, Cervantes, in one of the multiple twists of the script and change of scenery of this function.

“Our shows are much better than those in France”, proclaims this Frenchman converted into Toledo, when he recalls the Loire Park that for 40 years has glossed the Gallic deeds, twice awarded as ‘best park in the world’.

Image of one of the Puy du Fou shows.

The figure he hates the most is his compatriot, General Dupont, “for having devastated Toledo twice,” he laments.

De María de Pacheco praises his bravery by making it clear to Carlos V that those who wanted to reign in Castile had to be Castilians. “It is my inspiration and I can assure you that, although I am French, I know more about the history of Spain than that of my country.”, He assures on the way to the starting point and near the spaces where Puy du Fou breeds in view of the visitors oxen, sheep, mules, donkeys, donkeys and goats. They have even set up a shady recreation area for citizens to bring their own food to this barren area where they have already planted more than 6,000 plants and a thousand olive trees.

“If the show of ‘The dream of Toledo’ was an absolute public success in 2019 I can imagine what the new functions will mean for the economy of this region ”, he anticipates Adolfo Muñoz, the chef from Toledo, guru of healthy foodWinner of the National Hospitality Award in 2013 and a firm ambassador for Puy du Fou, while he devises new recipes linked to Spanish deeds that pair perfectly with the prized Manchego wines.

Visitors can bring their own food to this barren area where more than 6,000 plants and a thousand olive trees have already been planted. Puy du Fou

Delighted with the entertainment park are also the hoteliers of the city of the three cultures despite having their businesses closed due to the pandemic. The hotels in the capital of La Mancha were fully booked during the nights of 2019 in which ‘The Dream of Toledo’ was represented.

“This will pass and Visitors from outside the autonomous community will come again”, Predicts the businessman Diego Ortega in one of its hotels, the Eugenia de Montijo, now closed tight and guarding the memories of that Granada woman who became empress precisely of the French after her wedding to Napoleon III. The empress, the first ‘influencer’ in history, according to Ortega, spent long periods in this building fleeing from the kitsch of the Parisian court. “We will organize special packages from here to attend the show,” concludes Ortega.