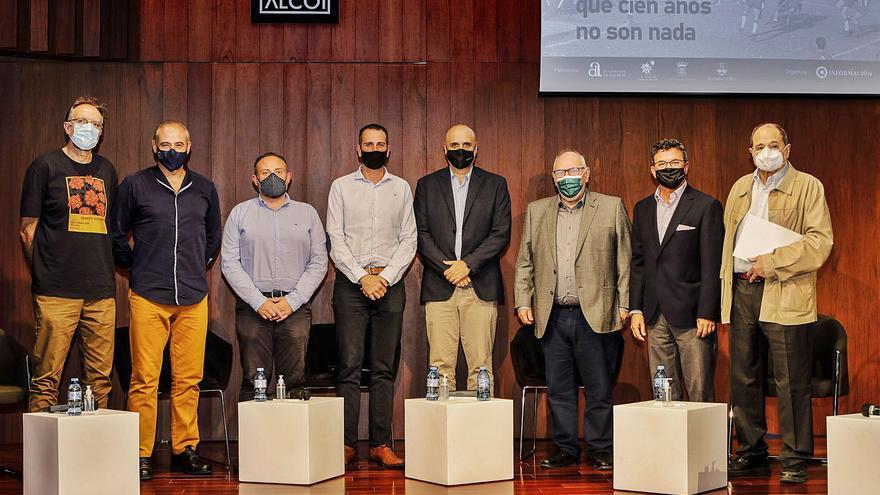 The centenary of the Collao was the central theme of a new appointment of the “Campo a Campo” cycle, organized by the INFORMATION Club and which brought together different personalities related to Alcoyano this Tuesday at the IVAM CADA center in Alcoy. Moderated by the journalist Ramón Climent, the meeting was attended by the president of the club, Antonio Justicia, as well as the former player and former director Toni Castillo, the sports journalist Dany Vilaplana and the former mayor of Alcoy Josep Sanus, architect of the purchase of the stadium by the City Council in 1995. The current Sports Councilor, Alberto Belda, and the director of the INFORMATION Club, Toni Cabot, also took part.

In the introduction to the event, Toni Cabot made a special mention of being at the IVAM CADA, former headquarters of Monte de Piedad in Alcoy and later of the Caja de Ahorros del Mediterráneo (CAM). He recalled the figure of Jorge Abad, «an extraordinary man from Alcoy and from Alcoy, a great executive of CAM when it was CAM, our usual fund. A good man from Alcoy, a faithful image of so many people who represent the best of the land ». And that, as an Alcoyanista, “he suffered, laughed, cried and was moved in that old Collao, centenary and eternal.” For him and all the fans “that we have in our memories today,” he asked for an emotional applause.

For his part, Alberto Belda alluded to the importance of “everything that our Collao entails” for Alcoy, for his “many personal stories that need to be remembered”, and for all the people who in these hundred years “have turned to” the Alcoyano. Among many emotional moments, he recalled a very recent one, when the club eliminated Real Madrid from the Copa del Rey in January this year. This event, he said, “encouraged a lot” to the fans, and was to some extent a reflection of the “fighting and innovative spirit” of Alcoy.

The Collao was inaugurated on August 28, 1921, although the Alcoyano Sports Club was not founded until 1929. “If we are here today it is thanks to the English, who created football,” he said, “and thanks to Alcodiam”, the team existing then and that would disappear a few years later. The initially called Sports Field of the Hospital Highway soon became known as the Collao, after the name of the game. The promoter of the construction of the enclosure was the industrialist Francisco Laporta Boronat, whom Climent recalled during the event. In 1943, Alcoyano bought the stadium from Laporta’s widow, and in 1995, with the club in a delicate financial situation, the City Council acquired it for 305 million pesetas.

That purchase was decisive for the PSOE to lose the absolute majority in the municipal elections held a few days later, but for Josep Sanus the acquisition of the stadium was “mandatory”, since it was something that “affected Alcoy’s heritage and collective memory” . In addition, this was the opportunity for Alcoyano to “start” and overcome their situation. Electorally, he said, “it cost us a disappointment, but I did what I had to do,” at a time when even urban speculation was endangering the future of the stadium.

On the current situation of Alcoyano, the president of the club also spoke, after asking Climent if he felt he had bitten a “poisoned apple” when taking over the reins of an entity with a deficit of 1 million euros. Antonio Justicia picked up the glove and, with humor, indicated that “we are still biting the apple”, for which he thanked the creditors for the “patience”, although he recalled that “practically all sports limited companies” are in a similar position. He also stressed that current field conditions are optimal for a professional category, thanks to the extreme care with which maintenance is carried out.

Toni Castillo elaborated on this issue, while emphasizing that the quality of the facilities has always been an outstanding sign of the Collao. “People were delighted to come, because the lawn was well cared for,” he said. He also showed that “football has changed and now it is more technical than physical”, an issue that Dany Vilaplana also alluded to, who emphasized that “before the coach was everything” in a team, while now everyone clubs generally have a large coaching staff.

Another moment of the meeting, with the journalist Dany Vilaplana on the bus. | JUANI RUZ