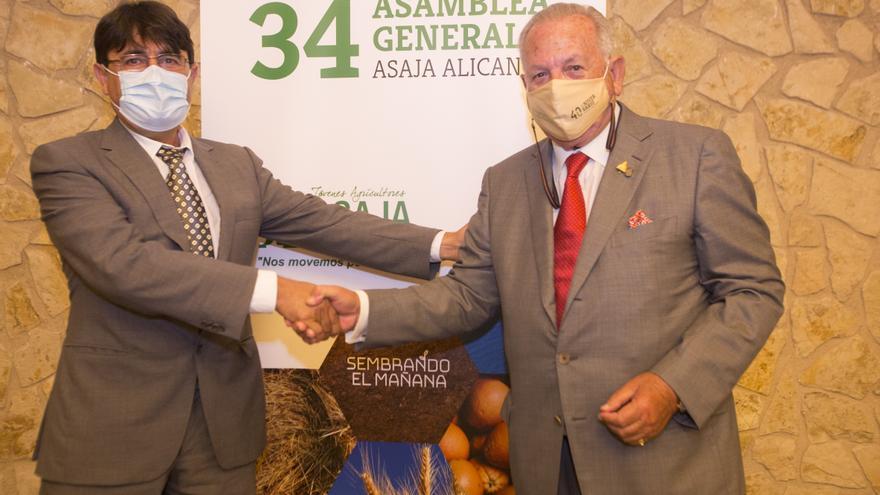 If the province of Alicante has had a figure and undisputed leader in the agricultural and livestock sector during its recent history, that has been Eladio Aniorte, President of Young Farmers ASAJA Alicante, who last Friday said goodbye to the organization that for four decades has led and made it grow, turning it into the entity with greater representation agriculture and livestock in the province of Alicante, which today has more than 8 permanent offices spread throughout the province, 13 local care centers and more than 30 active workers.

That is why the agricultural, political and business sector of Alicante wanted to meet as a bloc to give a affectionate and heartfelt farewell to Eladio Aniorte, in a gala that honored his person and career and in which, in addition, he was designated as Honorary President of ASAJA Alicante, thus maintaining the link with the organization in the coming years. Faced with this fact, Aniorte confessed to being «very excited and to feel very supported by all his companions ».

Prior to the event held on 40th Anniversary of ASAJA and the Tribute to the outgoing president, the organization carried out its internal act, the 34th General Assembly of ASAJA, in which the new president, José Vicente Andreu, a 56-year-old Oriolano, agronomist and agricultural entrepreneur who cultivates 103 hectares of citrus fruits (lemon, orange and mandarin) and 80 of almond trees in Orihuela, all in the form of organic farming, and who will occupy the presidency of the organization for the next four years.

In his first words as president, he stressed that “ASAJA Alicante today is a example of sectoral organization and that his line will be marked by the continuity of a job well done to date. As Eladio says: ASAJA Alicante’s main asset is its affiliates and this is how it will continue to be during my presidency».

Andreu made mention of the imminent challenges on which he will work as the new president of ASAJA, making focus on vital issues for agriculture such as: the price crisis and imbalances in the food chain; foreign trade and border control at ports of entry due to the arrival of productions from third countries; visibility of women in the rural world; digitization of the agricultural sector; promotion of our products of differentiated quality; and as, the water challenge.

Also Read  Wireless technology records everything that happens in the brain

In his speech, José Vicente Andreu dedicated some words to Eladio Aniorte, highlighting from him that he is a person who has made the agriculture of Alicante sound strong. «There is no doubt that we will continue to have the Honorary President, that person with an overwhelming charisma and personality. What has hit the table when it was necessary, but who has also known how to be grateful when it comes to fair to the people who live in the countryside and produce food for others. ASAJA and agriculture we owe you a lot, Eladio, and I would say that the vast majority of us who today have wanted to embrace you think that throughout all these years you have achieved something unique and great: to be a benchmark as an agrarian leader and as a person. It won’t be easy to fill the gap you leave, Eladio ». However, this new stage as the new president of ASAJA Alicante faces it with “great enthusiasm” despite the “challenges and problems facing agriculture today.”

Aniorte is recognized by all the members of the Executive Committee of ASAJA Nacional. PILAR CORTÉS

For his part, the president of National ASAJA, Peter Cheap He reflected on the role that Aniorte has played during his tenure: «If we take a look at the last forty years, we see great actions, meritorious achievements and successes that have paid off. Eladio’s imprint is called ASAJA Alicante. Among his achievements I highlight one, to achieve the unity of the field sector in Alicante. For the new president, I extend my hand to him to work for the agricultural sector. Together we are strong and we carve out the future».

Young Farmers ASAJA Alicante put the final icing on the celebrating its 40th Anniversary, whose motto reads “Sowing tomorrow”, alluding to the moment of change in which the organization finds itself, with its traditional Awards Gala, which this year have completed the 12th Edition and in which the farmers and ranchers, personalities and organizations that during 2020 they fulfilled their role as “Essentials of the pandemic”, actively contributing to the supply of food to the population, the creation and maintenance of hundreds of jobs, the continuous supply so that exports could continue and the promotion of the Primary Sector in the province of Alicante.

«In my farewell to ASAJA I want deeply thank an entire producing sector of the province of Alicante, which has contributed a lot of work and effort to during the harshest moments of the pandemic. Of course, I will continue attending and being of service of all the farmers and ranchers of the province who need me. They can find me in my house and in the garden», Aniorte concluded in an emotional speech.

Godfather of the act last Friday, Pedro Barato has been in charge of delivering a medal of merit for his career to Eladio Aniorte from the organization at the national level.

For Barato it is a privilege to have participated in the tribute celebrated in honor of Eladio Aniorte, whom he considers «a great friend, committed, always in defense of Mediterranean agriculture, garden agriculture, in short, family farming ”, on the occasion of his dismissal after 40 years as president of ASAJA Alicante.

How do you assess the trajectory of Eladio Aniorte during these 40 years?

Very positive. Eladio started from minus zero, his origin as a farmer and a town exported to the rest of the national farmers’ associations. He has been the great actor and protagonist during the 40 years he has been in Alicante. Part of what ASAJA Nacional is we owe to him. Let’s not forget that Eladio was one of the founders of ASAJA, organization from the merger of Young Farmers, CNAG and UFADE.

Where does the future of Mediterranean agriculture lie?

By two fundamental pillars: the recognition of price of food for producers and the Water. Regarding the price, the Government must implement the measures necessary to cover production costs, and that at the same time there is an economic benefit, as a company that we are. As for water, there are significant deficiencies in large hydraulic infrastructures, not only in the Mediterranean area, if not in all of Spain. Where there is water there will be a future.

What are the structural weaknesses that must be overcome to promote Mediterranean agriculture?

No doubt the policy of prices, but also that there are more countries to export and that the generational change takes place, that is, more young people involved in agriculture. We fight against taxes and great obstacles in the exports, as well as the plagues that devastate the fields. Measures are needed but on equal terms.

Where do you think the problem is that the agricultural sector has to constantly face so many obstacles?

We have negotiations in the Common Agricultural Policy 4 years in Brussels, but also the problem is the great neglect of national politics and also at the regional level. We demand faster solutions and with less bureaucracy.

What advice would you give to the new stage faced by ASAJA Alicante and its new president?

We must look back and take as an example the good development that the organization has experienced during all these years. Look at the political decisions taken and, most importantly, take into account the market.

What position does ASAJA Nacional have regarding the problem of the Tajo-Segura transfer?

ASAJA calls for a national hydraulic policy that provides solutions to the lack of resources. We do not want to distribute miseries in the water, a national policy is needed, not be in the constant debate of “transfer yes or transfer no”.