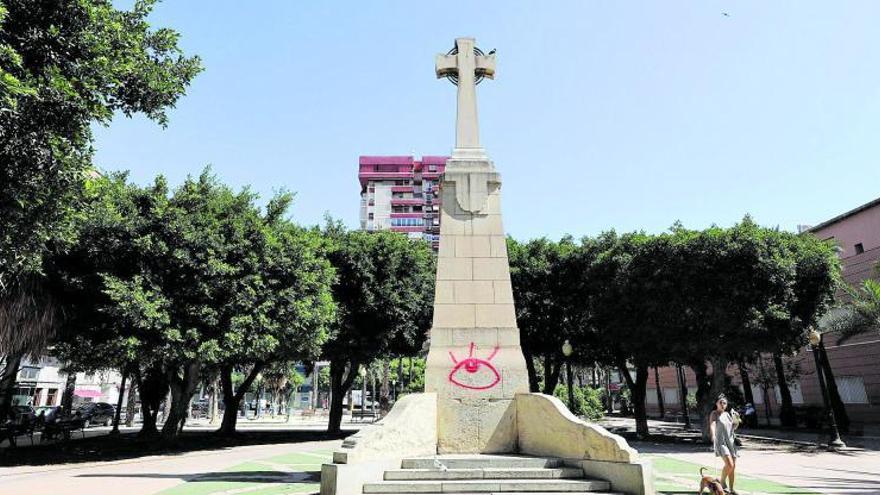 The appearance of the mysterious eyes, colored, with three tabs and some with symbols in the lower part in the urban furniture and facades of buildings and shops for a few weeks is originating bewilderment in the city. The agents consider that they are graffiti artists signed on previous occasions as discarded, according to the mayor of Security, Ramón Abad, and they are also not aware that this type of infraction has occurred in another nearby city.

What seems clear is that It is not one person who is behind this vandalism, but several, and that due to the level that the graffiti has already reached, criminal proceedings will be opened, as indicated by the area councilor.

It always depends on the money it will cost to repair all the damage that is caused. If they cannot be removed by mere cleaning and require a specific treatment or replacement of what you have painted We would be talking about a crime of damage, as indicated by the Urbanity and Environment Unit of the Local Police.

To “hunt” the authors of these eyes, this police department has a calligrapher expert working tirelessly, a specialized team that allows each of the scribbles to be identified and an attribution to be made to each of the graffiti, which is then used to present it to the courts, documentary evidence that allows them to condemn the perpetrators of these mischiefs for all the damages caused.

In addition to this exhaustive analysis of each graffiti stroke, the agents also manage to capture the creators of the graffiti with other avenues of daily work. From following social networks, making identifications in places where this type of young people tend to gather, together with the work carried out by territorial units.

Over the past four years, these agents have filed more than a hundred administrative offenses for this type of incident. Regarding arrests for the crime of damage, there have been more than twenty detainees, sometimes belonging to the local police and at other times in collaboration with other security forces and bodies. The last and most notorious case was the arrest of those already known as the “Renfe graffiti artists”, accused of painting 49 train cars. The arrest, carried out by the National Police, was thanks to the expert work of the agents of the Local Police of Elche.

From this unit, already considered as authentic detectives of graffiti and graffiti, they assure that since they started it, vandalism of this type has decreased. Now, their challenge is to find a “crew” or group that is filling the street with disconcerting eyes that are far from resembling graffiti as such.

Pranks that go out of the usual areas

With symbols or under letters or simple eyes, on street lamps, walls of kiosks, walls of palm trees orchards, buildings, shops, bars … the happy drawings have filled a good part of the center of Elche, but also of the Sector V Y The Plan. The areas most given to graffiti are usually always the entrances to cities and when they appear in the urban area, it is usual for it to be near areas of leisure areas, according to the Local Police. In the case of the eyes it is being different.

Another eye appeared on the facade of a bar, in the center of the city. | ANTONIO AMORÓS