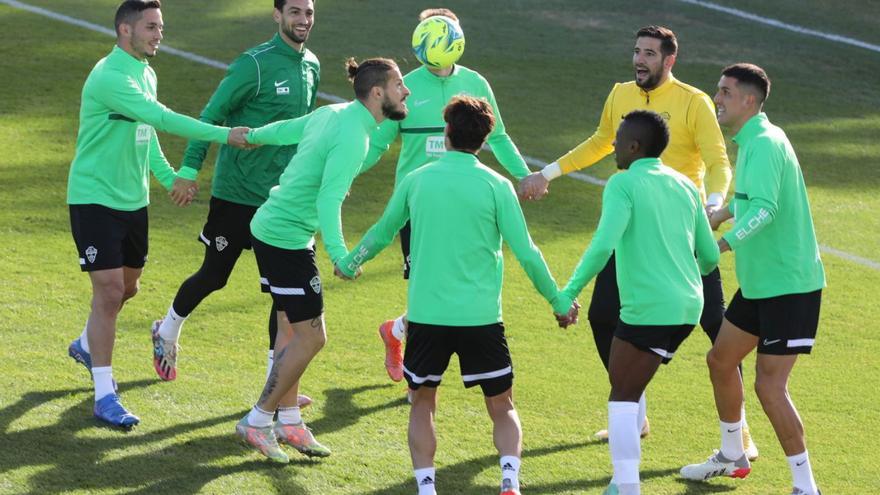 After almost four months of competition and 16 league games, his time has come. The brand new signings made in summer by Elche they must take that leap in quality that is presupposed. And Francisco knows it. The level of demand imposed by the new coaching staff in each session is the same for all. There are no more excuses. No one can say at this time that his incorporation was late or that he had not played soccer for a long time.

In this new framework, although in the middle there has been a change of game director and several system modifications, all the Elche players can feel that there is no longer any stranger among them. Acclimatization has been sufficient and It is the moment that forwards like Lucas Pérez or Darío Benedetto and midfielders like Javier Pastore O Gerard Gumbau, give the chest do.

Along with those already mentioned, this summer they also arrived at the Martínez Valero Omar Mascarell -one of those who has played the most-, as well as the defenses Enzo Roco and Pedro Bigas -Right now injured and probably not back until January.

Objective performance measures do not exist in the world of soccer. But some figures can lead to interpretation. Go ahead, it is usually easier to value the footballer. The goal is the highest expression of the beautiful game and the greatest prize for a team. Marking them is synonymous with outstanding and the two who joined Elche in the summer have scored two goals each. But they haven’t scored in a long time.

Omar Mascarell, second from the right in the race, is one of the reinforcements who has played the most. | ANTONIO AMORÓS

Lucas, from more to less

Lucas Pérez has been in the dry dock for 11 days. It was presented by Elche on September 1. He did not make even half an excuse. He assured to arrive with a lot of desire to score. And so he did. His was the goal of the first victory from Elche, on September 13 against Getafe in Madrid (0-1). On the following day, the former Deportivo Alavés once again pierced the rival’s goal, this time at the 1-1 of Elche-Levante. Four points thanks to the goals of an attacker who has played 857 minutes, which has been a regular at the Escribá eleven and, now, with Francisco, continues to be.

Benedetto, on the other hand, has not played that much -556 minutes- and has done so little recently, so he has not scored for six games. He started on the right foot and started the first days, losing confidence after the Valencian coach, first, and it seems that Francisco too, who did use it all the Cup match but in the clash against Cádiz he took it out for lack of only five minutes. The «Pipa» has scored two goals. The first was against Celta in 1-0 on October 3. The second was at Elche-Espanyol, which ended 2-2. In objective terms, like Lucas Pérez, Benedetto has given the Elche team 4 points.

Among the new ones, Enzo Roco has stood out. He scored the goal of the first franjiverde draw (1-1 against Sevilla, at home). In addition, he has been strong in defense, although in his duty there is also some failure than another that has caused goals against. One of them was against Villarreal, when they stole the ball while driving in their own field. The loss led to 2-1 at La Cerámica. The other was an accident; a slip that ended in both of the Real in Anoeta.

By name, the fans are most waiting for Pastore who, due to muscle discomfort, has missed the last two days. He has already been in the group for two training sessions and could reappear in Valencia, even if it were to play for a minute in the second half. Gumbau is another of the players who are most expected. He has participated, without shine, for 460 minutes. In the midfield who has played the most has been Omar Mascarell (1,007 minutes), who at the beginning created a good tandem with Guti and now he is doing it with Marcone.

Of all of them, both the club and the fans expect more from them. They are the most outstanding reinforcements that Elche has had. It is their hour.

Mojica, doubts in Mestalla due to a muscle problem

Johan Mojica is the franjiverde player who has participated the most in the 16 LaLiga Santander matches played so far. Specifically, it has already added 1,264 minutes. Next on the list is goalkeeper Kiko Casilla, with 1,084 minutes and Enzo Roco with 1,046. In addition, the Colombian has played three games with his national team in recent months. And he has been, without a doubt, one of the players in the competition who has run the most kilometers on the pitch.

The defender from Elche could now be paying for the extra effort made. In fact, he suffers from a muscle problem and the club’s doctors decided yesterday to give him a break from group training, despite the fact that the level of physical demand was rather low.

Mojica, according to Elche sources, exercised alone in the gym. The franjiverde has undergone medical tests that will determine the extent of his injury. This annoyance makes him a serious doubt to participate this Saturday. A worrying loss for Francisco, who also does not have his natural substitute, Josema Sánchez. At least, the one from Lorquí is not in his best physical moment as he has just rejoined the group after a muscle injury. It is likely that he will not even travel to Valencia. In the absence of left-handers, Barragán could once again have prominence, with a changed leg, as against Leioa and in previous appointments.