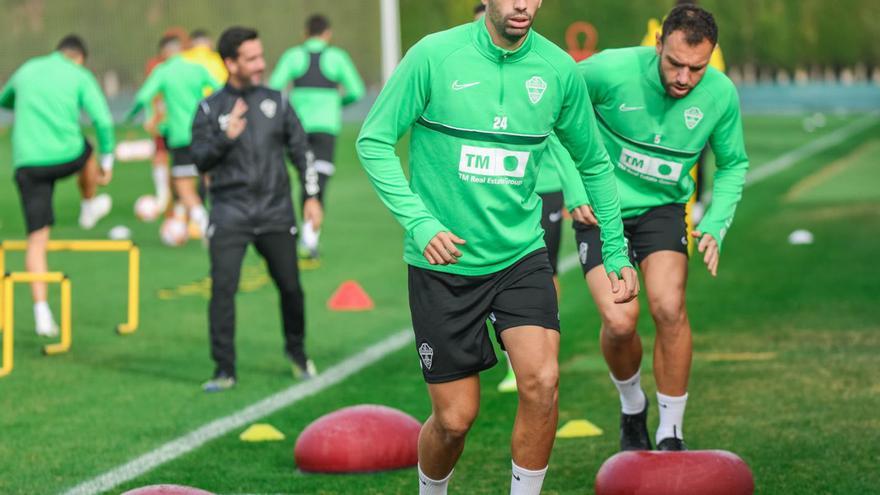 Avoid the blush of being one of the First Division teams eliminated by an inferior rival. That is the mission that Elche has tonight (9 pm) in its match of the second round of the Copa del Rey, which will face the Unionistas de Salamanca of 1st RFEF.

The franjiverdes will have in front of a team that wants to be the protagonist of the machado and that will try to take advantage of the field factor. The artificial grass pitch favors the charro team. But the team from Elche travels mentally so as not to be surprised and demonstrate the highest quality of its squad.

Francisco will once again use the less common players in the League, as he did in his debut as Elche coach in the first tie against Leoia (0-2). The Almeria coach will give footballers the opportunity to vindicate themselves and show that they can also play in the league competition.

“El Pipa” Benedetto, who was one of those called to be in the starting eleven, does not travel due to muscular discomfort that he has been dragging throughout the week. The same happens with Tete Morente, who also does not enter the call. The franjiverde coach prefers that they stay in Elche’s lands so that he can recover well for the League match on Saturday at the Camp Nou against Barcelona.

Also low are Pedro Bigas and Mojica, who continue to be injured. Francisco confirmed yesterday that the Mallorcan center-back will have to wait for the first game of 2022, which will be played on January 2, at the Martínez Valero, against Granada, to be available.

Mojica, who missed last Saturday’s clash against Valencia, continues with his recovery plan and is expected to be recovered to travel to Barcelona on Friday.

Lucas Boyé has had some discomfort this week and on Monday he did not train with the group. However, the coach said yesterday that he will be in the call for tonight’s match, because “he is a very committed player to the team, the club and the city.” Despite this, the Argentine forward will initially be on the bench and will only play if during the game the result is not as expected.

The same will happen with other starting footballers in the League such as Omar Mascarell or Lucas Pérez.

The three goalkeepers also travel to Salamanca this morning, but Francisco made it clear yesterday that Kiko Casilla will be the starter, as it happened against Leoia. Regarding the possibility of Axel Werner playing, he said that he is a goalkeeper who knows from his time at Huesca, who trains very well and makes it difficult for him, but that, for now, Casilla is going to be the goal of the Copa del Rey.

Those who will be in the starting eleven are Pastore and Josema. «They will play at the start. We want them to add minutes, because we need them. They are training very well and although it will be an artificial grass pitch to which we are not accustomed, as the game goes on we will see how much we can endure them, ”the Almeria coach commented yesterday.

Francisco pointed out that the homegrown players Jony Álamo and John will have minutes. He did not even rule out that a player from the subsidiary, such as Bono or Diego Bri, would enter the call, which will not be made public until this morning before traveling to Salamanca.

With these parameters, the possible starting team would be the one formed by Kiko Casilla in goal. On the right side, Barragán could enter, who in Mestalla played on the left, out of necessity, in the absence of Mojica and Josema. In the center of the defense, Gonzalo Verdú, who is not counting in the league, has one position assured and the other will depend on whether he chooses to reserve Enzo Roco and Diego González for the Camp Nou. If that were the case, the youth squad would start John, with Josema in the left lane. Francisco ruled out yesterday the possibility of playing with three centrals.

In the center of the field, the pivot pair also seems clear, with Gumbau and Raúl Guti. The Zaragoza native is unprecedented in the League with the new coach and must show that he can regain his position and his best level.

Pastore will act as playmaker, which is the position he likes the most, behind Guido Carrillo, with Piatti and Pere Milla on the wings. Josan is another of those who could start, but the crevillentino had a great performance in Mestalla, where the dynamics of the game changed after his entry and, together with the annoyances of Tete Morente, he has many possibilities of being a starter on Saturday in Barcelona.

Unionistas de Salamanca is a club founded by former members of the historic UD Salamanca after its disappearance in 2013. It is democratically managed by its own fans, through a maxim: one member, one vote. They are the ones who have decided the name, the shirt, the shield. The Salamanca team is one of the standard bearers of the so-called «popular football». He plays his games on the Reina Sofía Municipal field, made of artificial grass and measuring 165×67. It only had one stand and in recent years it has been renovated. The lighting is quite poor and some small turrets have been incorporated to gain luminosity. Tonight, with the fog that is expected to fall over Salamanca at game time, visibility will be poor. The Unionistas de Salamanca militates in group I of 1st RFEF. He occupies the seventh position after five victories, ten draws and only one defeat, which occurred in the dispatches, due to improper alignment against DUX, against whom he played with 12 players for 45 seconds, due to an error in a triple substitution. He started the League like a shot, he was the leader, but accumulates nine consecutive draws in the last days.