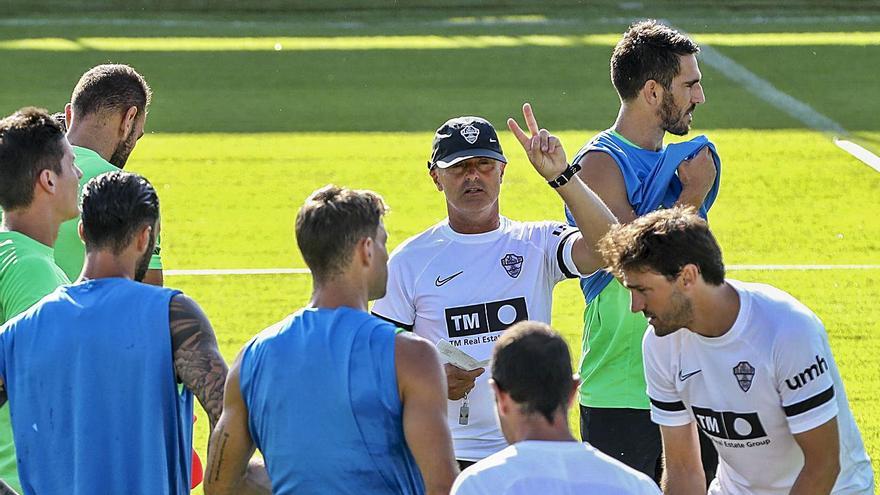 The Elche coach is managing to put into practice his philosophy of play, based on strength in defense and, from there, grow. The first results corroborate this. Five points and tenths. In addition, in four LaLiga Santander matches, the team from Elche has only conceded two goals, keeping their clean sheet twice and basing their growth on the front line of play.

Elche grows from defense and, except against Sevilla, the other three rivals (Athletic de Bilbao, Atlético de Madrid and Getafe) have been unable to generate too many scoring chances – only 13 balls between the three sticks-. The Basques finished only three times on goal, four times the colchoneros, 5 the Sevillians and one of Míchel. It is also true that the French-green have not made it easy either. In fact, he has only scored two goals in his four games and has finished on goal only 11 times, two in each of the first two games, four against Lopetegui’s and three against Getafe. But the final result is translated into figures that allow Elche to dream, at least, of not suffering like last season.

The arrival of Fran Escribá after the poor results of the Almirón project, in February of this year, served to offer the team an order and balance that have been reinforced in the new year. Not only with more experience and rehearsal, but also with players who have come to increase competitiveness in the squad and to soak up the philosophy of the game that the coach transmits. The footballer who arrives at Elche has to study “the Escribá defense”, an opening match that is based on being very strong in defense so that the team gains sufficient confidence to achieve a positive result.

Except for the defeat due to an accidental failure of Kiko Casilla against the current league champion, Elche has achieved two important draws so far, against two First-class bones such as Athletic and Sevilla, and a victory, that of last Monday against Getafe. In this last game it is where it was best possible to see what this chess opening of the Valencian coach consists of. The franjiverde team drowned the Madrilenians, who were unable to generate chances for almost the entire match. In fact, they only had one, a corner shot at the end of the match, which had a great response from the veteran goalkeeper. Kiko Casilla pulled out a providential hand to save two points, add two games with a clean sheet. In general, he had very little work. Nor has he had it in the rest of the stakes.

In the last meeting, it was also possible to see that Escribá has more options and resources that have arrived this summer. In addition, the wardrobe that comes out from the bench is of another level. The coach has mainly opted to play with five defenders – three centrals and two wingers -, three midfielders and two forwards. Only in the match against Sevilla, the coach used the 4-4-2 during the second half.

One of the new resources, forward Lucas Pérez, scored the goal against Getafe. And another that stood out was the work of Omar Mascarell in the center of the field, largely liberating Raúl Guti, who had not felt so accompanied for a long time.

At this point, it is worth remembering one of Escribá’s first press conferences as Elche coach, delivered before his first clash against Eibar. His idea was key in the salvation of last season and it should also be so so that this year the goal can be achieved in a more comfortable way. I hope things are noticed. We have tried to give the team order and balance. Two fundamental attributes to get checkmate or a draw. They both add up.

The Argentine forward of Elche Lucas Boyé did not exercise yesterday with his teammates at the Martínez Valero stadium due to physical problems and it is very difficult to participate against Levante, as this newspaper announced yesterday, as he continues with his discomfort in an adductor, which already They prevented him from performing at a good level in the matches against Sevilla and Getafe. The central Pedro Bigas will not be in Elche either – two months off. On the other hand, Levante recovers its defender Rober Pier, who is already training normally after overcoming a slight muscular overload, according to sources from the Valencian club, and coach Paco López already has the five center-backs of the first squad. With the presence of Pier and after Sergio Postigo already played a few minutes last week after overcoming a knee sprain, the Valencians will have to discard two centrals to make the starting eleven. Vezo and Duarte complete the list of power plants to which the German Shkodran Mustafi joined, with the market closed, who during his presentation held last Wednesday admitted that he is “almost ready” to debut.