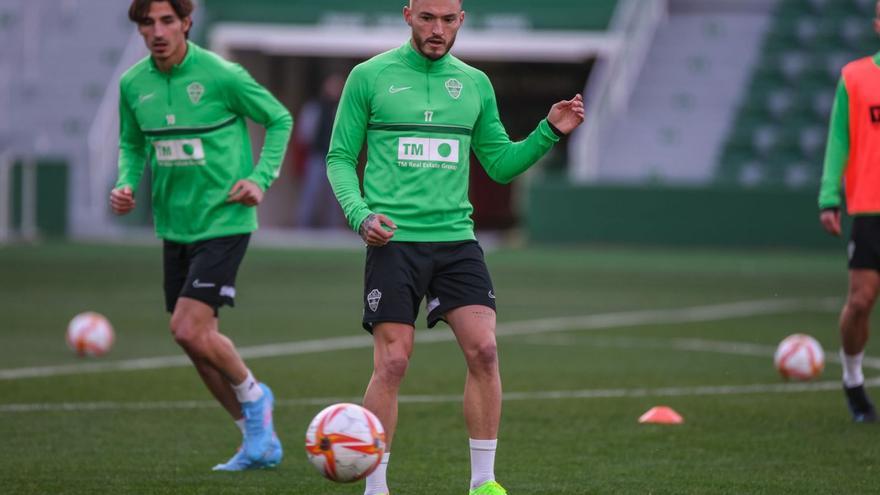 Elche has this afternoon (7:00 p.m.), at the Martínez Valero stadium, a historic opportunity to reach the quarterfinals of the Cup, something they have not achieved since 1969 when they reached the final, which they lost by the minimum against Athletic Club of Bilbao.

The franjiverdes have enough reasons to believe. They are in the best moment of the season and the last two victories in the League have placed them five points away from the relegation places, which allows them to bet on the cup tournament. Even more so considering that on Sunday they visit the Santiago Bernabeu in the league competition and then there will be a 15-day break for the national team matches.

Despite the numerous absences due to covid, Mascarell and Barragán joined yesterday, and injuries, Francisco, who will not be able to lead his team from the bench due to being confined due to positive, will present an eleven that will be very similar to the one he played last Sunday in the league against Villarreal. The franjiverde coach and his assistant, José Manuel Rodríguez Ortega, who will be the one to give the instructions at the foot of the field, have already announced that they will risk and that they will line up the best available footballers.

Josema, Pastore, Kiko Casilla, Piatti, Mascarell and Barragán are out due to covid. Roco and Marcone have muscular discomfort and it will be very difficult for them to get into the squad list, while Pedro Bigas is injured and will not return until after the break.

Fidel and Helibelton Palacios, who could not play against Villarreal after having tested positive a few days before, are now ready.

With these wickers, Elche will present a recognizable starting eleven. With the doubt of whether Axel Werner will be in goal or keep Edgar Badia, who is the starter in the League; In defence, Gonzalo Verdú and Diego González are the only two central defenders available and will form the backbone. Josema is low, so Mojica will continue on the left side. Helibelton Palacios will replace Barragán on the right side.

In the center of the field, in the absence of Mascarell, Raúl Guti will enter as a place in the double pivot of Gumbau.

For the bands, the franjiverde technician has, except for last minute surprises, to choose from. Tete Morente and Pere Milla have been confirmed as starters in the League and there are alternatives for Josan, on the right; and Fidel, on the left.

Up front, everything will depend on the sensations that Lucas Boyé has, although, in principle, he is not expected to take risks. If he is seen to play a few minutes, he would be on the bench in case it was necessary throughout the match, as happened last Sunday when he came out and scored the winning goal against Villarreal. But the initial intention is to reserve it to avoid a breakage and the injury to get worse. In that case, Guido Carrillo and Lucas Pérez would form the offensive duo. Although there is also the possibility that Fidel plays on the left wing and Pere Milla acts as a striker accompanying the Argentine or Galician.

Real Madrid also has numerous casualties, some of them sensitive and important players. The goalkeeper Thibout Courtois has not entered the call due to a last minute illness and the Ukrainian Lunin will be the starter. Ancelotti has rested Benzema, who ended up tired and with shoulder discomfort in the Super Cup. Militao misses the match due to suspension due to his sending off in the Saudi Arabia final on penalty against Athletic Club de Bilbao. Marco Asensio suffers a ruptured rectum, Carvajal is isolated due to a positive covid, while Mariano and Vallejo have been in the dry dock for several weeks.

The main novelty in the Madrid squad is the return of Welshman Gareth Bale, who has not played since August.

Ancelotti announced yesterday that he will also put a recognizable eleven in the running because he wants to go for the Cup.

With Lunin in goal, Lucas Vázquez will continue on the right side, Nacho and Alaba will be in the center of defense and on the left side the question lies in whether the Frenchman Mendy will continue or Marcelo will play initially.

In the center of the field is where the Madrid coach has the most alternatives and everything will depend on whether he gives rest to any of the starters: Casemiro, Modric and Kroos. The Croatian is the one who has the most ballots to rest and Valverde and Camavinga are waiting for an opportunity.

For the attack, with the absence of Benzema, Jovic and Hazard, unprecedented in the Super Cup, they aim to have minutes. One of the two will enter the starting eleven, in which the young Brazilians Vinicius and Rodrygo seem fixed to seek their speed on the counterattack.

What is clear is that both teams want to go through the tie. Real Madrid to continue their great season, in which they are leaders in the League and have won the Super Cup, and Elche to make history and dream of reaching a cup final again. Emotion is guaranteed this afternoon at the Martínez Valero.