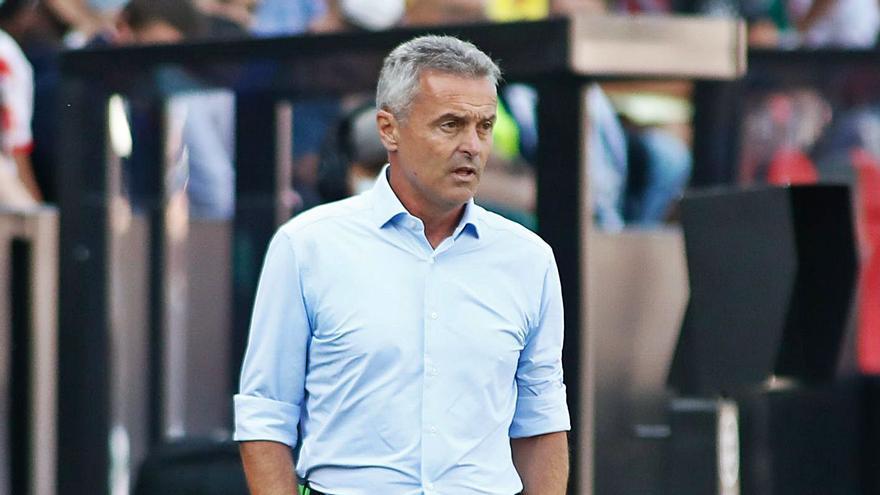 Most of them focus on the line-up and the low capacity, both of the team and the coach, when it comes to knowing how to read the game and not taking advantage of having been ahead on the scoreboard. Something that is the most difficult and essential in football.

The main virtues of the Valencian coach’s teams in his successful career in the Elche team have been the balance and defensive order that they have always shown. And the few criticisms, because the results supported him, had derived from his lack of courage at certain times.

Elche de Escribá is missing its own identity. The franjiverde coach has sinned in many moments of over-conditioning the line-ups depending on the opponent’s game and the characteristics of the fields where he plays.

The virtues, which are many, that the Valencian coach has shown have been very good in teams with limited squads and that only fight for permanence, as has been in his previous three experiences in the First Division with the Elche team. But this campaign, as Escribá himself acknowledged, has the highest quality squad he has ever had in Elche and we have to demand more.

Too much muscle and little creation in midfield

When it seemed that he was finding an eleven type, in the starting team last Sunday in Vallecas there were up to six changes, more than half a team, with respect to the one that won the previous day at Celta. It is true that the line-up could be conditioned by the special circumstances of internationals Mojica and Enzo Roco, who arrived just before the game. But the bet on Gerard Gumbau instead of Raúl Guti was a bit strange. The Zaragoza native has become an essential footballer since he arrived at Martínez Valero, he has played everything and there is no other footballer of his characteristics in the squad. The franjiverde coach argued at the end of the meeting that they were at the same level and it is not true. Although the Catalan can offer a good performance and contribute things, right now he is not at the level of Guti. Escribá opted for Gumbau to gain muscle and height in the center of the field and the Elche team lost football.

Then he said that Josema had to play yes or yes. It is also debatable, because Mojica arrived on Friday afternoon and despite the fatigue he could have started. In fact, he played the last quarter of an hour of the game.

On the right side he justified that he put Helibelton Palacios because Barragán would have had a harder time stopping Álvaro García. The problem on the right wing was the little help that Piatti’s Colombian had. If you think that, maybe it would have been better to put Josan as a right winger, who is more used to helping the winger. In fact, he has played many games as a winger. The Argentine can give more control and possession of the ball, but if you do not have anyone in the construction in the center of the field, it is clear that the game is going to be a round trip.

Elche does not have a defined game system either. Due to the good result that the bet on the three centrals had given him in the last two games of last season, which allowed them to remain, Escribá decided to keep it at the beginning of this season. However, in the last four games he has returned to 1-4-4-2, which is his fetish scheme.

It is good to have alternatives and to be able to play in different ways, but it would still be more profitable to have your own model and game system and change small nuances in a timely manner, especially in matches against large teams that play with many forwards and that you are obliged to do. to defend and go more against.

The Valencian coach, practically, has not repeated an alignment. That of meritocracy can serve at certain times to have the entire squad to the fullest and happy because all footballers enjoy minutes. But its excess may not satisfy either some or others.

In attack, Escribá has a lot to choose from. The Elche coach likes to play with two born forwards and that is always appreciated. But if balls do not reach him and they are only from balls or having to generate the attack plays, they will hardly be inside the area. In the final stretch of the game in Vallecas, he looked for the alternative of Lucas Pérez on the far left. However, that led to two tall forwards like Lucas Boye and Guido Carrillo. The idea of ​​looking for lateral centers was not bad. But if you put two points of these characteristics, unconsciously, as happened, you tend to put long balls into the area. Escribá criticized that, but in large part it was generated by his changes. Also, of not giving the opportunity to a player like Pastore, who could help carry the ball to the area.