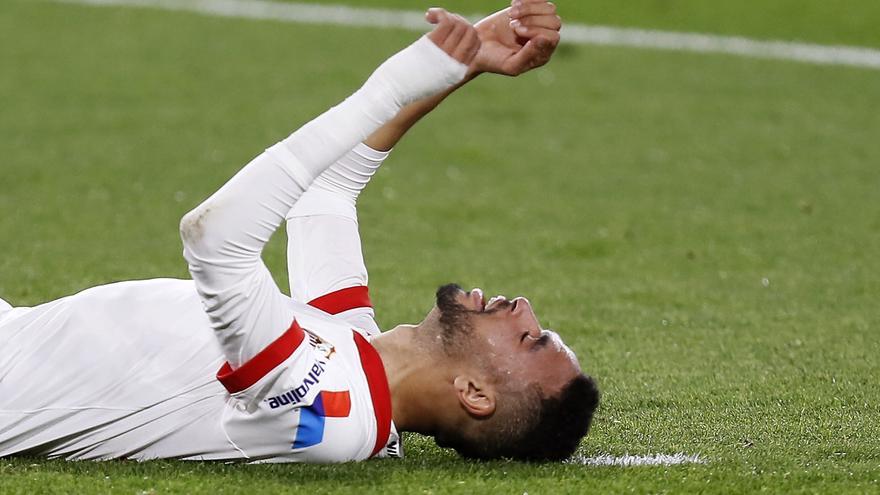 Again the quality decided. Escribá faced the shock without reservation. He put an eleven similar to the one he had been playing in the last games with three variations. The surprise was on the right side, where he made his debut for Helibelton Palacos as a substitute for the injured Barragán. Everything pointed to Cifu playing, but the Colombian was finally chosen and he responded well, with a correct match despite the fact that it was his premiere and he had not competed since November. On the left side he opted for Josema instead of Mojica. The Murcian fulfilled perfectly in the clash against the Sevillans ten days ago and repeated in the starting team.

The third variation occurred at the extreme right, where the green-and-green coach tried to take advantage of Josan’s speed and succeeded in the first half. Elche came out very orderly, applying their classic 1-4-4-2 that drowned Sevilla. Lopetegui’s team, which on this occasion opted for more touchy footballers, found no gaps in the well-coordinated spider web that Fran Escribá had designed on the blackboard. The first half had a leisurely pace and the two teams looked for the right moment to strike. The people of Seville played with three backs looking for depth in the bands of Jesús Navas and Acuña. A situation that Josan took advantage of to hurt the far right by having spaces with the Argentine’s rises. Precisely, Elche’s first chance came that way. The crevillentino put a good cross at the far post and Guido Carrillo finished off with a header brushing the post. The franjiverdes made a medium pressure up and fell back on their land when the Andalusians controlled the center of the field. The good approach of Escribá paid off and the defense from Elche lived quite comfortable.

Given the lack of space, Suso tried his luck from afar and his shot went wide. Carrillo also tried it with a long shot without consequences. Controversial play The first half went through with hardly any alterations until the controversial play of the game arrived. Josema came in with force, but took the ball away from the Sevilla winger. After some hesitation, the referee called a foul on the three-quarter line. And as a result of that action came the first goal. Sevilla served short, Suso put a great ball to the heart of the area and En Nesyri rose masterfully, hooked a header, Edgar Badia brushed the ball, but could not prevent the ball from sneaking into the bottom of the goal (1 -0). The break was reached with a totally unfair result for the merits of both teams. That goal changed the dynamics of the match. Elche was no longer worth just defending and waiting for some against. That caused the second half to be more dynamic and with more alternatives.

The Andalusians came out with force to try to sentence. And they could do it. But Edgar Badia was there to support the French-Green. First he got a good hand shot from Óscar Rodríguez. Then, En Nesyri finished off with a header and the ball went brushing the post and the Elche goalkeeper aborted a heads-up with Rakitic. They were the worst moments of the Elche team. Elche was trying to reach the top, but with more will than success. Gudelj tipped off a ball from Lucas Boyé when the Argentine was left alone in the small area. The party went into an exchange of blows. In Nesyri he touched the goal again with another header and Raúl Guti, entering from the second row, had a shot from the front that came out centered and was stopped by Bono. Escribá tried to refresh the team upstairs by entering Pere Milla and Tete Morente, but neither of them had much participation. Shortly after, Piatti made his debut, who entered for Fidel on the left wing, and Mojica replaced Josema to try to have more arrival from the left-handed side. The Argentine had a pitch on the first ball he touched. It came out loose.

Elche was a want and I can not, although he was still involved in the game and a goal gave him the prize of a draw. Boyé had a shot that Bono stopped. The excitement and tension was palpable in the last minutes. In the twilight of the match, Lopetegui made mobility with Papu Gómez, De Jong and Franco “El Mudo” Vázquez. On the Elche side, Víctor was the last trick for a tired Raúl Guti. And in 89 all the French-green illusions were over. Oliver Torres put a ball into the area and Vázquez took a high heel shot out of his hat that surprised Edgar Badia and that was the end of the match. The 2-0 was already final and the Sevilla fans breathed before the resignation of the franjiverdes. Eleven finals ahead Elche let the extra ball escape and an opportunity that their rivals did not have due to relegation. But Fran Escribá’s team has already overcome the “Tourmalet” that was ahead against Barcelona, ​​Real Madrid and Sevilla on two occasions. The people of Elche are still out of the relegation places, with a margin point and now they have the last eleven games of the championship ahead of them, with many confrontations against direct rivals. There will be eleven finals to reach permanence. The good news, in addition to the qualifying situation, is that the franjiverdes have given the stature and have put the greats on the ropes. The good feelings of the team are the main reason for harboring illusions to achieve the goal.