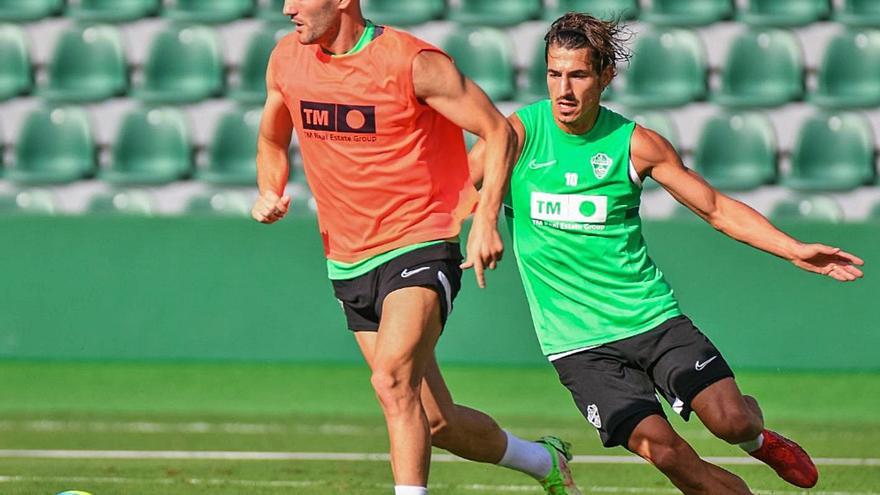 For dreaming, the European positions are within reach -Athletic has 8 points and is fifth-. Going down to the grass, today’s match (6:30 pm) against Levante will be a very tough regional derby, in which the franjiverdes must take advantage of their positive inertia (0-1 against Getafe last Monday).

Day number 5 of LaLiga Santander. Those of Escribá would have signed for arriving like this after the complex start of the season expected (Athletic Club, Atlético de Madrid, Sevilla). Elche has 5 points, they have only lost one game of four and did it by accident against the leader and current champion. And he has only conceded two goals, keeping his clean sheet twice.

In favor, in addition to the positive start, the order shown on the field of play is added. The Elche of «La defense Escribá» is articulated from the fortress behind. The 5-3-2 game system, with three centrals and two lanes, is a very difficult lock for rivals to open – only 13 shots have reached Kiko Casilla’s goal. The reinforcements also improve the center of the field and the forward, which also feels safer to go up with the ball before the good work in defense.

The record of results against Levante also fuels optimism. In total, between the First and Second Division, 23 Elche-Levante have been played, with ten local victories, five defeats and eight draws. In First, franjiverdes and big men have met five times in the city of palms, with three victories from Elche and two draws.

Against, mainly two issues. First, this season Elche has only scored twice. And he has not enjoyed numerous scoring chances either. In total he has executed 27 shots. Of them, only 11 between the three suits. Second, Pedro Bigas has two months to recover from his injury and Lucas Boyé continues with adductor discomfort and will not play, as confirmed yesterday by the franjiverde coach, who also regretted the loss of Jony Álamo.

Thus, Fran Escribá will have to make changes to his starting eleven. Enzo Roco will enter the defensive base of the team by the injured Pedro Bigas. Natural change that already occurred in the game against Getafe when the Palma player suffered a partial tear in the external lateral ligament of his right knee. This line could also undergo another modification with the entry of Josan Ferrández to the detriment of Helibelton Palacios on the right. The Colombian did well in the last match, but Escribá has been using the most attacking mordant of the crevillentino in the home games. Diego González and Gonzalo Verdú -noticed by already having 4 yellows-, would complete the list of centrals. Johan Mojica, immeasurable in the past day, will undoubtedly occupy the left wing as a lane.

Elche’s midfield could be the same. Fidel Chaves on the left and Raúl Guti on the right. In the middle of the field, the newcomer Omar Mascarell, who against Míchel’s men showed good form and manners, serving as great support to his teammates in the middle.

Ahead, the Valencian coach could use Lucas Pérez alongside Darío “El Pipa” Benedetto. The goal of the last victory raises the Coruña. Two other forwards, Guido Carrillo and Pere Milla, could come off the bench. There luxury reinforcements would remain, such as Pablo Piatti, Gerard Gumbau, Edgar Badia, Morente, Barragán, Josema, Marcone and the last signing, el crack Shepherd that, as the coach commented at a press conference yesterday, “is now ready to play” and could make his debut in front of his fans by playing a few minutes in the second half.

For its part, the Levante of Paco López will not be able to count on the injured Bardhi, Soldado, Jorge de Frutos and Campaña. Álex Blesa and Shkodran Mustafi could arrive, while Pier is already recovered. In eleven, several doubts. Duarte and Postigo are fighting for a position, like Radoja and Malsa, as Pablo Martínez seems to take hold. And above, in addition to Morales and Roger, the Granota coach could bet on Cantero or Dani García. The Valencian team needs a victory. Elche wants to add his second win. The fight will be intense and, surely, spectacular.

Elche yesterday went on sale tickets for fans in general for the game against Levante. The seats can be obtained through the official website www.elchecf.es, providing the details of the attendee, since they will be nominative. The sale will be available until the start of the meeting or until the allowed capacity is completed. The sale will be individually (no more than one ticket can be purchased in the same purchase) and it will be allowed to select the seat to occupy. Online sale is the only ticket purchase method available for this match, as there will be no physical sale at the box office.

According to the official information of the club, the price of the tickets will be between 30 euros for the Preference ring and 15 euros for the South Fund ring. The price does not include management fees.

Also Read  Leisure, culture and gastronomy for the remodeling of the Elche Market: this is the project