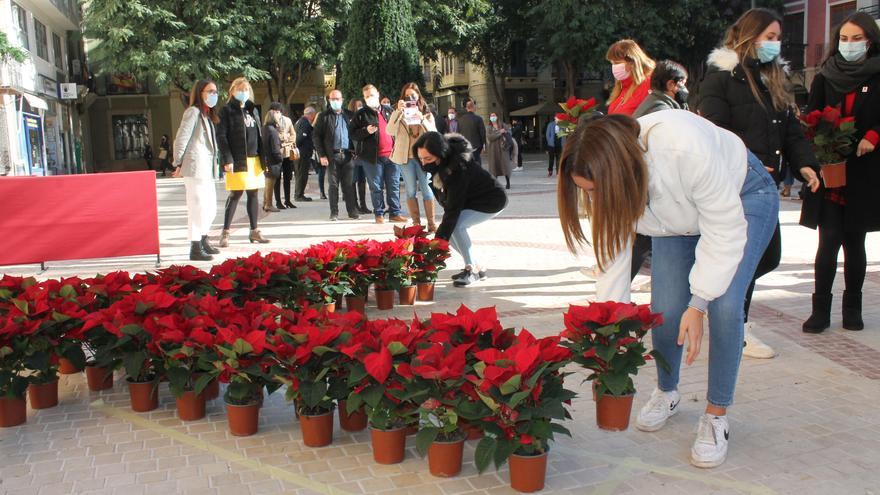 Elche commemorates the World AIDS Day with the reading of a manifesto in Plaça de Baix calling for an end to this disease and the inequalities and pandemics derived from it, since according to UNAIDS data from 2020, 37.7 million people in the world are infected with the HIV virus, according to a figure provided by the City Council.

The institutional act this Wednesday at noon has brought together members of the Municipal Corporation, students and teachers of middle and higher level training cycles of the health branch with degrees in the city, as well as the director of Public Health, Antonia Serrano; the managers of the health areas of the General Hospital and Vinalopó, Carlos Gosálvez and Rafael Carrasco –respectively–; the president of the College of Nursing, Monserrat Angulo; and the special delegate of the Red Cross in Elche, Antonio Ramón Guilabert, among others.

Students from the Lope de Vega Vocational Training Center have read the manifesto expressly calling for “collective action and increasing solidarity in order to end the AIDS epidemic by 2030”.

Likewise, it has been urged “Combat stigma and eliminate discriminatory laws, policies and practices”Towards the affected people, as well as“ desmantle financial barriers to healthcare and increase vital public services to achieve Universal Health Coverage for all people everywhere, with guaranteed equal access to HIV prevention, testing, treatment and care, including vaccines and services related to COVID-19.

The mayor of Health, Mariola Galiana, accompanied by councilors María José Martínez, Mariano Valera and Felip Sànchez, state that at the municipal level they join the commemoration of the “urgent need to end the inequalities that continue to exist in many parts of the world before AIDS as before other pandemics ”. Likewise, Galiana has stressed that the importance of using condoms to avoid infections will continue to be made visible.

He regrets, in turn, that “young people have lost their fear of contagion, which has led to an international increase in cases of HIV and other sexual diseases,” according to experts.

In addition to the manifest, A commemorative banner for the anniversary has been displayed on the frontispiece of the Town Hall. And those attending the event have been able to form, with poinsettias, the red ribbon that since 1991 symbolizes this World Day.