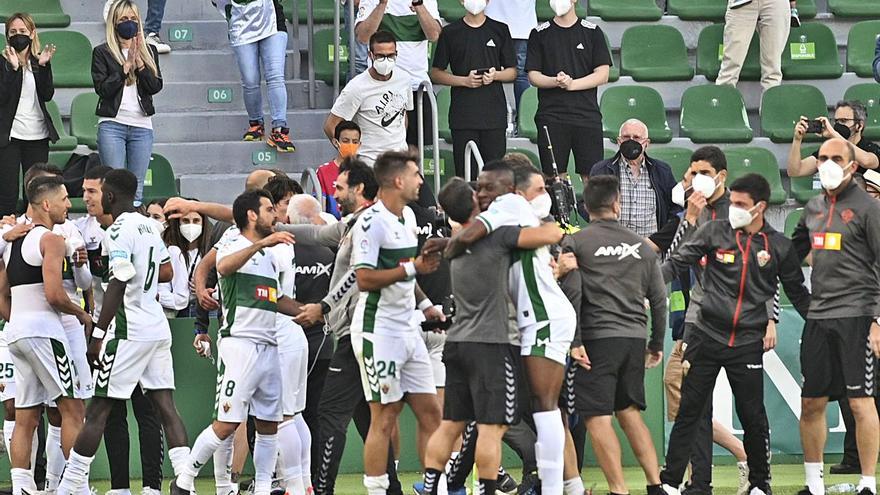 Once they collect the June payroll, players, coaching staff and employees of the franjiverde entity will be up to date in their collections, although there would be a important pending payment such as the bonus for permanence, which amounts to three million, 2.5 to be distributed between the staff and assistants and 500,000 euros for the components of the coaching staff. That is the agreement reached by the maximum shareholder, Christian Bragarnik, with the captains and the coach Fran Scribe a few months ago.

The Argentine investor wanted to motivate the players with this award and the Valencian coach and his assistants also promised him extra money if they managed to leave the team in the First Division.

The payment deadlines have been set one for the month of September and the other for November. In principle, if no problem arises, before the end of the year, unlike last season with the promotion premium, it will be liquidated.

We remember that the extra prize for going up to the First Division was six million and the club, in order to have liquidity at the beginning of the previous season, reached an agreement with the players to pay them, also in two installments, together with the payrolls of February and April of the following season. Finally it was paid, one at the beginning of March and another at the beginning of May, just a few days after the established dates.

In this way, Elche had liquidity for the first months of the season, since the collection of television rights, which amounted to 42 million, has been received on a monthly basis. The bonus money for the promotion was contemplated in the budget for the 2020-2021 season, as well as the salary limit of the League.

The franjiverde entity is complying with its payments and all its employees are up to date, in the absence of June, which it plans to pay throughout this week.

The club from Elche, as Bragarnik himself recognized, in his first and only press conference, is going to end the year with benefits, which could be around two or three million euros.

In this way, you will have sufficient liquidity to be able to face the payment of the permanence premium without hardly suffering the budget for the next season.

In addition, the fact of being able to pay the extra prize for obtaining salvation before the end of the year can also influence the new salary limit and the club from Elche could have more money for the preparation of the squad. LaLiga has established parameters and coefficients with the history of the last campaigns and, although a part of those three million will be included, another may be left out, unlike last year in which the six million of the premium were included of the ascent.

Elche is waiting to know the money that the Clubs Employer allows it to spend for next season. Last season it had an initial salary limit of 34.6 million, which after the January correction, when it was already verified that the income would not be met due to not being able to go to the stadiums, remained at 32.2.

For this next year it will be slightly higher and could be around 36-38 million. The increase will also be influenced by what the Elche club can collect in the season ticket campaign. In principle, it is expected that by the beginning of the new season there may be 70% of the public in the stadiums. The Martínez Valero, with a capacity for about 34,000 fans, could gather between 15 and 20,000 spectators, as the president of the Franco-green entity, Joaquín Buitrago, recognized last week.

The accounts of the new campaign are still open, but as this newspaper announced, the general budget will exceed 50 million and the salary limit will be close to 40. And the fact is that Elche is healthy and that is a point in its favor.

Guillem Galmés leaves the entity and goes to Valladolid with Pacheta

Guillem Galmés, who has worked as scouting and analyst for Elche for the last seven years, announced yesterday that he is leaving the club from Elche and thanked through a farewell letter all the support and affection received during this stage that he has been in the entity franjiverde. The Mallorcan, as Cope Elche advanced, goes to Valladolid to be part of the Pacheta coaching staff, with whom he coincided at Elche, and where he will meet again with Chema Monzón, second coach, and with Jorge Trigueros, who were also his teammates in the Elche club. Although at the press conference for the presentation of his renewal, Fran Escribá announced that the same coaching staff that had finished the previous one would continue next season, for now, there have already been two casualties. Jesús Muñoz left first, serving as assistant coach with Almirón and as assistant with Escribá. And now the analyst Guillem Galmés is doing it. The Valencian coach came with his trusted assistants: David Generelo (second coach), Miguel Villagrasa (physical trainer) and David Martínez (analyst). They were joined by those who were in the club, in addition to Muñoz and Galmés, Miguel Escalona, ​​goalkeeper coach, and Manolo Sempere and Fidel Agudo, assistant coach. In principle, these last four are going to continue the next campaign.