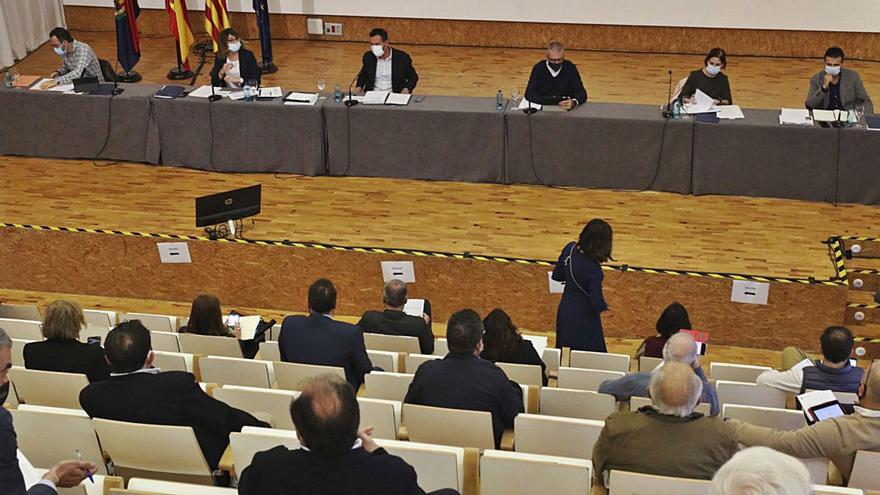 The City Council of Elche will have in 2021 a budget of 239.101,44 euros, that falls five million with respect to the accounts of this year; from them, 39.5 million euros go to public companies: Visit Elche (2.1 million), Pimesa (11.1 million), Espais Verds (1 million), and Aigües d’Elx (30.1 million euros), while the rest ( 199.6 million) to direct municipal management, which is what is considered a consolidated budget. And this is the most important chapter because, despite the fact that for 2021 a drop in direct and indirect income of more than 4 million is expected, which are those that come through the collection of taxes such as the IBI, the IAE, or the terrace rate, the final account will be positive, due to an increase in the money that the City Council will receive to finance the Edusi and the Edificant Plan projects, which come from the European Union and the Generalitat Valenciana. These contributions are accounted for as income in the municipal budgets when they are considered grants.

The City Council of Elche will also have more money in the consolidated budget for current expenses, because during this year six loans have been amortized with the banks, which reduces financial expenses and allows the council to have more cash that is allocated to current expenditure, as explained by the mayor of the Treasury, Patricia Macià before the social council. In it, the mayor of Elche, Carlos González, along with other members of the corporation, defended that they have prepared a budget with a marked social character, which aims to be sensitive to the current situation, and designed to face the crisis with greater investment , which translate into more resources. In addition, the municipal accounts contemplate investments worth 24.2 million euros, and more social spending.

When it comes to spending, the municipal budget will have to face 3.1 million more than this year in 2021. This increase is mainly motivated by the incorporation to the budget of the new contract for the cleaning and waste collection service. For 2021 it has reserved 31.2 million euros, which is almost 4 million more than in 2020. However, the use of the entire item will depend on the implementation of the new contract that will begin to operate progressively. However, the most important expenditure chapter of the City Council continues to be that of personnel, which in 2021 amounts to 80.4 million euros. It rises 1.18% when applying the 0.9% salary increase approved by the State.

A chapter of the municipal budget that increases considerably for next year is that of current transfers, where agreements, aid and subsidies have a place. To this end, the government team plans to allocate 11.5 million euros, 2.8 more than in 2020. Here stands out a Covid aid of 2 million euros, almost 3 million for social emergency aid and aid to IBI payment, among other items provided for by the government team formed by PSOE and Compromís.

When assessing the decrease of five million euros with respect to the accounts of this year, when adding the budgets of the City Council and joint ventures, the fall in the budget of Pimesa is striking, which goes from 19 million with the that it had this year, to 11.1 million by 2021. Of these 11.1 million, 6 million will go to investments, which is practically half what it had this year. The investment planned by Pimesa for 2021 is focused on continuing with the construction of social housing in San Antón, the Elche Campus Tecnológico project, and the urbanization of the E-40 sector, one of the two in which the expansion of Elche Business Park.

The Elche government team, made up of PSOE and Compromís, plan to undertake investments during 2021 worth 24.2 million euros. This item increases 24.2% compared to 2020, and is mainly due to the 9.1 million that will be allocated to undertake Edusi projects, which are financed 50% by the City Council and the European Union, and the 7.9 million of the Building Plan that the Consell puts.

Among the 18 Edusi projects that are to be activated during the coming year are the rehabilitation of the Carrús sports center (544.00 euros), the construction of the inclusive sports hall (1 million), as well as other investments in improving sports facilities in the neighborhoods ( 680,000), the intelligent secure Wi-Fi access system (409,000), the rehabilitation of the Paseo de Germaníes shelter (400,000), and the creation of urban gardens (285,000). There is also the social center of San Antón (1.5 million), the recovery of the historical Pontos and Dins gardens (295,000), an action in the Rastoll garden (540,000), the expansion of the bike lane, or the landscaping of the surroundings from the cemetery (879,000 euros).

Projects that are already underway such as the social centers of Torrellano, El Altet and Arenales, the creation of unique platforms in the downtown area, or asphalt projects are also included in the budget.

The money reserve of the municipal budget that to repay loans falls by 74.6% in 2021. The budget only contemplates an item of 3.1 million euros reserved for this purpose, due to the decrease in debt that has been produced since 2015. Since then the City Council has gone from owing 117.3 million to the banks to having a debt of 19.6 million. The intention of the government team, in this sense, according to Patricia Macià, is “to reduce the debt to the maximum expression”, although it does not rule out asking for loans to finance investments.