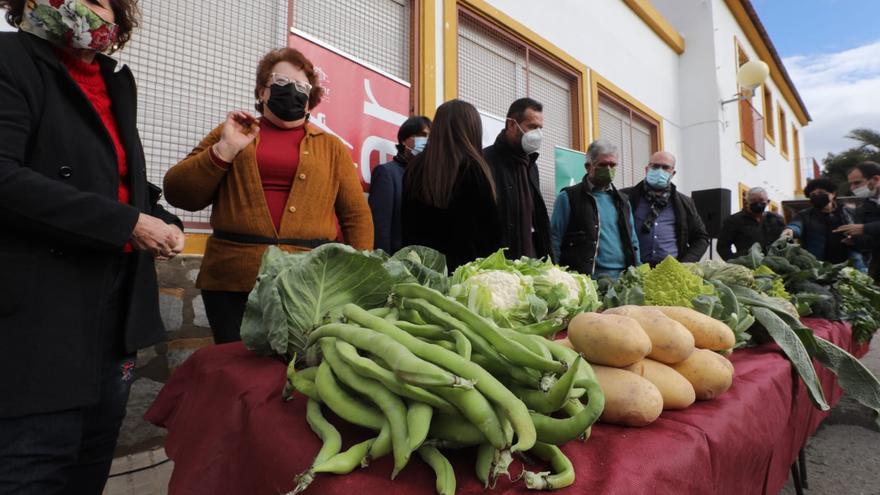 The Camp d´Elx hopes to overcome this winter 21.5 million kilos of vegetables, maintaining the production levels and hectares of previous seasons. This was announced this morning by the organizers of this traditional act, Young Farmers ASAJA Elche and the City Council of Elche, in which they have presented the winter horticultural campaign of this town to the media and society.

“In the Elche countryside, 1,500 hectares of winter vegetables are grown, producing about 20 million kg, with horticultural being the second most representative type of crop in terms of production and occupied area, only surpassed by the pomegranate. Likewise, vegetables have a crucial importance and social role for municipalities and districts of Elche, since the vast majority of harvests are carried out on family-type, small and medium-sized farms, which offer work about nine months a year, from when the plantations begin and until the harvest ends. Likewise, it is important to mention their environmental function due to the action of fixing CO2 that they exert”, pointed out the president of Young Farmers ASAJA Elche.

With some 800 hectares, the artichoke is the most cultivated vegetable in the area. However, this year the combination of dry weather and mild temperatures are to blame that only the 12 million kilos, a figure that represents a decrease in production of 15% compared to previous campaigns. The rest of the winter production of the Elche countryside, such as broccoli, cauliflower, romanesco, broad beans and potatoes, maintain harvest levels similar to 2020.

Due to the measures implemented by the covid-19, this year this event has been held outdoors, on a plot located in the Civic Center of Algorós and, in addition to the mayor of Elche, Carlos González, the Councilor for Rural Development, Felip Sánchez, members of the Government team and the Municipal Corporation, the president of ASAJA Alicante, José Vicente Andreu, farmers and neighbors.

Pedro Valero wanted to highlight the crucial role played by agricultural entrepreneurs in the area, who have continued to produce and offer work, despite the problems that threaten their activity, such as water instability due to the continuous attacks that receives the Tajo-Segura transfer by the Ministry for the Ecological Transition, a source of vital water supply to maintain the important agricultural, economic and social fabric of the Elche countryside; the low prices of some productions; and the disproportionate increase in production costs in agriculture in recent months. “Electric power has become 270% more expensive; diesel used by tractors and other agricultural machines has risen 73%; fertilizers (+48%), water (+33%), greenhouse plastics (+46%) or seeds (+20%). The SMI has also risen 29.7% in the last three years”, he denounced.

Also, Valero has wanted to send a message to the Elche and Alicante consumer to ask them to look for and consume local products, which are already fresh and recently harvested in the markets, ready to consume with maximum guarantee, quality and flavor because “the farmers of Camp d’Elx We are committed to food safety, quality and respect for the environment, contrary to what happens with other products that arrive from third countries, flooding the shelves of large chains and breaking our prices and future possibilities. In addition, without the relevant controls and with traces of substances, banned in Europe for years, that endanger the health of the consumer”.

The event was also attended by the president of the Association of Women and Families in Rural Areas in Alicante, Tere Antón, who highlighted that women are the cornerstone of farms in the province. “They have always been there, but we must continue working to be more visible and recognized, which is why at Amfar Alicante we promote action programs, which have the support of administrations such as the Ministry of Equality”.