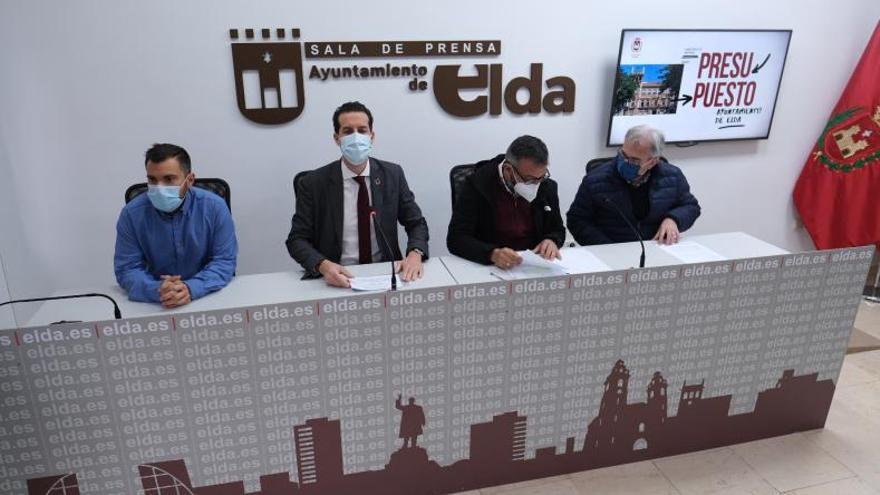 The mayor presented the accounts yesterday accompanied by the councilors of the Treasury, José Antonio Amat, and Citizen Participation, Javier Rivera, as well as by the director of the Management Area, Aniceto Pérez. Alfaro explained that it is about expansive budgets because they experience an increase of 4.75% compared to the previous year and, in addition, they have a strong social component. Something that is due, as the first mayor explained, “to the fact that this government has decided to bet on people in moments as complicated as those we are experiencing as a result of covid-19.” Under this premise, the Social Services item doubles, going from 1,872,000 euros in 2020 to 3,623,000 euros in 2021. An increase that will allow «to continue to launch aid for Eldenses families who are suffering the most from the health crisis , and so that no one is left behind in our city “, Alfaro underlined.

In addition, the good financial health of the City Council, which has reached zero debt, has made it possible not to include any provision for the payment of financial charges this year.

The Municipal Budgets include for 2021 a slight increase in the Public Services item (+ 1.45%), aAlthough the investment chapter is reduced. A decrease that will be offset by the remaining Treasury. Despite this, some committed investments remain, as well as those necessary for the proper functioning of municipal public services. This item includes, for example, the restoration of the Castle and the Participatory Budgets.

Another item that increases significantly is that destined to businesses, SMEs and tourism, also a consequence of the commitment of the PSOE-EU government to support the economic and productive fabric of the city. For this purpose, this area experienced an increase of 34.05% to 1.36 million euros.

In the income chapter, the mayor has highlighted “the decrease in income from direct taxes, specifically for the IBI, which fell by 1.61% as a result of the downward revisions that we have been applying to this tax since we acceded to the local government “, wanted to point out the Councilor for Finance, José Antonio Amat.

As well Income from fees decreased in a very significant way, by 7.73%, due to the cancellation of the terrace fee for the hotel industry, the revision of the market census and the abolition of sports fees.

The Consistory accounts also include a notable increase in income from the Tax on Constructions, Installations and Works as a consequence of the liquidation for the works of the Building Plan.

Rubén Alfaro concluded by recalling that “these are the axes on which the Budgets for 2021 pivot, which together with the investments planned in the Elda Renace Plan and the Edificant Plan, will allow our city the greatest mobilization of its own resources in our history” . They are, in particular, more than 70 million euros to modernize Elda, support the economic and social fabric of the city and help families in times of coronavirus.

Alfaro will carry out his accounts without a single vote against. An achievement that he achieves for the second year in a row. In February 2020, the socialist government of Elda already approved the first budget of the new mandate without any rejection in the plenary session. Alfaro did not need to impose the absolute majority of his 13 councilors because the two majority opposition groups -PP and Cs- decided to abstain, as did the then mayor of Vox and now Not Assigned, while the US councilor, who a month later he joined the PSOE government team, voted in favor of the Budgets.