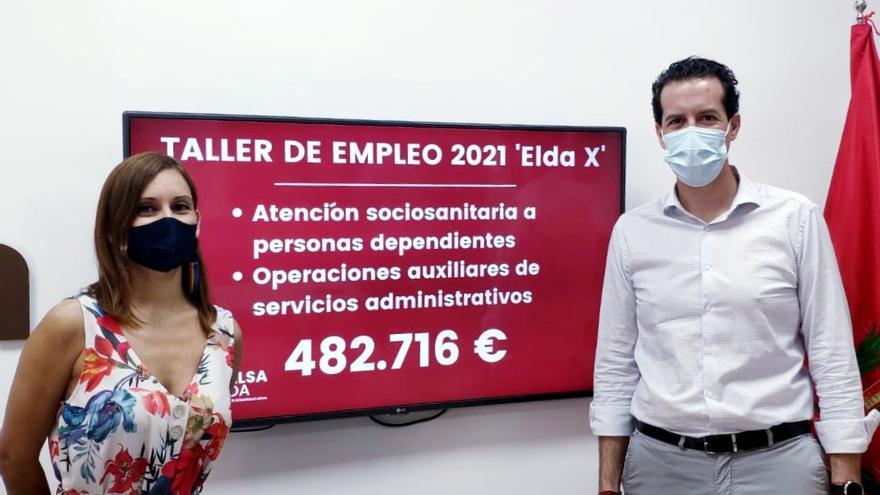 The Elda City Council has hired 42 people through Idelsa thanks to four different employment programs that have a joint budget of close to one million euros provided by the Generalitat Valenciana. Specifically, it is the Employment Workshop X, the T’Avalem II program and the Ecovid and Empuju programs. The Employment Workshop X has allowed the hiring of 23 people over 30 years of age, of which two are teachers and a third is in charge of coordinating the courses. The Workshop consists of two specialties: social health training for the care of dependent people in public centers and administrative assistant training. The Councilor for Economic Development and Employment, Silvia Ibáñez, has explained that “This Employment Workshop is launched with a grant from the Generalitat Valenciana of 482,716 euros. Ten people participate in each specialty, who have been selected by LABORA, and two teachers and a director of the Workshop have also been hired “. The selected persons have signed a twelve-month training and apprenticeship contract. Ibáñez has explained that “It is not just about getting a monthly income, but about obtaining accredited training that will significantly improve access to the labor market”. The subsidy for this Employment Workshop has been awarded in competitive competition with other municipalities throughout the Community and Elda has achieved it for another year thanks to the high score obtained by having, among other things, the Quality Certificate and Equality Plan. In addition, the T’Avalem II program has allowed the hiring of twelve people under the age of 30 to receive training on Administrative Services. The program has a grant from the Generalitat of 240,206 euros and has allowed the incorporation of ten male and female students, a teacher and a director. Finally, the Ecovid and Empuju Programs, endowed with a grant of 200,624 euros, have enabled the hiring of seven people. Specifically, the Ecovid program has hired three bricklayers and two janitors and the Empuju program a lawyer and an economist. The Empuju program is intended for unemployed people under 30 years of age who are registered as job seekers in the LABORA Spaces. The contracts will have a duration of twelve months full time. The objective of the Ecovid program is to employ unemployed people who belong to vulnerable groups for a period of twelve months in the performance of works or services. Silvia Ibáñez has explained that “These are subsidies for an economic amount close to one million euros that have allowed us to hire 42 people. The creation of employment and the generation of an active work environment is one of the priorities of the local government and, in this sense, I want to remember that since the beginning of the pandemic, the City Council of Elda, through different employment programs, has generated I work for more than half a thousand people ”.

Also Read  Editorial ABC: The franchises of the kremlin