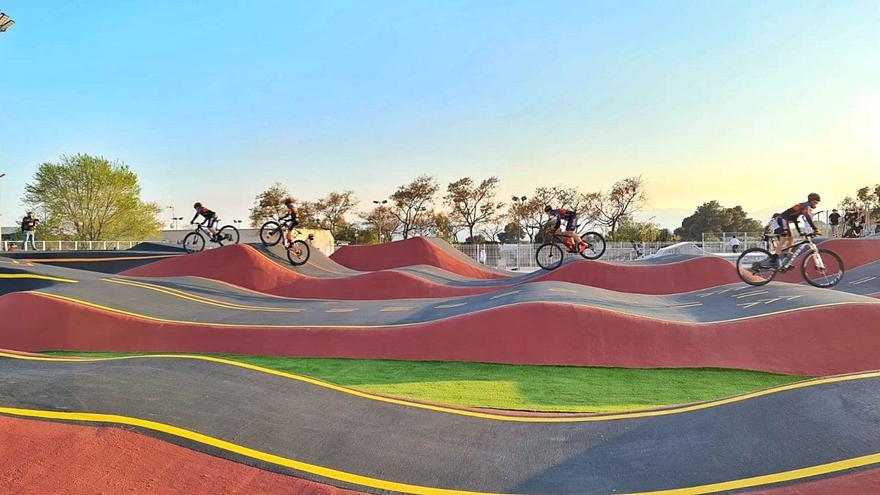 Precisely the union of the new facility with the Skate Park, which occupies an area of ​​800 square meters, and the Vinalofit circuit, with 4,400 meters of surface, form one of the most important sports leisure complexes in the entire Valencian Community.

The Mayor of Elda, Rubén Alfaro, together with the Councilor for Investments and Public Services, José Antonio Amat, and the Councilor for Sports and Contracting, Fernando Gómez, visited the Pump Track yesterday afternoon, coinciding with its opening to the public. Due to the sanitary restrictions imposed by the coronavirus pandemic, no opening ceremony was held but the representatives of the Elda Cycling Club and its BTT section were invited.

“Today is an important day because we have completed a sports leisure area of ​​a public nature and free to use for all people”, highlighted Rubén Alfaro, highlighting “one of the spaces in which the local government believes the most and which has a great future for the city ». It is one of the most important sports leisure areas in the Valencian Community and, according to the mayor, “it comes to confirm the commitment to sport as one of the axes of our policies, providing the city with sports facilities of those that it lacks.

The first athlete to test the installation and, furthermore, advise the successful tenderer during the course of the work was Nico Parres, BMX champion of Spain in 2017 and technical teacher of the “Group driving on bicycles” module of the TCAF training cycle. IES Monastil de Elda.

The Pump Track circuit covers an area of ​​2,164 square meters and has more than 350 meters of lanes, with several straights and curves, obstacles, take-off and landing ramps, as well as rest areas. In total, it is made up of four circuits of different levels, one for children and three linked to each other of medium, advanced and extreme level. It is aimed especially at bicycles, although its use with skateboards, skates and scooters is also allowed.

Among the main recommendations are the mandatory use of helmets and protections, that minors are always accompanied by adults, and the non-use of the enclosure in bad weather conditions.

The Elda Pump Track has cost 180,000 euros, began to be built in December and has directly and indirectly employed more than twenty people. Elda’s many mountain biking fans have been waiting for years for this new sports infrastructure. But its development was blocked in mid-2019 because some of the companies interested in the work challenged the municipal tender, which started with an initial budget of 240,000 euros.