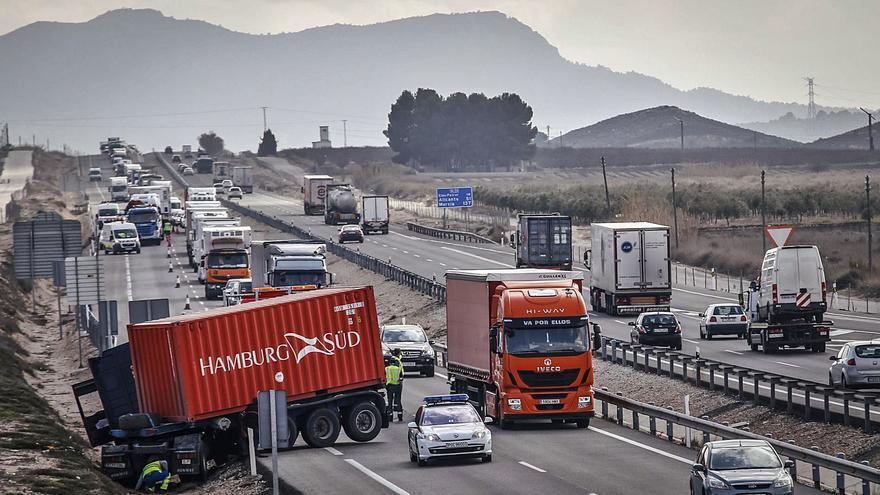 The municipal technical services of Elda are preparing a justification document so that the reform of the A-31 highway in the Villena-Alicante section, taking into account the daily traffic intensity, the load of heavy vehicles, the accident rate and the age of an infrastructure that belongs to first-generation highways. The action, if successful, would be encompassed within the Line of Action 4 opened by the Ministry to move towards safe, sustainable and connected road transport.

Mayor, Ruben Alfaro, points out in this regard that “from Elda we are going to continue working to justify the works of the main mobility artery that backs up the Vinalopó. We need to improve its layout and its safety in the face of the high number of accidents that it unfortunately continues to have. An accident rate that, however, has been reduced in the last year due to the reduction in mobility due to the coronavirus. “But when we manage to overcome the pandemic, the problem of the highway will remain present and that is why we need a definitive solution,” emphasizes the mayor of Elda.

The A-31 is the «great forgotten» of the central government despite being the second most saturated in the province and the first in accident rate. The latest data provided by the Ministry of Development, before the outbreak of the pandemic in March 2020, placed the daily intensity measured in the Villena-Monforte del Cid section at 60,000 vehicles. And of all of them 8,000 were heavy vehicles. By then there were 2,000 more trucks and buses than in 2014.

However, the execution of the reform and improvement works between Alicante capital and the La Roda municipality of La Roda accumulate a fifteen year delay. The Ministry set the amount of the action at 28,413,000 euros with the double objective of adjusting the old route to road safety regulations and contributing, with the construction of a third lane in some sections, to alleviate the problem of collapse that the highway A-31 already suffered then. A decline that continues to be the main trigger for the high accident rate that has also been increasing year after year.

In terms of traffic density, the A-31 is only surpassed by the Mediterranean motorway, the A-7, at very specific points on the route that connects Alicante with Murcia. Far behind are, in average daily intensity, the A-7 inland highway that brings the provinces of Alicante to Valencia through Alcoy, and the branch of the CV-80 that the Generalitat built between Sax and Castalla.

The Alicante-Madrid highway registers an average of more than 53 traffic accidents with victims per year on the 73-kilometer stretch from Villena-Alicante. In the years before the pandemic, firefighters used to carry out three interventions a month to rescue the injured trapped in their vehicles after collisions or exits. The number of fatalities ranged from 4 to 6 per year on average. A black balance on a highway that, just as it passes through the Vinalopó, has five very dangerous points due to its winding route. And in case of rain the risk is multiplied by ten. It should be remembered that the A-31 was built more than 30 years ago and in many sections it follows the old divided route of the old Nacional 330, so it lacks many security measures. However, it maintains a very high pressure from heavy vehicles whose drivers cannot use the third lane on the steep ramps of Portichol de Monforte, Guirney de Petrer and Reventón de Petrer, three of the points where more accidents are concentrated.

A common front to demand the third lane from Fomento

Ciudadanos Elda tried in 2016 to create a provincial platform to demand from the Ministry of Public Works the extension of the Madrid highway with a third lane. The protest campaign “Alicante-Villena 3” hoped to have the support of all the political, social, economic and business forces of the municipalities through which the A-31 -Alicante, Monforte, Novelda, Elda, Petrer, Sax and Villena crosses. – and those indirectly affected such as Aspe, Monóvar, Pinoso, Salinas, Agost and Elche among other locations.

«There are many requests that are periodically launched to demand the improvement of this vial. And we think that it is time for all the municipalities of Alto and Medio Vinalopó and others nearby to get to work together, leaving aside the political colors of each, to achieve a real investment from the State that, once and for all , redesign the route and include a third lane, which is clearly a necessary and essential action ”. This was indicated in 2016 by the mayor Francisco Sánchez, setting himself as the first objective to unite all the mayors around this common front. However, the Cs initiative, like those promoted during the last decade by PSOE and PP, did not prosper either and the A-31 continues to be abandoned.